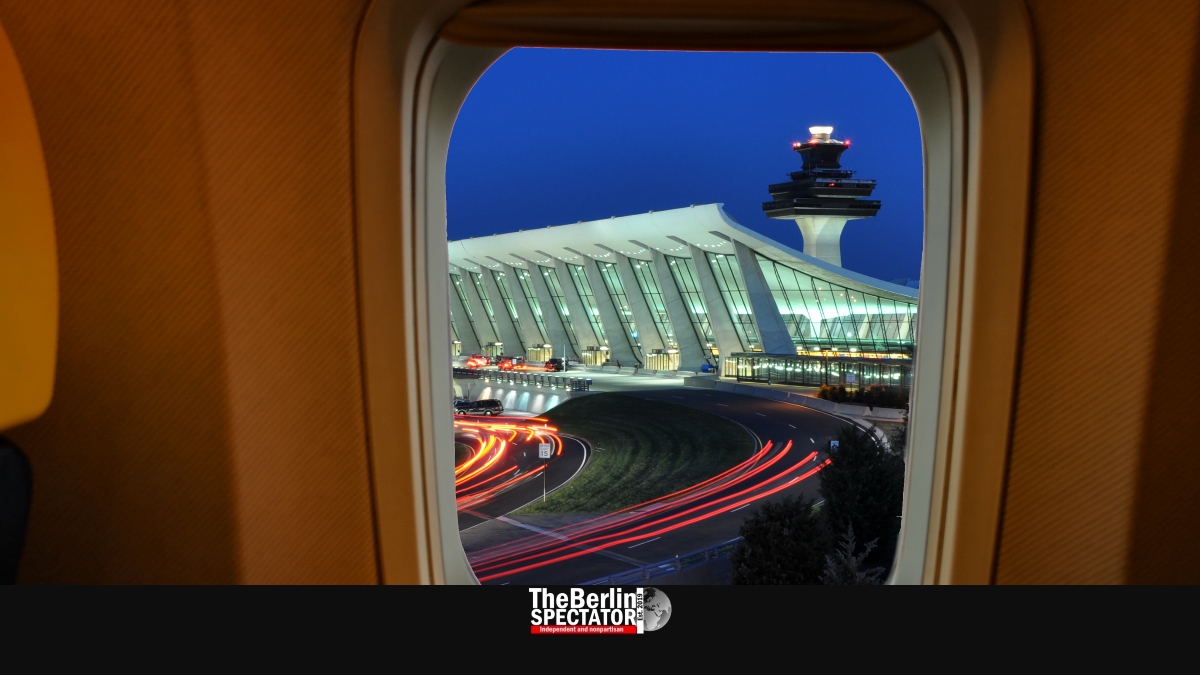 It was about time. Starting later this month, Berlin Brandenburg Airport will finally have direct flights to and from the United States of America. United Airlines is offering connections to Newark (New Jersey) and another important U.S. destination.

Berlin, March 17th, 2022 (The Berlin Spectator) — Two years ago, in March of 2020, Corona made landfall. Suddenly, the few intercontinental flights from and to the Berlin Brandenburg region were stopped along with most inner-German and European flights. Nobody flew anymore. People’s lives were affected by lockdowns and closed borders. The world’s aviation was basically halted.

Now, exactly two years later, just as the Corona infection numbers in Germany reached new all-time highs, United Airlines is relaunching its flights from the Berlin Brandenburg region to the United States of America. When the first Boeing to Newark (New Jersey) lifts off on March 28th at 9:55 a.m. CET, it will be the very first direct flight to America from BER Airport in Schönefeld (Brandenburg), which was inaugurated when nobody needed it, on October 31st, 2020, with a slight delay of nine years.

Until Corona hit, United Airlines had used Tegel Airport in Berlin. This one was closed for good on November 8th, 2020. It is being turned into a refugee welcome center for Ukrainian war refugees right now. Berlin and Brandenburg never had many direct flights to America or other intercontinental destinations because of Germany’s history. When the country was divided, the West German flag carrier Lufthansa was not allowed to fly to Berlin at all. This was only one of the reasons why Frankfurt Airport developed into Germany’s main airline hub with most flights to destinations all over the planet.

March 28th, 2022 is the big day, but the Boeing 767 United Airlines will use needs to get to BER Airport first. How else is it going to pick up its passengers? That is why the flight connection will actually be revived on the eve of the big day, which is March 27th. At 6:05 p.m., the first aircraft on this route is supposed to leave Newark, in order to reach Brandenburg at 7:50 a.m. the next day. Exactly two hours and five minutes later, everyone has to be strapped in for the first flight to New Jersey. Newark is closer to Manhattan than New York’s John F. Kennedy Airport. United Airlines insists it is a good destination, and they are right.

“Finally, Berlin and New York, those two mega cities will be connected again”, Thorsten Lettnin, United Airlines’ Director Sales Continental Europe, India & West-Africa, says. How does this job title even fit on a business card? “We are very much looking forward to that day”. The aircraft they will use, the Boeing 767, has only 214 seats in three classes, namely Economy, Economy Plus with a little more legroom, and United Business which costs a lot more but offers beds to passengers who are willing and able to deal with a higher price tag.

“This flight connection makes a lot of sense”, Lettnin accurately stated at an online press conference. He stressed it was not a seasonal one, meaning it is supposed to be offered for good, on a daily basis. He stressed Newark was an important hub for United Airlines. His company offered a wide range of connecting flights from there, to all parts of the United States. Aletta von Massenbach, the CEO of FBB, the company that runs BER Airport, said the new flight connection was “an important step towards normality”. She stated it was self-evident that the metropolises Berlin and New York City were connected to each other.

It gets better. United Airlines is also preparing a flight connection from Brandenburg to Virginia. BER and Dulles Airport will be directly connected from May 26th, 2022, when the first flight leaves Dulles for Schönefeld at 5:45 p.m., in order to arrive at its destination at 8:20 a.m. the next day. Once the Boeing 767 they will use on this route as well was refueled, cleaned, loaded and boarded, it will return to Virginia at 11:00 a.m. on May 27th, 2022, and get there at 2:25 p.m.. Dulles Airport is relatively close to Washington D.C.. Another airport in Virginia, Washington Ronald Reagan Airport, the only airport in the U.S. that carries the name of two former U.S. Presidents, is a lot closer, but does not accept intercontinental flights.

Bad news, anyone? No problem. Here we go: Those daily flights to Virginia or the District of Columbia will be scrapped on October 29th, 2022. Yes, this is supposed to be a seasonal connection. Still, Aletta von Massenbach is glad about the fact that “Berlin is on the international roadmap again”. The first flight to Newark is supposed to be waved off by none other than Berlin’s Governing Mayor Franziska Giffey.

United Airlines is part of the Star Alliance, just like Lufthansa. At BER Airport, any connecting flights will be offered by the German carrier. On the other side of the Atlantic Ocean, United is responsible for those. Just store your hand luggage in the overhead compartment, fasten your seatbelt, relax, have a cookie and enjoy your flight.

Kool & the Gang to Bring the Funk to Germany