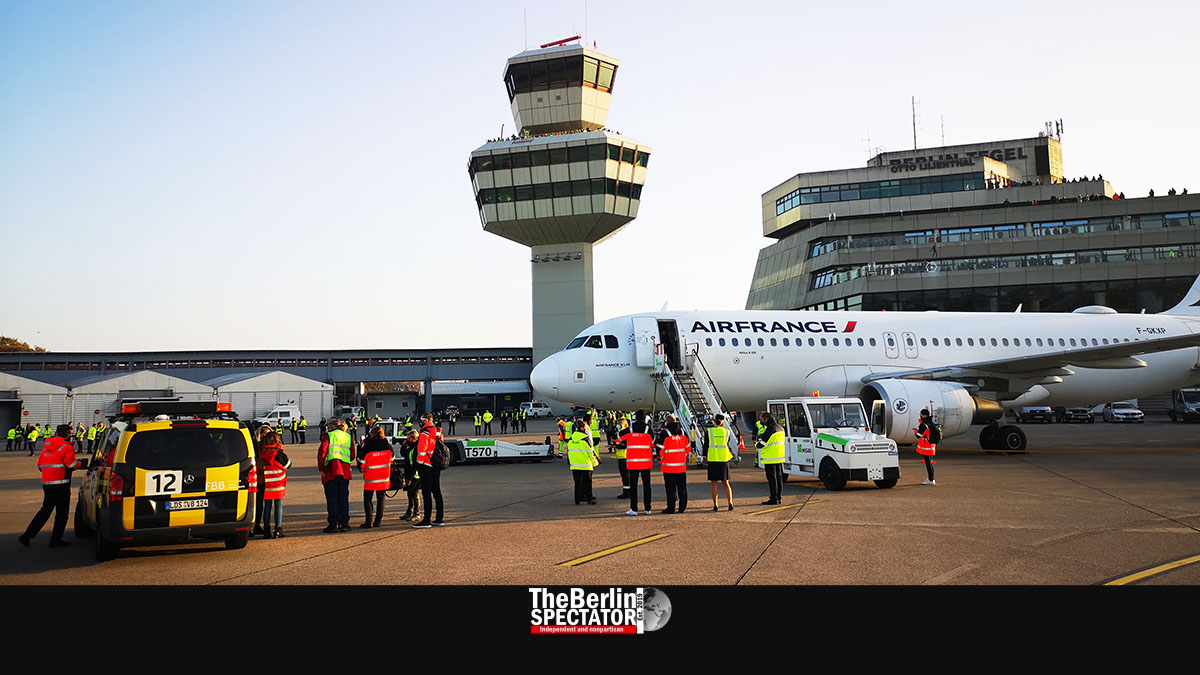 A French flight crew, hundreds of employees, one Governing Mayor, one airport boss, an Ambassador, passengers and onlookers were part of quite a ceremony at Tegel Airport on Sunday. It was time to say goodbye.

Berlin, November 8th, 2020 (The Berlin Spectator) — On Sunday, the entire city was at Tegel Airport to witness the last time a passenger jet would race down the runway and lift off into the sunny evening sky over Berlin. Charles de Gaulle Airport was the last destination, for a good reason. Sixty years ago, on January 2nd, 1960, the first passenger flight that landed here was sent by Air France as well. Of course it came in from Paris. Mais, oui!

It was no coincidence Berlin’s French friends operated both the first and the last flight. Tegel had become their sector after World War II. Anne-Marie Descôtes, the French Ambassador to Germany, said Tegel Airport was “part of the mutual history that connects Berlin to France.” The fact that the last flight had left for Paris illustrated the bond.

An Airbus A320 with the Air France livery was in the center of the intention, when dozens of people gathered on Tegel Airport’s observation deck, on the tower and on the tarmac. Germany’s Federal Police put on a good show by circling Tegel Airport with four helicopters. The fire brigade raced back and forth on the premises with sirens, just to say goodbye to TXL, which is — or was — Tegel Airport’s IATA code.

The boss of all major airports in the Berlin Brandenburg region, Engelbert Lütke Daldrup, was there. From now on, there is only one airport left for him to manage, namely BER. After Sunday’s Air France flight from TXL to CDG, the new airport in Schönefeld replaced all airports there used to be.

Lütke-Daldrup called Tegel Airport an “architectural icon”. A special chapter of traffic history in the capital region had just ended, he said. For decades, Tegel had been the gate to the world. “That is why there could not have been a more fitting goodbye than an Air France flight.”

Berlin’s Governing Mayor Michael Müller was busy shooting selfies with the French Airbus. Everyone on site took turns holding signs that read “Danke TXL” or “Last flight”, including several beautiful French flight attendants. They probably wondered whether the Germans make such a fuss for every flight they welcome and see off.

Tegel Airport had been extremely important for Berlin and it had had a symbolic significance, even beyond air traffic, Müller stated. But the Governing Mayor also talked about the airport’s future. ‘Berlin TXL – The Urban Tech Republic’, a research center and industrial park, is supposed to grow here.

While Michael Müller answered interview questions, hundreds of employees wanted to say goodbye as well. They populated the tarmac. At the same moment, the passengers of the last flight boarded the Airbus and the cockpit crew members went through their taxi checklist:

The question whether pilots use checklists in all situations, including eating or going to bed, cannot be answered here. But, at Tegel Airport, the crew definitely had many things on their minds. An Airbus A320 is not a bus, but it was treated like one. The pilots had to follow several ‘Follow Me’ vehicles for a round trip across the tarmac before the aircraft got a shower from the fire brigade. They even had to cross the aircraft bridge Tegel provides. Going through all of this and blowing out a ton of kerosene was their way to say “thank you”.

Once no vehicles were in the way anymore, the Air France Pilot could finally set takeoff thrust and get out of there. The second the last wheel detached from the runway, Tegel Airport was not really an airport anymore. They have to keep it in service until May, because of some weird German law, but all Berlin flights will be landing at — or taking off from — BER Airport, the eighth wonder of the world, from now on.

Related features and articles? No problem. Everything about airports in and around Berlin can be found here.