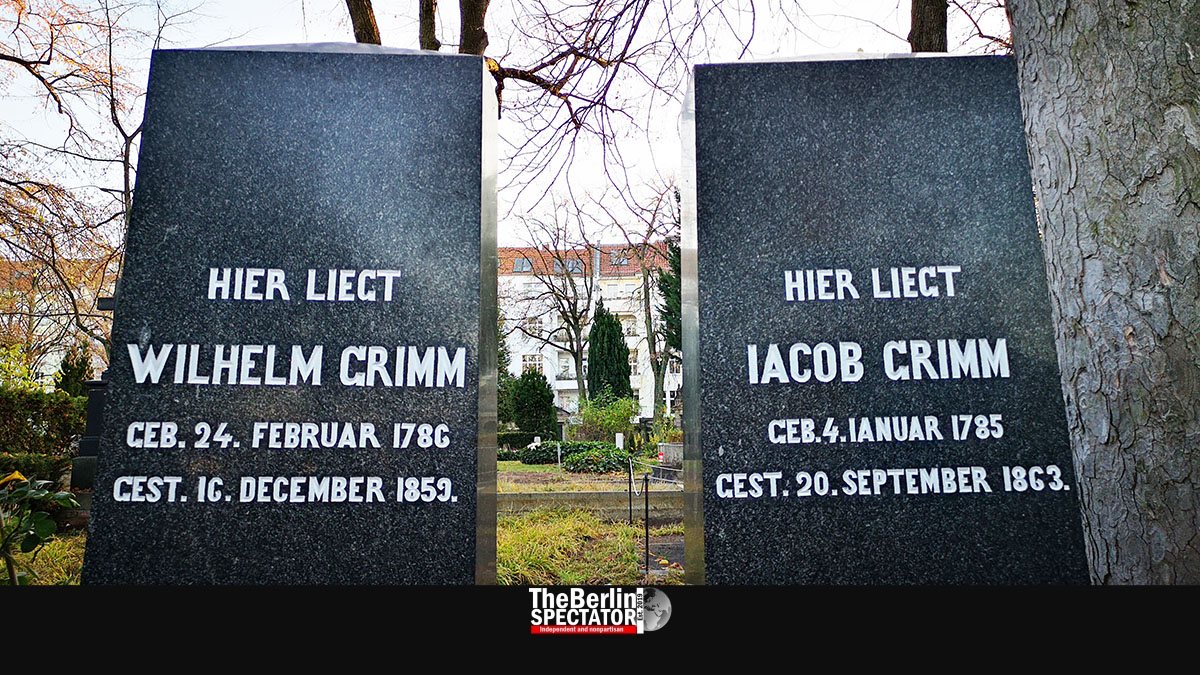 Many famous authors, composers, musicians and politicians are buried in Berlin. For instance, the Brothers Grimm’s graves of honor are located here. They are not alone.

Berlin, November 26th, 2020. Update: November 20th, 2022 (The Berlin Spectator) — Berlin accommodates the graves of hundreds of celebrities. Some of them look truly beautiful and get a lot of sunlight. Others seem more modest. There are cemeteries with many celebrity graves. Others do not have any.

Most Berlin cemeteries are nice. Many have maps at their entrances. That way, finding celebrity graves is a lot easier. Most cemetery gardeners will gladly provide information too. There are surprises. For instance, the Brothers Grimm are buried in Berlin. This is something even some Berliners do not know.

Berlin has countless graves of honor. The list has 97 pages and some 680 entries. This means that the city state of Berlin takes care of them. While regular graves can disappear after a few decades, depending on the next of kin, graves of late artists and other famous persons remain where they are, for centuries.

This applies to the Brothers Grimm’s graves at Alter St. Matthäus Kirchhof in Berlin’s Schöneberg borough. They are being trimmed on a regular basis and their grave stones look like new, even though the fairytale authors and lexicographers Jacob and Wilhelm Grimm died in 1863 and 1859, respectively.

In a way, the Brothers Grimm were the J.K. Rowlings of the 19th century. They are behind ‘Cinderella’, ‘Hansel and Gretel’, ‘Little Red Riding Hood’, ‘The Wolf and the Seven Young Goats’ and countless other fairytales millions of children have listened to when they were read to them by their parents, grandparents or older siblings.

The same cemetery in Schöneberg features a memorial for the men who tried to assassinate Nazi Germany’s dictator Adolf Hitler in 1944. The stone with their names is not a grave stone. Right after their execution, they were actually buried here. But, a day later, Nazi leader Heinrich Himmler had their remains unearthed, burned and their ashes scattered.

Jacob Ludwig Felix Mendelssohn-Bartholdy might be the most famous person buried in the German capital. The composer, pianist, conductor and painter was born in Hamburg in 1809. He spent about two years of his life in Britain. After suffering several strokes, Mendelssohn-Bartholdy died in Leipzig. He was buried at Berlin’s Dreifaltigkeitsfriedhof I. A small building at the cemetery offers an exhibition about him. His grave is marked by a modest stone cross.

The late federal minister Egon Bahr is buried at ‘Dorotheenstädtischer Friedhof’, while the late former Chancellor and Governing Mayor Willy Brandt’s grave is located at ‘Waldfriedhof Zehlendorf’. This is where the singer and actress Hildegard Knef is buried as well. Otto and Gustav Lilienthal, two brothers and flight pioneers, are buried in Berlin too. So are Samuel Fischer, who founded one of Germany’s most important publishing houses and died in 1934, as well as the late Rock musician and singer/songwriter Rio Reiser, who was born as Ralph Christian Möbius. He died in 1996, at age 46. His biggest solo hit was ‘König von Deutschland’, ‘King of Germany’.