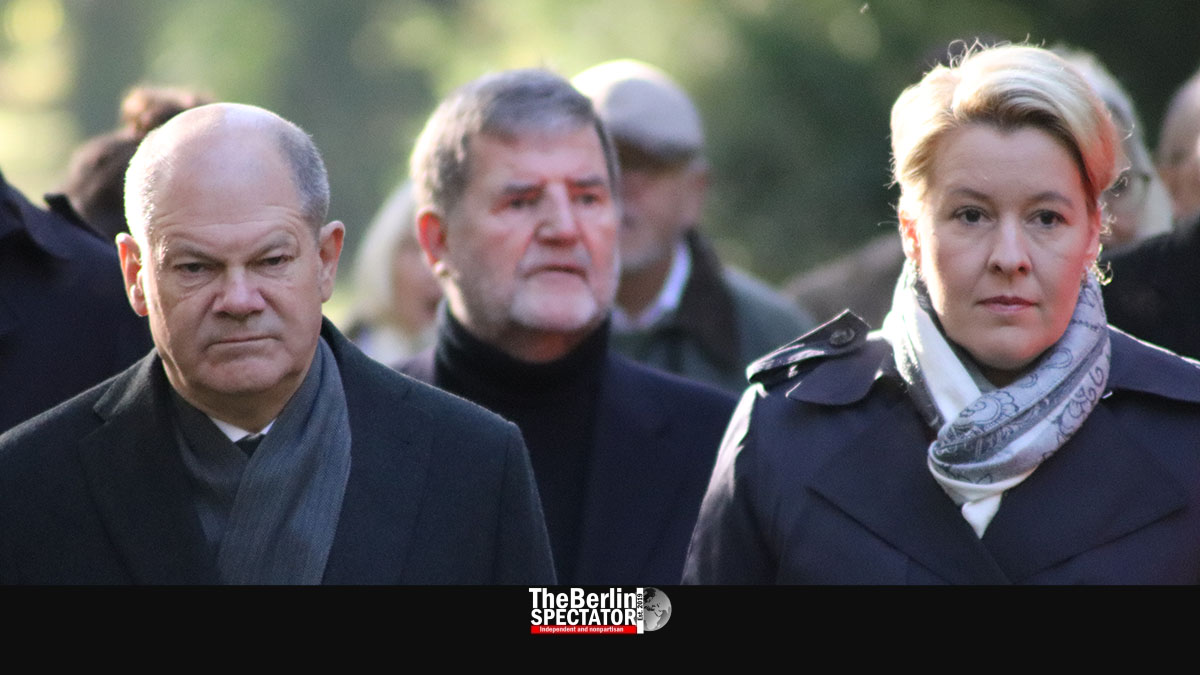 Thirty years ago, West Germany’s fourth Chancellor Willy Brandt died. Today, leaders of his Social Democrats laid wreaths at his grave in Berlin. Olaf Scholz was among them.

Berlin, October 8th, 2022 (The Berlin Spectator) — Before 8:00 a.m. this morning, Wolfram Hoppenstedt, the Executive Director of the Willy Brandt Foundation, was busy taking care of Willy Brandt’s grave at Berlin’s picturesque ‘Forest Cemetery Zehlendorf’. He removed leaves and made room for numerous wreaths that were delivered one by one, every few minutes.

Two of them were provided by foundations, including the one Dr. Hoppenstedt runs, another one by the Governing Mayor of Berlin, Franziska Giffey. A fourth one said ‘Der Bundeskanzler‘, the Chancellor. Willy Brandt was Chancellor of West Germany, also known as the Bonn Republic, from 1969 to 1974. Long before, from 1957 to 1966, he was Governing Mayor of West Berlin, meaning he was both Scholz’ and Giffey’s predecessor.

In between, Brandt served as Foreign Minister under the Christian-Democratic Chancellor Kurt-Georg Kiesinger. The government coalition Willy Brandt headed as Chancellor was ‘red-yellow’, meaning the liberal party FDP was his junior partner. In 1974, he had to step down because of a major scandal: Günter Guillaume, a contributor Brandt cooperated with closely, turned out to be a spy of the communist German Democratic Republic (GDR). In spite of its name, it was about as ‘democratic’ as Venezuela, Belarus or North Korea.

Willy Brandt is still considered one of the great Chancellors of the free and democratic Federal Republic of Germany. There was criticism too, but Brandt’s ‘Ostpolitik’ (‘eastern policy’) opened the doors to improved relations with Eastern Bloc countries including the GDR. Germany’s reunification might not have happened if Brandt had not broken the ice. The Berlin Wall fell in 1989, fifteen years after Brandt’s resignation, when the conservative Helmut Kohl was Chancellor.

On December 7th, 1970, Brandt was in Warsaw in order to sign the Treaty of Warsaw in which West Germany and Poland agreed to non-violence and the existing border, 25 years after the end of WWII. On the same day, he visited the Warsaw Ghetto Uprising memorial. In front of it, he kneeled down and observed a moment of silence for Nazi Germany’s Jewish victims. This powerful moment, know as the Warsaw Genuflection, has not been forgotten until today.

Today, at the ‘Forest Cemetery Zehlendorf’, Olaf Scholz, Franziska Giffey, the SPD’s Chairlady Saskia Esken, Wolfgang Thierse and other prominent Social Democrats came to a short commemoration event, thirty years after Brandt’s passing. They laid wreaths, observed a moment of silence as well, and left to start another busy day in times of crises.