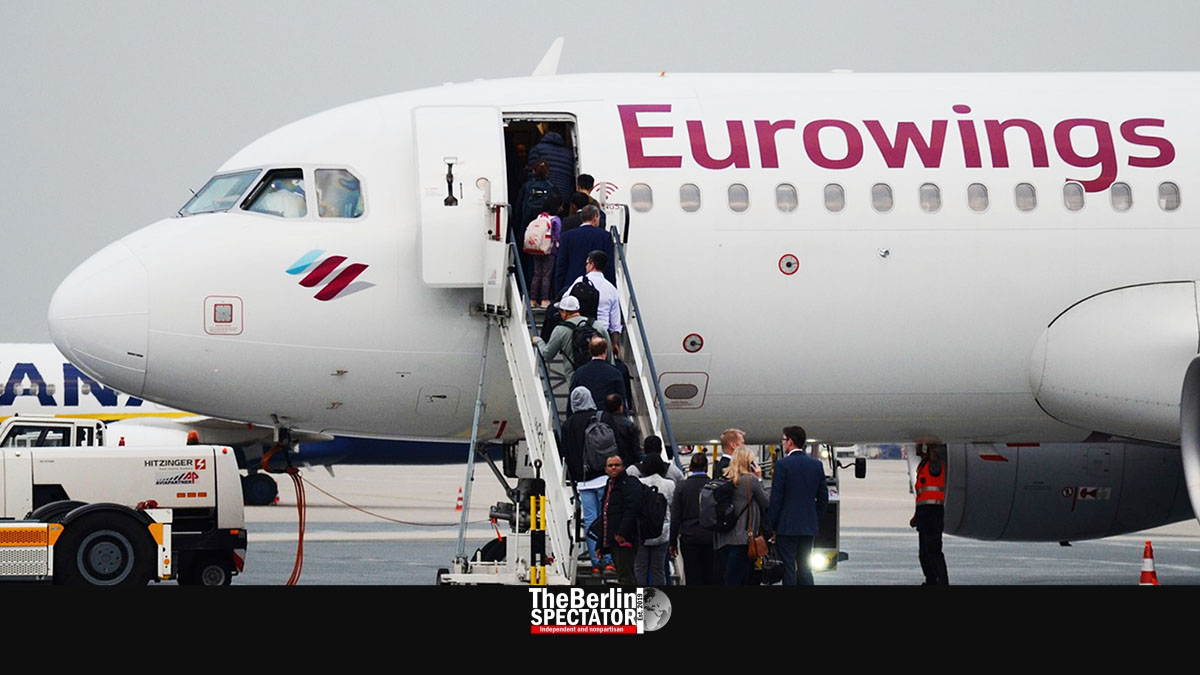 While Ryanair is decreasing the number of flights it offers from and to BER Airport near Berlin, Eurowings is taking the opposite approach. From March of next year, Lufthansa’s subsidiary will have an extended flight plan.

Berlin, November 22nd, 2022 (The Berlin Spectator) — “Others are pull back, we are growing”, Jens Bischof, the CEO of Eurowings, says. What he means: Because of high airport fees, the big competitor Ryanair chose to decrease the number of flights it offers from or to BER Airport in Schönefeld, Brandenburg, while his company seems to intend to fill part of the vacuum the Irish colleagues are leaving behind.

Eurowings announced what it calls “attractive direct flight destinations”. Those include airports in southern Europe, but also in the very north. They would probably meet flying reindeer and Santa Clause up there if those flights were available right now, but the new flight plan is supposed to kick in late March of 2023.

At this stage, three aircraft owned by Eurowings are stationed at BER Airport, which replaced Schönefeld Airport next door and Tegel Airport in neighboring Berlin in October of 2020. Now, the airline will add a fourth one. In spring, they are supposed to have six planes at Berlin Brandenburg Willy Brandt Airport, which is this hub’s full name.

Eurowings announced “almost thirty” flight rules, some of which were still being planned and chosen. This is unconventional. Usually, airlines announce routes that were added to their flight plans already. “Berlin is a tourism magnet and one of Europe’s most interesting metropolises, both culturally and historically”, Jens Bischof accurately stated. Therefore, it was a consistent step for a German airline to add to the routes it offered in the capital.

Aletta Von Massenbach, the CEO of FFB, the company that runs BER Airport, agrees. She said the doubling of Eurowings’ offers at the capital’s airport was a “strong sign”. She thanked Eurowings and Lufthansa Group for the extension of their flight plan and the trust they had put into BER Airport and the capital region. As a matter of fact, BER is in financial trouble and needs to be bailed out all the time.

So far, Eurowings offers flights between BER and the following destinations:

These are some of the destinations Eurowings will be adding in March:

Have a good flight and don’t forget to fasten your seatbelts. Masks are not required on aircraft right now.