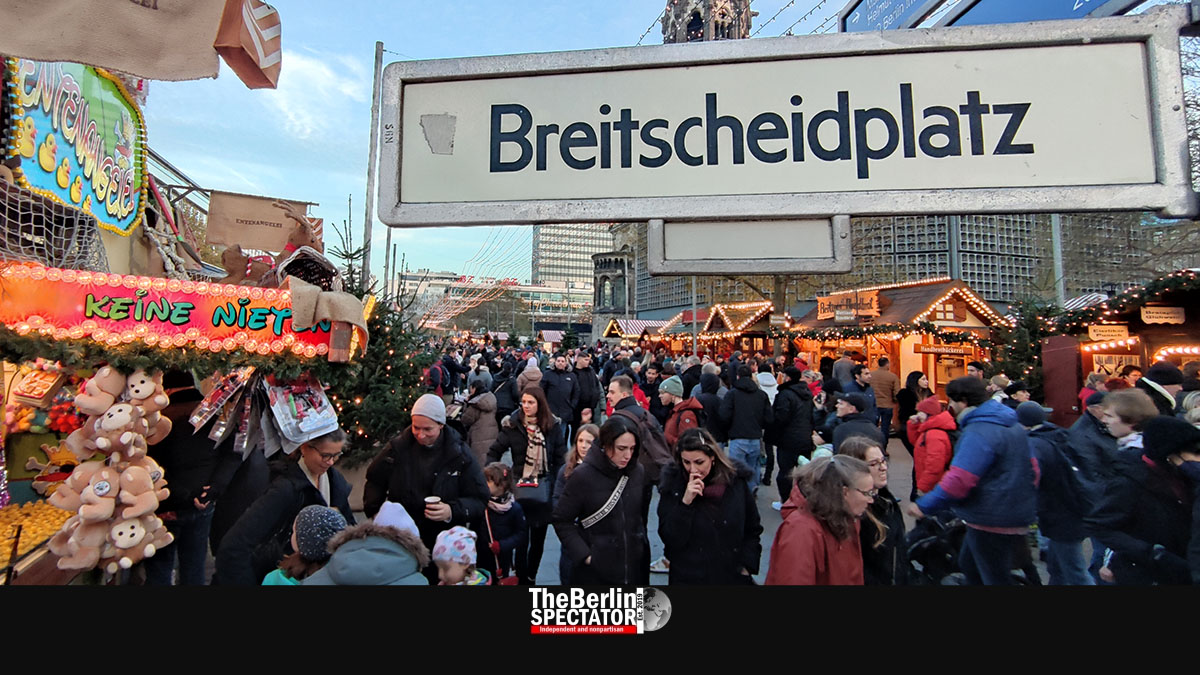 Berlin has countless Christmas markets. The one at Breitscheidplatz square is nice because of its location and aura. There is a sad aspect as well.

Berlin, November 28th, 2022 (The Berlin Spectator) — The Christmas market at Breitscheidplatz is the fourth one The Berlin Spectator is reviewing, after the one at the State Opera, the one at Red City Hall at the market at Charlottenburg Palace. Set up around Kaiser Wilhelm Memorial Church, which was hit by bombs during WWII, this market’s location is more than interesting. The temple’s damaged spire has been retained. It is a memorial that shows what wars lead to.

Right here, at one of Berlin’s most important landmarks, the Christmas market brings a lot of light and color to the rather grey square. Because there are so many lights here, visitors will probably forget about the ongoing energy crisis while they walk by all of those stalls. There is a huge choice of food, including corn cobs, all kinds of treats based on cheese, baguette, fried potatoes and grilled meat.

Baklava and apple tea are being offered at a Turkish stand. Next door, they have truckloads of roasted almonds, candied apples and all of the stuff that is being offered at all Christmas markets. On Sunday, lots of children convinced their parents to get them candy floss, but where did they wash their sticky hands afterwards? We will never know.

The Christmas market at Breitscheidplatz is more about food than about presents, but they do offer t-shirts with rather stupid quotes printed on them, fancy Christmas tree decoration as well as hats and scarfs. There is one little carousel for children and a stall at which they are supposed to catch plastic duckies with little fishing-rods in order to win cheap plastic toys.

Six years ago, on December 19th, 2016, an Islamist terror attack took place here. The culprit, Anis Amri, stole a heavy truck by murdering its driver. Then, he drove the vehicle right into this Christmas market. Twelve visitors were crushed under the truck and killed. Amri managed to flee, but was shot to death by the police in Italy a few days later.

Photos of some of the victims are displayed at a little commemoration site on the steps to Kaiser Wilhelm Memorial Church. Since 2017, this Christmas market is protected by anti-terror barriers that prevent any vehicle from coming close to the visitors. Of course, the question is how useful these expensive barriers are as long as most other Christmas markets in Berlin do not have them. On Sunday evening, the police raced to the market at Alexanderplatz square after a caller made a terror threat on the phone. Later, the alarm was called off.

The Christmas market at Breitscheidplatz is the kind of place shoppers and other passers-by or residents who live in the area would enter. It is not really comparable to the more special ones at Charlottenburg Palace, Red City Hall or the State Opera, but it does not have to be. Besides, this one offers lots of nice photo opportunities.

Berlin: A Quiet Evening at the Wonderful Christmas Market at Red City Hall