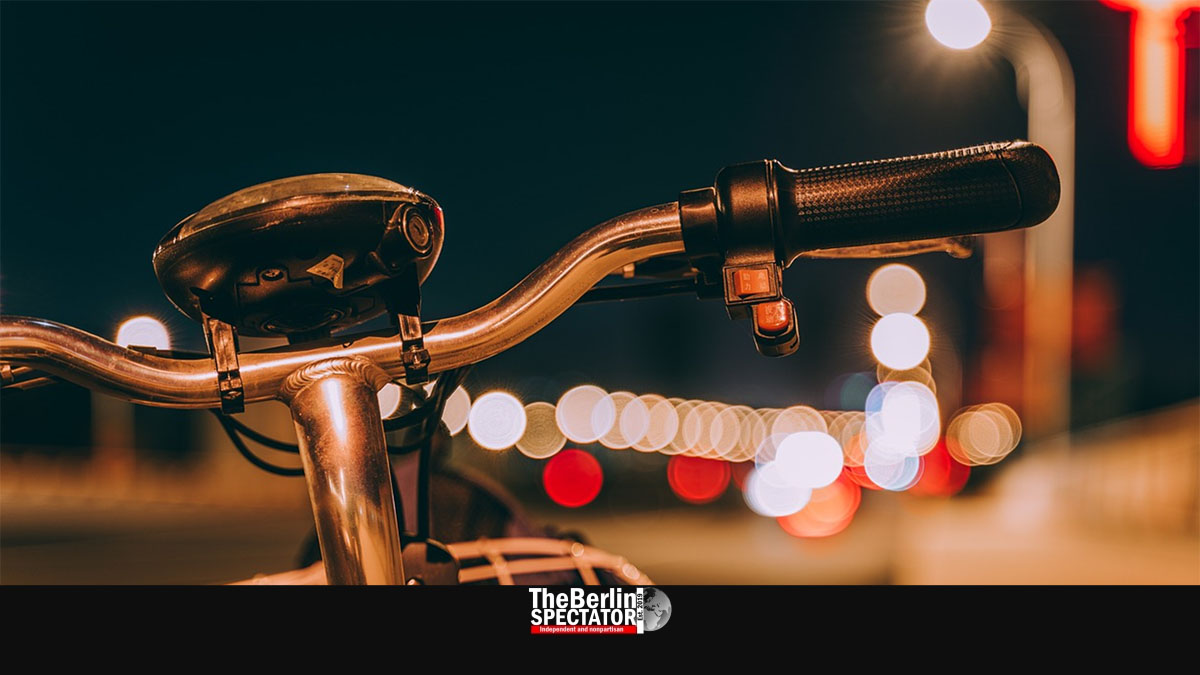 In Berlin, the bike theft situation is not improving. But cyclists can reduce the risk by taking things into their own hands. We spoke to a bike vendor, a bike leasing company, a bike association and the police.

Berlin, November 4th, 2022 (The Berlin Spectator) — There is nothing better than racing your bike across the countless potholes on the many 1980s bike lanes Berlin still has. Once you leave those behind and reach the newly installed bike lanes in red or green, you will feel like you are riding on a thick layer of butter. This is how smooth they are.

Berlin could be a perfect cycling city, and it probably will be once the Senate implements its plans. Ten bicycle highways are part of those. Seven of them are in their pre-planning stages after lengthy feasibility studies were conducted. These highways will give cyclists the possibility to race through the city from north to south, from east to west, or in any direction they choose.

Berlin is on the right track in this regard. A modern and safe network of regular bike lanes in the entire city, with thousands of kilometres in total, is another project the Senate and districts are preparing. Things will definitely improve, but they take time. Giving pedestrians and cyclists more room on the streets of Berlin is one aspect included in the mobility transition plans especially the Berlin Greens keep on talking about. At some point, nobody will have to ride on those old, narrow bike lanes anymore, because they will be replaced in the coming years.

But, even if we are lucky enough not to have our tires cut all the time, in spite of the fact that there are Berliners who seem to feel the urge to throw their empty glass bottles on bike lanes, we have to face the reality: Not only our tires, but our bikes are in danger. Why? Because we live in Germany’s bike theft hotspot.

Once you lock your bike to a cycle rack or a stable metal fence at the supermarket in Prenzlauer Berg, at your kid’s music school in Kreuzberg, next to some cool pub in Friedrichshain or in front of your elegant workplace in Mitte, it might be the last time you see it. The bike theft situation in Berlin is worse than most of us think. Far too many velocipedes vanish like a fart in a ventilator factory.

When your cruise ship gets stolen, call the Navy. If your Boeing 747 disappears while you are having lunch, you can track it on radar and send some F-35s to get it back. Car theft cases are more complicated. So is bike theft. The best protection will not guarantee your nice new bicycle, or the scrap heap you are riding, is safe. The good news? There are a few things we can do to decrease the risk to some extent.

Looking at the numbers will convince us we really have to protect our modern day horses on two wheels. Last year, 5,251 bicycles were stolen in Frankfurt am Main and a few more in Munich, according to Statista. Cologne’s 6,538 stolen bikes still look sort of harmless compared to 8,213 of them that disappeared in Leipzig. Hamburg, Germany’s second-largest city, registered as many as 14,297 bike thefts last year. Add more than 10,000, and you will get to Berlin’s number. In the capital, 25,438 bikes were stolen in 2021. This level is only a little lower than it used to be in pre-Corona times.

Statistically speaking, 70 bikes disappear every day, or 3 per hour. Berlin reports more bike thefts than the entire country of Austria. The Berlin Senate’s numbers show there are hotspots within the big hotspot. Pankow, where 3,500 to 3,800 are stolen every year, is one of them. So is Mitte, with up to 3,600 bike thefts per year. Friedrichshain-Kreuzberg looks pretty bad too, with about 3,800 stolen bikes per year. More bad news? Here it is: Only 4.6 percent of all bike theft cases in Berlin were solved in 2021.

It happens to so many Berliners all the time. Some years ago, gangs of bike thieves entered backyards all over Berlin, grabbed several locked bikes, threw them onto a truck and disappeared, as the 81-year-old Neukölln resident Irene Ehrmann remembers. Only some theft victims will be lucky enough to find their bikes after they disappear into thin air.

Once in a while, the police share success stories. They probably wish they could present more of them. One of those happened in Tempelhof the other day, where a 29-year-old woman noticed her bike was gone. A few days later, she saw it in an online sales ad. Her boyfriend set up an appointment with the seller and she informed her police precinct. The ‘buyer’ who actually went to the appointment was an undercover cop. He arrested the seller. In his apartment, another stolen bike and more evidence was found. It is unclear whether he was a thief who worked on his own or a member of a gang. According to the authorities, specialized gangs from Eastern Europe are active in Berlin.

The problem will not just disappear, if nothing changes. If things change substantially, it will not completely evaporate either, but there are ways to get the number of cases down. First of all, we can make a difference by protecting our bikes. We may not be able to rule out thefts completely, but we can at least give the thieves a headache and decrease the probability.

Jens runs a bicycle shop called “Du und Ich” in Erich-Weinert-Straße in Prenzlauer Berg. He says bike owners should get two locks, one for 100 Euro and one for 50 Euro. Each time they park their bicycles, they should lock each wheel and the frame to stable objects. “This will not give you full protection. It is all about making sure it takes thieves longer to open the lock with their angle grinders.” The longer it takes, the higher the probability they will get caught.

“Other than that, you can put a fake GPS sticker on your bike, to deter thieves. This might work in about 50 percent of all cases”, Jens states. “Sure, you can use an actual GPS tracker, but where are you going to put it? In the rear light? Thieves will find it. If you put it into the frame, you will have issues charging it, because getting it out of there is difficult.” Jens does not like alarms built into bike locks either. “They will go off when someone touches it by accident.”

At the German Cyclists Association (ADFC) in Berlin, Max says his organization offers coding. This measure has two advantages, he explains. First of all, the bike can be identified as yours if it shows up at some bike flea market or in an online shop. Secondly, it might deter thieves because they know they cannot remove the code easily, which means trying to sell the bike can get them into a lot of trouble. According to Max, 10 percent of the bike’s value should be invested into its lock.

A bike insurance like Enra may not really protect our bikes, but at least our wallets. The monthly fee will be below 12 Euro for a bicycle that costs 500 Euro, including the lock. For an e-bike worth several thousand Euro, the fee will at least double.

Of course, there are ways to lease bikes with included insurances. Emily works for the Dutch company Swapfiets in Berlin. She says all bikes they give to customers are insured. They can pay extra for a supplementary insurance that will get rid of the personal contribution, or they will have to come up with 40 to 220 Euro themselves if the bike they leased is stolen, depending on the model.

The authorities can and should step up their fight against bike theft too, especially in Berlin. Earlier this year, the city state’s prosecution announced it would treat this kind of offense like organized crime, instead of like a bagatelle, as the RBB radio and TV network reported.

Who are the thieves? According to the Berlin Police Department, almost 95 percent of them are male. Emancipation does not seem to work too well in crime. Of course, these numbers only apply to the few culprits who were caught. Some 28 percent of them are under 20 years of age. More than two thirds, 69.9 percent of the perpetrators, are registered in Berlin.

A bit more than half are foreign nationals, mainly from Eastern Europe, and about 13 percent were identified as consumers of hard drugs, meaning drug-related crime does play a role here. For the BPD, spokeslady Heidi Vogt stated there were both individuals and groups of people who stole bicycles. Apparently, gang members often have different roles. One of them is on the lookout, the next cracks the lock open, and another person takes the bike away.

The Berlin Police Department has an explanation for the very low detection rate in regard to bike theft: They say there usually is no evidence at all. Burglars who break into apartments sometimes leave DNA traces or fingerprints, but bike thieves do not. In most cases, they even steal the remainder of the locks they break. And even when they do not, all the officers can do with them is determine the kind of tool they used to crack them open. What are they going to do? Arrest all suspicious angle grinders?

Of course, the conditions in Berlin help bike thieves more than bike owners. Countless bikes are parked at many locations, meaning a thief who is busy opening a lock looks like a bike owner who wants to go home or to the next pizza parlour. The police say this was why passers-by could not identify thieves easily.

Heidi Vogt likes GPS trackers more than Jens, the bicycle dealer, does. She says they did help the police. Locating both the bike and the thief was a lot easier in cases in which trackers were involved. But those gadgets could not replace premium locks or locking bikes properly. Like the ADFC, the police label bikes. This is one way of increasing the detection rate. The BPD organizes labelling events every few days. They can be found online, by searching “Berlin Polizei Fahrradkennzeichnung”. Wow! This must be one of the longest words ever.