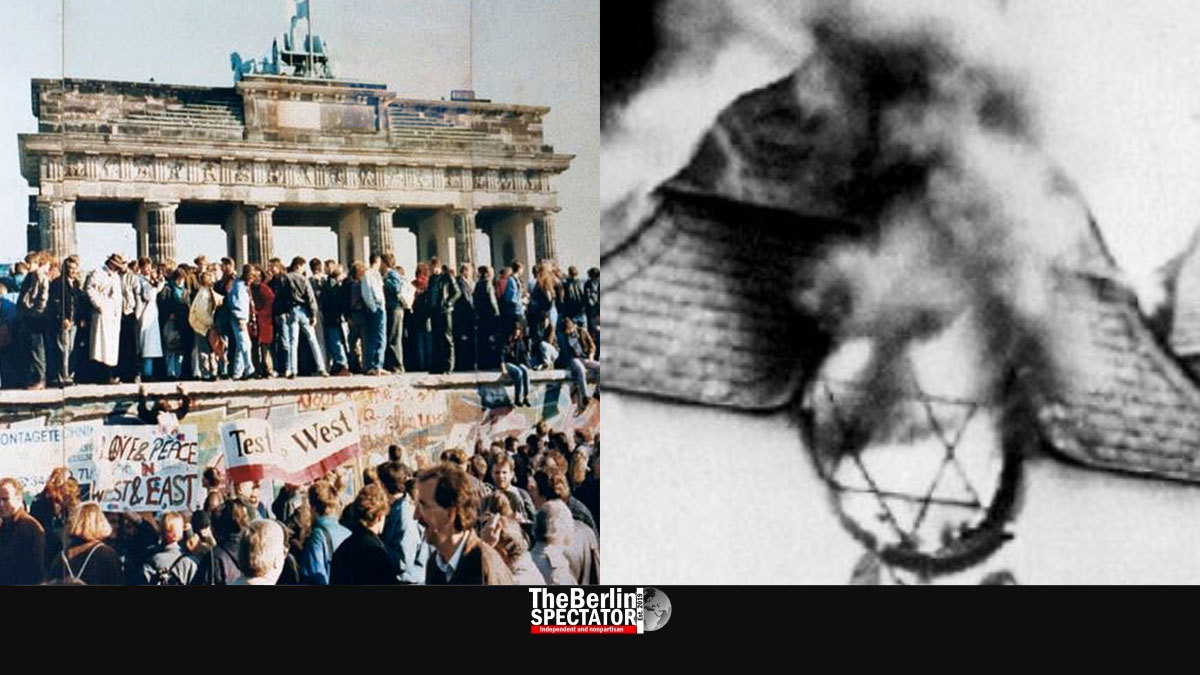 Berlin, November 9th, 2021 (The Berlin Spectator) — In Nazi Germany, the November Pogroms took place 84 years ago, to the day. Hundreds of Jews were murdered by Nazi mobs just because of their ethnicity. Due to the constant danger they were in and the horror they were forced to endure, there were Jews who committed suicide. The murders, the attacks, the humiliation and the atmosphere of hate were too much for all members of this minority.

German Nazis set 1,400 synagogues and other Jewish establishments on fire or destroyed them in other ways in the Night of Broken Glass. Jewish cemeteries and Jewish-owned businesses were ruined as well. So were apartments and houses Jews lived in. This day marked the transition from the discrimination German Jews were confronted with to their expulsion and systematic annihilation. On November 9th, 1938, “the sky above Berlin was blood-red“.

Fifty-one years later, on November 1989, the unthinkable happened again but, this time, it was a very positive event. The Berlin Wall, which had separated Germans from Germans, fell. Citizens from East Germany and West Germany walked right through it, from both directions. They stood on top of it, damaged it using pickaxes and celebrated a day many thought would never come. Twenty-eight years after the Wall’s construction, its fall on November 9th, 1989, marked the beginning of the end of the GDR along with its mean regime and communism. Germany’s reunification was less than a year away.

Berlin’s Governing Mayor Franziska Giffey will be part of a commemoration event on the 33rd anniversary of the fall of the Wall at its memorial at Bernauer Strasse. She said November 9th, 1989, had been a lucky break in Germany’s history and “a day of joy for our city”. Overnight, the Berlin Wall had fallen, and only a few months later, the country had been reunited.

Today, it was important to see the value of freedom and to live up to the responsibility that arose from it. “This is why we have to keep the memory alive, of all the sorrow that was caused by the Wall” and the regime that had been responsible, for decades. At the same time, it was good to be proud of everything that had been achieved due to mutual efforts in both East and West, she said.

Franziska Giffey was also scheduled to take part in the Jewish Congregation’s commemoration ceremony for the victims of the November Pogroms of 1938 which will include a wreath laying, 84 years after it happened. “All Holocaust victims had their personal plans, wishes and dreams”, the Governing Mayor said on the eve of the ambivalent day in Germany’s history. Those had been wiped out as well.

“We are fighting antisemitism, right-wing extremism and populism”, Franziska Giffey stated. “Each antisemitic attack is one attack too many, each insult is one insult too many. We know what they lead to.” The fact that this fight needed to be fought over and over was disgraceful, the Governing Mayor said. “Remembering November 9th is something we owe to the millions who were murdered.”