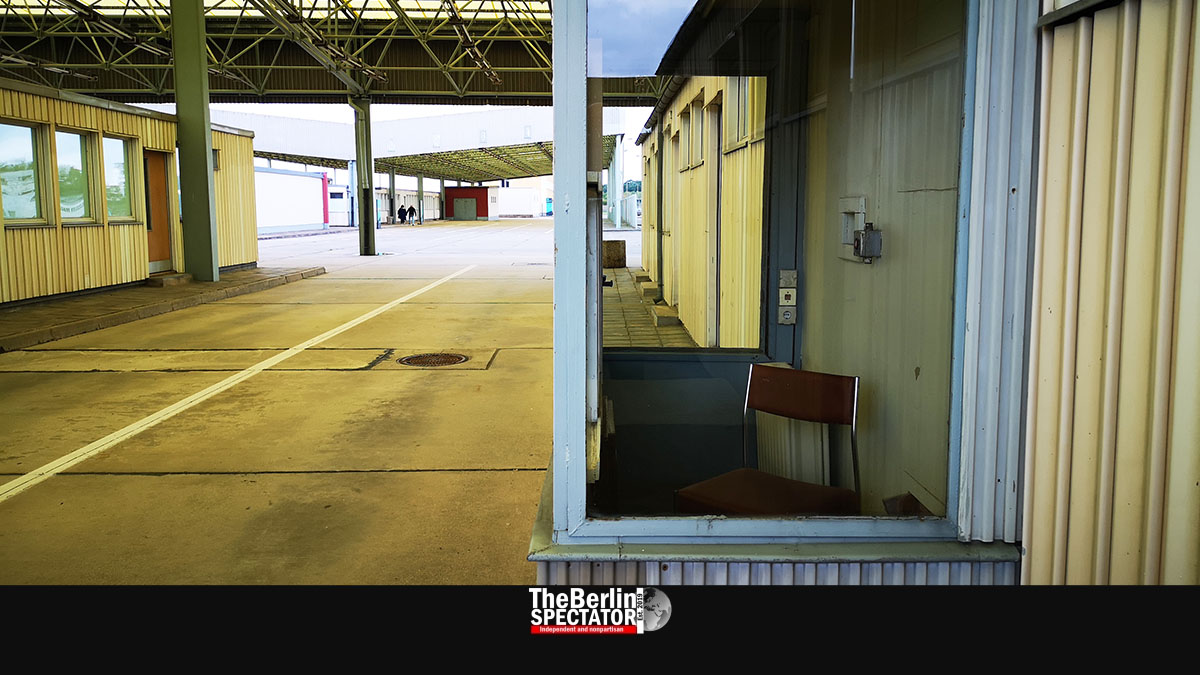 Thirty-three years ago, on November 9th, 1989, the fall of the Berlin Wall was the beginning of the end of Germany’s division. Traces of those difficult times, when most GDR citizens were caged in their country, can obviously be found in Berlin, but also in Marienborn.

Berlin, October 2nd, 2020. Update: November 1st, 2022 (The Berlin Spectator) — Growing up close to the inner German border was weird and dangerous. This applied in both West and East Germany, but in different ways. The 1,393 kilometers (866 miles) of border installations had one main purpose: Like the Berlin Wall (read separate feature Following the Berlin Wall Path: Where the Remainder is a Reminder), they were supposed to keep GDR citizens in their country.

The author of these lines was 12 years old when he took part in a cycling trip from Hamburg to the inner German border in 1977. Those GDR border guards on the opposite side were rather close. They were holding machine guns and staring at the Western cyclists as if they were zoo animals. The staring part applied the other way around as well.

While the border zone in West Germany was easily accessible, this was not the case in East Germany. Hardly anyone was allowed into the GDR’s forbidden zone. Inhabitants of villages along the border had the right to be there, but they could not receive any visitors from other parts of the country. These villagers’ homes were something like a tightened, even stricter version on the GDR. Border guards showed up all the time.

The GDR’s communist regime called this weird border the “anti-fascist protective rampart”. High-ranking officials were allowed to cross it from East to West and vice versa. So were spies, elderly GDR citizens and celebrities the communist regime in East Berlin trusted.

It was different the other way around. West Germans could visit their relatives in the GDR, but they needed to put a lot of effort into getting a permit and visa first. Generally, anyone was allowed to use the four transit routes through the GDR’s territory, to get from West Germany to West Berlin or the other way around, except for GDR citizens. Taking that trip by train was another option.

So, there were big differences, but also aspects citizens from both versions of Germany had in common. All Germans were in danger during the Cold War. The missiles on both sides of the Iron Curtain would have killed most Germans first, had there been a thermonuclear exchange. Germany was in the middle of it all.

Today, Germans below 35 years of age were either not born yet when the inner German border existed, or they do not remember those times because they were babies or toddlers. To them, the idea of having two versions of Germany must be even weirder than to those who do.

To Westerners, crossing the GDR’s borders on their way to West Berlin was quite an adventure. Those chronically unfriendly border guards would ask them where they wanted to go. The right answer was “West Berlin”. Travelers who said “Berlin” would get into trouble. “Return to the end of the waiting line and think about your answer”, some would be told.

Berlin was the capital of the GDR, from the perspective of those East German border guards. And West Berlin was the decadent Western island located right in the middle of the GDR.

On the transit route, West Germans were allowed to take breaks at service stations, but talking to East Germans was forbidden. The notorious State Security was on site. On the road, the People’s Police tried all it could to catch West Germans speeding. They even hid their patrol cars under piles of leaves in fall.

Allied soldiers were allowed to enter the GDR, more or less as they pleased, but they were checked by Red Army soldiers. At the border checkpoint between the West German town of Helmstedt and the East German settlement of Marienborn, the Russians had a Soviet Allied Control tower. They knew American, British and French soldiers used the freedom of movement they had for spying on the Red Army and the GDR’s National People’s Army.

Today, those border checkpoints are hardly visible. But slowing down on the Autobahn at their locations does help. At the former Helmstedt/Marienborn border checkpoint, a small museum shows what it used to look like. Those tiny cabins that contained one chair, a radiator and a red button used to be populated by GDR border guards who searched forbidden items and refugees hidden in vehicles. They are still intact. So are the big installations in which trucks were checked.

Going to that little museum brings back memories of those weird times, when the German people was separated, when East Germans loved their country so much they had to be caged in it, when the Cold War could have become a ‘hot’ one at any moment, when attempts to cross the inner German border illegally could result in death.

When people tried to flee the GDR, when some managed to get away and others were jailed in State Security prisons or shot to death, when visiting the GDR was like time travel, and returning to the Federal Republic as well. When everyone was supposed to be equal in the GDR, but few were far more equal than most others.

When fences, mines and spring guns separated families, friends and lovers, when they prevented dreams from coming true, when the mean regime in East Berlin exploited, incarcerated and spied on its own citizens, when calling for freedom of speech and democracy was dangerous in the East.

Exactly thirty-three years ago, the Berlin Wall and the inner German border finally fell, and thirty-two years ago, the reunification took place. The latter is still not completed in the sense that there are still differences. Germany is still in the process of growing together. How long will it take?