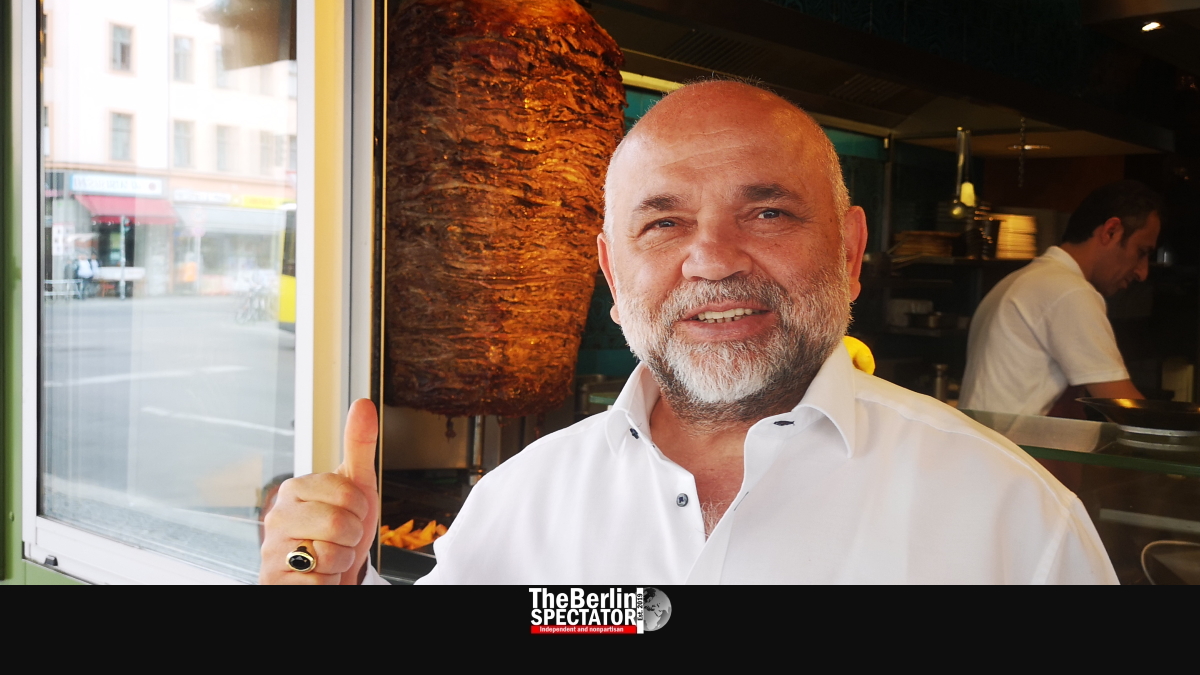 There is doner kebab and there is excellent doner kebab. Both categories are being sold in Berlin. The Aygün brothers offer the good stuff.

Berlin, May 26th, 2020. Update: Berlin, June 30th, 2021 (The Berlin Spectator) — Berliners and most of the millions of tourists who used to visit the German capital before the Corona crisis hit know what doner kebab looks, smells and tastes like. The meat is being grilled on giant vertical rotisseries and then served in pita bread and with salad and sauce. Of course there are doner platters too, the luxury version.

At many kebab stands in Berlin, lower quality ingredients are being used. There, the ‘meat’ they put in the pita bread consists of minced beef stretched with flower and unidentifiable additives. This kind gets its taste from the sauces and the salad they add.

High quality doner kebab is different. It contains actual meat, lamb or beef, and a range of excellent sauces and salads. There are big differences indeed. Good doner kebab tastes like a fine restaurant dish, while the cheaper versions mainly fill up the consumer’s stomach without arousing the senses.

Doner kebab is related to tacos al pastor, a popular Mexican dish. The difference is that the Mexican Catholics use pork, while the Turkish Muslims do not. Greek gyros is similar too. So is shawarma.

Doner kebab was co-invented in Berlin by Mehmet Aygün, one of six brothers who are running eighteen restaurants and two hotels in the city by now. Located in Berlin’s Kreuzberg district, Adalbertstrasse is a historic street because this is where the first doner kebab place was opened more than forty years ago. It still exists.

On a nice day in late May of 2020, Saim Aygün (see main photo at top of page), one of the brothers, talks to the few guests who enter one of the family’s ‘Hasir’ restaurants, the one at Adalbertstrasse 10, shortly after the end of the first Corona lockdown. He asks people if they want some tea and whether their food is tasty. It is a rhetorical question since everything served at ‘Hasir’ is not only tasty but delicious.

In Adalbertstrasse, just two buildings further north, at number 12, there is another ‘Hasir’ restaurant. This one is special. First of all its interior is very elegant. Secondly this is the first restaurant the Aygün brothers ever opened, in 1978. It is also the place where Mehmet Aygün co-invented doner kebab a long time ago, meaning it all started right here, in Kreuzberg.

Anyone who looks across the street from any of those two ‘Hasir’ restaurants will see a place called ‘Hasir Burger’. It is not a coincidence. When we consider that ‘Paglia’, an Italian restaurant at the corner of Adalbertstrasse and Oranienstrasse, is theirs too, it looks like the Aygüns are pretty much controlling the entire block. Some say this applies to the entire city of Berlin.

The Aygün brothers created a big endeavor in Berlin, and an unmatched success story. When Mehmet Aygün arrived, back then in the 1970s, he worked at a Turkish restaurant owned by someone else until he had collected enough money to establish his own. The proceeds from that place were invested into another one. When Aygün could not handle the business on his own anymore, he talked his brothers Hüseyin, Muzaffer, Naim, Saim and Temel into coming to West Berlin from their home at the far more quiet Turkish Black Sea coast.

Back then, Berlin was very different from today. American soldiers and many other West Berliners loved doner kebab, the new Turkish fast food creation. Today, the entire city consumes a lot of it. Because more than one million tourists per month needed to be fed too, before Corona chased them away, there are far more than 1,000 doner kebab stands in Berlin.

The six Aygün brothers are the pioneers in this field. They are living the American dream in Germany. From rags to riches. Within the large Turkish community in Berlin, there is envy but also admiration. They made it. Not everyone in the city has eighteen restaurants and two major hotels in the best locations.

At Adalbertstrasse 10, Saim Aygün, a likeable man whose German is still a little shaky, explains how his ‘Hasir’ restaurant chain exclusively uses doner kebab meat it makes itself. At their own kitchen at Berlin’s central market, employees start piling up the best lamb and beef available for the rotating spits in their establishments at 6:00 a.m. every day. They do not touch the wide-spread stretched ‘chicken meat’ or anything of the kind.

Some ‘Hasir’ restaurants, such as the one at Adalbertstrasse 10, do offer takeaway doner kebab too which they sell through a window. The salad they add here looks very fresh, just like the meat. For a regular doner kebab in bread, they charge 4.50 Euro (4.93 U.S. Dollars or 4 Pounds Sterling) or 5.00 Euro (5.48 Dollars or 4.45 Pounds) for consumers who want to sit down at one of their tables.

Lower quality doner kebab in Berlin is usually 3.50 to 4 Euro (3.84 to 4.39 Dollars or 3.12 to 3.65 Pounds). The additional Euro ‘Hasir’ charges is definitely well spent. Anyone who bites into one of their special kebabs will know why. Their restaurant menus look very tempting. Saç Kebab, Şiş Kebab and Karışık Izgara are just three out of a million good choices. Who could resist soft veal or lamb of the kind they are offering, or their yogurt sauce with garlic? Yes, this is a rhetorical question as well.

In the Agün family, the next generation is already part of the business. Aytac Agün, Mehmet’s son, manages their Berlin hotels. More sons, daughters, nieces and nephews are getting ready to enter the kebab business too.