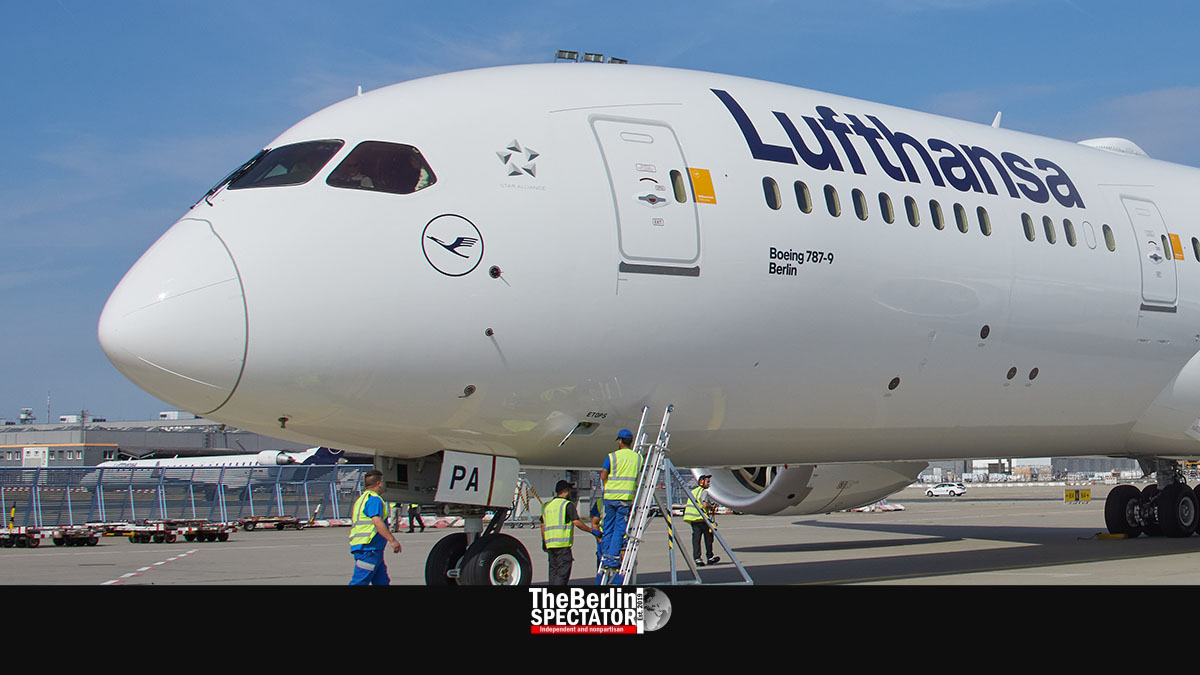 Berlin’s Governing Mayor Franziska Giffey is scheduled to name a Boeing 787 after the city she is governing. The ‘Berlin’ is quite an aircraft. Its owner, Lufthansa, is in the process of testing the big bird extensively.

Berlin, October 16th, 2022 (The Berlin Spectator) — When you have a new aircraft and call it ‘Berlin’, why would you have it baptized Brandenburg? Well, that is because Berlin’s two airports were shut down for good, Tempelhof in 2008 and Tegel in 2020. (Read separate feature ‘Tegel Airport: Sixty Years Later, the Last Flight is Gone‘) Tegel Airport was replaced by BER in Schönefeld, a town in neighboring Brandenburg, two years ago, almost to the day.

Klaus Wowereit was lucky. He still had Tegel when he baptized an Airbus A380 with the tail number D-AIMI ‘Berlin’ ten years ago, in May of 2012. Since this aircraft is rotting at some Spanish aircraft parking lot since March of 2020, the name was vacant, until Lufthansa decided to give it to its first Dreamliner, the D-ABPA it paid 292.5 million Dollars for. What an appropriate name, considering the plane is about as sleek and sexy as the city. Wowereit’s successor Franziska Giffey and Lufthansa’ CEO Carsten Spor will conduct the Boeing’s baptizing at BER on 10:30 a.m. on Monday.

Right now, the poor aircraft is being abused. Since this is the first Boeing 787 Lufthansa received, its pilots do not have any experience on this model, meaning quite a few of them need to be certified for this model and collect flying hours. The more captains can do takeoffs and landings, the better, also because as many as 31 more Dreamliners are supposed to be delivered soon.

On Friday, Carsten Spor presented the D-ABPA to colleagues at Frankfurt Airport, a hub the plane will be seeing a lot. In spite of the extremely high electricity prices, the 787-9 was illuminated by dozens of spotlights during the event. Then, the aircraft was taken for an endless series von spins. Today, it is scheduled to visit Bremen and Rostock Airport. The latter spot does offer a lot of room due to the fact that it hardly has any commercial flights. Here, the big Boeing is supposed to perform several touch-and-go stunts and burn a lot of rubber and kerosene in the process.

Why Lufthansa’s first Boeing 787-9 seems to be getting a lot more attention than the first four Airbus A350s the German airline received earlier this year is unclear. Both models, one by the American manufacturer Boeing in Everett, the other by its European competitor Airbus, are the future. These twin-engine jets are much lighter and far more economic than ‘kerosene suckers’ like the Boeing 747, the Airbus A340 or the A380. Their passengers will be leaving smaller CO3 footprints.

Originally, Lufthansa’s elegant Dreamliner was supposed to be delivered to Hainan Airlines in China. Since they cancelled the order to due all of those problems caused by the Corona pandemic, Lufthansa jumped in. Now that the German flag carrier has a new livery, it will get a new interior design too. The ‘Berlin’ is one of the first planes to have it. The advantages include more room, more comfort, more elegance. Did we mention the fact that the cabin looks really nice? Up to 294 passengers per flight will confirm this claim.

The delivery of the ‘Berlin’ marks another step in Lufthansa’s recovery. This year, 75 percent of the number of flights the airline had in pre-Corona times are supposed to take off and land. Next year, the Germans want to increase the volume to 87 percent. Lufthansa is expecting profits again, two years after the Berlin government had to bail out the company with a multi-billion Euro investment.

In spite of the fact that the Boeing 787-9 was designed for long-distance flights, the ‘Berlin’ is supposed to race back and forth between Frankfurt Airport and Franz Josef Strauss Airport near Munich for two months, for training purposes. Then, starting in December, the D-ABPA will do what it does best, which is taking passengers across big oceans comfortably, economically and in style. Lufthansa intends to use it for its route between Frankfurt and Newark, New Jersey.