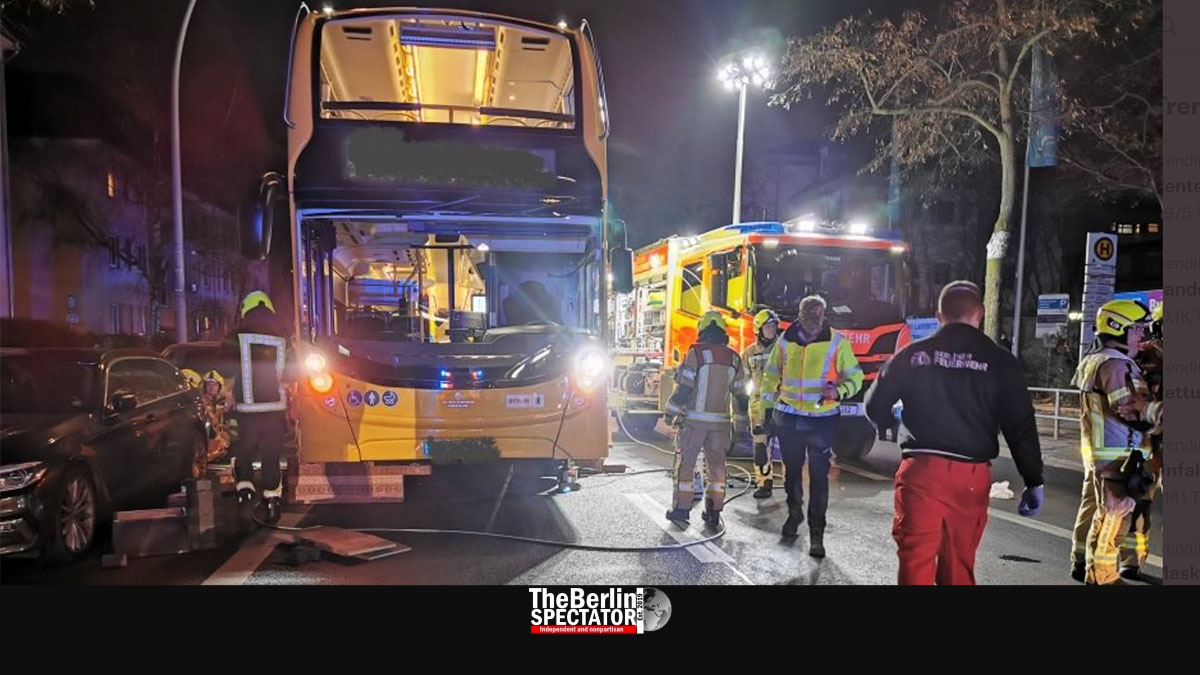 In Berlin’s Lankwitz borough, a 15-year-old girl lost her life after being run over by a large bus. Another girl of the same age was injured badly. At this point, it is unclear how exactly the accident happened.

Berlin, December 11th, 2022. Update: 9:51 a.m. CET (The Berlin Spectator) — On Saturday evening, Leonorenstrasse, a rather quiet street in Berlin’s southwestern part, became the scene of a bad accident. Two teenaged girls were hit by one of those big double decker buses Berlin’s main public transport provider BVG uses. Both victims were trapped under the heavy vehicle.

According to the authorities, the first emergency call came it at 6:42 p.m. The Berlin Fire Department sent out a technical vehicle and three fire engines. Because no ambulances were in the area at the time, several vehicles from other parts of the city were ordered to proceed to Leonorenstrasse. It reportedly took 20 minutes for the first two ambulances to arrive, which is extremely long. In Germany, they usually arrive a lot faster.

Another few minutes later, a rescue helicopter landed near the location of the accident. Once the two girls were freed from under the bus, one of them was dead. The other adolescent was taken to a hospital with serious injuries. According to the Berlin Police Department, those injuries are not life-threatening. The 62-year-old bus driver and several other people on site who witnessed the terrible accident, including more adolescents, were in shock and needed to be treated as well.

The Berlin Fire Department has declared states of emergency multiple times in the past few years. It happened during more difficult parts of the ongoing Corona pandemic, but also these days. Many sick leaves, but also many RS Virus cases seem to be causing issues right now, meaning the number of ambulances in Berlin is limited.

At this point, it is not known how exactly this sad accident happened. Leonorenstrasse has two bus lanes. Did the victims enter the street without looking? According to the police, they may have wanted to cross the street at while the traffic light for pedestrians was red. At the same moment, the bus left a bus stop close to the intersection with Calandrellistrasse.

Another accident that involved a child happened in Berlin’s Mitte district on Saturday. The world’s first electric fire engine crashed into a passenger car at an intersection. One passenger of the car, a 6-year-old girl, was injured. So was a fire fighter. The damage to the electric fire engine is substantial. It’s price was 1.8 million Euro (1.9 million U.S. Dollars or 1.55 million Pounds Sterling).