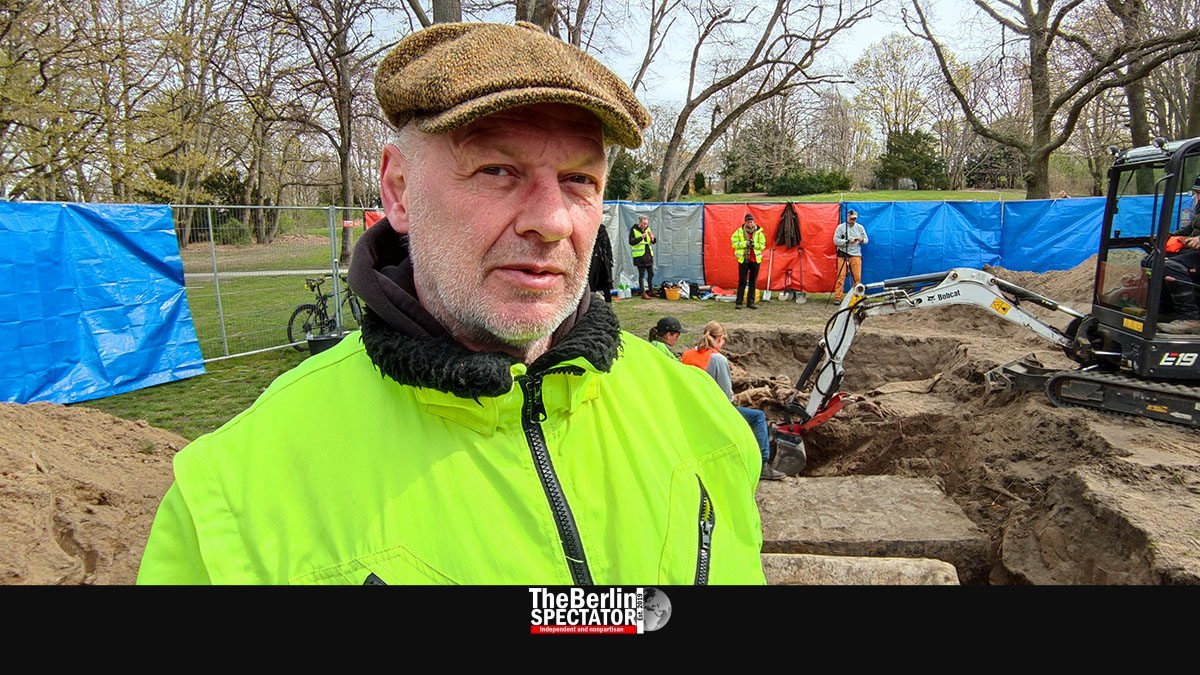 In Mexico, archaeologists find pyramid cities that were inhabited by the Aztecs. In Egypt, they dig out ancient hieroglyphics and decipher them. Berlin is somewhat different. Here, they followed a hunch Dietmar Arnold had and looked for a white bull made of marble.

Berlin, April 13th, 2022 (The Berlin Spectator) — The painter and sculptor Ernst Moritz Geyger, who lived from 1861 to 1941, created a big marble sculpture in 1901. It was a larger than life-sized white bull. The impressive sculpture, which was was 4 meters (13 feet) long and 2.5 meters (8 feet) high, stood on a hill in Berlin’s Humboldthain park from 1930 to 1945. During the last weeks of WWII, the sculpture was destroyed. Until recently, nobody had the faintest clue where it was.

‘Berliner Unterwelten’ is the name of an association dedicated to research on underground constructions in the German capital. Its chairman Dietmar Arnold, who is also a book author, felt the urge to find the white bull. “There was no doubt in my mind about the fact that the remainder of the sculpture had to be somewhere. So, I started looking for clues”, he said. In archives, he found old photos of the object. One of them had a caption that said the bull had been destroyed and “buried at the same location”.

More research led to the conclusion that the white bull must have been buried in 1948, three years after WWII, when Humboldthain park was restructured. In February of this year, 2022, it was time for the next step. The geophysicist Gerd Plaumann looked into the situation at the location the bull used to stand at and noticed abnormalties on the ground next to it. As it turned out, Dietmar Arnold was right.

Now, it is up to the archaeologist Claudia Melisch. She and her colleagues started digging into the ground at Humboldthain. Passers-by probably thought they were looking for gold or oil when she and her team invaded the park with shovels and a small excavator. On Tuesday, they uncovered the white bull. The bad news is that the damage is more serious than anticipated.

Not only was the sculpture broken off its socket, but the bull’s head is missing ears and other parts. But at least it was rediscovered. “This find is very moving”, Claudia Melisch stated. “I am glad we managed to find the bull and to return it to the Berliners. Who would have thought that it was still there?”

The white bull weighs three tons. Before it was dug out, the district authority in Berlin ‘Mitte’ and the State Monuments Office needed to issue permissions. Now, ‘Berliner Unterwelten’ will figure out what should be done with the sculpture. The man who insisted on looking for the bull, Dietmar Arnold, wants it to remain at Humboldthain. His association intends to make sure it will not be damaged further.