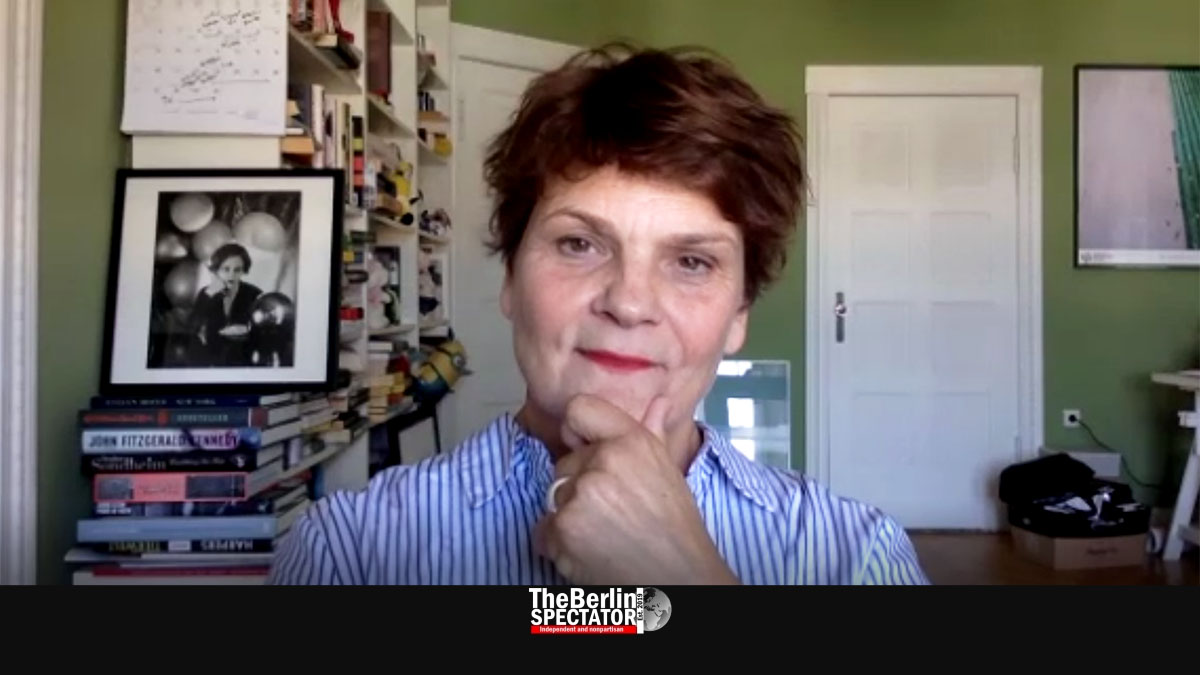 If you want to use the word ‘multi-talent’ appropriately, write about Gayle Tufts from Massachusetts. For three decades, she has been living in Berlin. She loves the city and says there was a niche for everyone. “And if you can’t find it, you can create it.”

Berlin, June 24th, 2022 (The Berlin Spectator) — When Gayle Tufts started traveling to West Germany on a regular basis in 1984, Helmut Kohl was Chancellor. Back home in America, Ronald Reagan was in office. A year after Germany’s reunification, in 1991, she moved to Berlin and got to work. Imanuel Marcus spoke to her. (The interview was shortened slightly.)

The Berlin Spectator: Since you moved to Germany, you have been active as a book author, stand-up comedian, film maker, movie actress, singer, musical performer and show presenter. What do you enjoy most?

Gayle Tufts: I would say author, performer, show presenter and singer/songwriter. These are kind of the things that I do the most. I see myself as a storyteller. My favorite thing is to be on stage and in the rehearsal room, just when we are figuring it out with my composer and my director. How do we put this together? How do we present this? That gives me great joy. But, of course I’m a “Rampensau”. I love that German word. I like to be on stage, I like the live interaction with the audience.

The Berlin Spectator: Your latest show is entitled “Wieder da”. You are touring quite a bit these days to take it to venues all over Germany. What is this latest show about?

Gayle Tufts: “Wieder da”, “We are Back”, is basically what that is saying. It means that not only Marian Lux, my stage partner, and me, but all of us are back. I don’t think we will ever get back to where we were, but we’re back here and now. I think it’s a lot about trying to somehow work through what we’ve been through. This show, every time I do it, changes because the world changes. So, I basically have to rewrite the show every time I do it. The songs remain the same, but they also get a new context. One of the cover songs I do is “Why” by Annie Lennox , from her 1992 album “Diva”. It is basically about a divorce. For me, it was a little bit about my feeling of separation from America, especially with the political cluster fuck that has been going on under the last President. So, I had to address that. “Why” is a very moving and sad song about heartache. I think we’re all going through some kind of heartache. I don’t think anyone can say “Oh, these past few years were fine.” They weren’t fine. The time now is not fine. But I think it is important for us to also appreciate what we have, here in Europe and here in Berlin.

I appreciate what I have, as a 61-year-old woman who gets to do this job and who came here on my own free will and who has been able to create a life that I really love. So, it’s about gratitude, it’s kind of about laughing and crying a little bit, about a great love song to theater. No Zoom meeting, not even me writing a book is ever gonna take the place of live performance, what I get when I am on stage, or when I am in an audience and see the people I like to watch perform. Live is it. And it’s a celebration of life.

The Berlin Spectator: You have lived in Germany since 1991. This probably means you are more German than some Germans. How German do you feel?

Gayle Tufts: It depends on what day it is. I’m going back to the States now to visit by brother and sister. They will say I’m very German. I’m sure. What does that mean? It means that, sometimes, I may think of the consequences of what I’m doing, whether I will be taking the train or a car, about the questions what is better environmentally. Can I walk there instead of taking the car, or can I go by bike? So, I look at the consequences more, maybe I’m more reflective than I used to be. Sometimes I wonder whether I came to Germany because I am kind of a reflective person and always have been, or whether I have become more reflective, but also slower. All those things I learned to do are not bad, as qualities.

The Berlin Spectator: Since you are American too, and because you have looked into this subject as an author and comedian, we need to ask you: Just how weird are we Germans? What is the weirdest aspect you have noticed since you first came here in 1984?

Gayle Tufts: That is so German! If you were in America, you would ask: “What is the thing you love?” Here, the question is: “What the fuck is that thing about Deutschland?” Well, there is a past here that needs to be accounted for constantly, from WWII. Hitler is there. He is everywhere. Basically, anything you talk about, any kind of problem, has to do with this. So, maybe you Germans are humorless. Well, maybe there is a reason for that. Sometimes I think we still live in the shadow of the Holocaust. That’s what’s weird. That’s the heavy thing. And you have to get to the heavy thing. Of course, there is a comedy circuit now that is trying to be diverse. What else is weird? All the rules and regulations. In every cliché there is a real German truth. Everything has to be a certain way, you know? This overthinking thing is where the scale tips.

The Berlin Spectator: What about these little things, including ‘Frühjahrsputz’, Quark and nude beaches?

Gayle Tufts: ‘What the fuck is Quark?’ This was part of my first show. What is Quark anyway? This is interesting. So is the abundance of sausage. There are many ways to prepare it. All of that. It’s one thing when you go to the nude beach, but Tiergarten is a park in the city. I saw all of these men there. Talk about a hotdog stand. Of course that’s the first thing you react to. Or when you go to a sauna and everyone has their clothes off. As an American you think “Oh my God, nobody has any clothes on”. But I go back now, to America, and people are in the sauna with their bathing suits. I’m like “that’s so disgusting, so unhealthy!”. I always say the Germans were proved right by just opening the windows in winter. You open up the windows, you let the air in for 10 minutes the morning, even if it’s like 15 degrees below zero, which is like minus a million degrees Fahrenheit.

The Berlin Spectator: You are from Massachusetts, and we assume you visit America frequently. As a German American, or an American German, what kind of weird aspects have you come across in your birth country? You already mentioned one.

Gayle Tufts: Exactly. When I’m in a hotel room with a window that doesn’t open, I start to flip out. And I went to a high school with 4,000 students in Brockton, Massachusetts, that had no windows that opened. Four thousand kids in the middle of puberty, with hormones and air conditioning. It was a toxic combination.
Everybody hugging you. Post Corona, people still do that. Anywhere you go, people are really happy to throw their arms around you.
On the other hand, I am happy to go back and have the people be as friendly and as welcoming as they are. It starts at the airport, where the guy who gives me back my passport says “Welcome home” and I start crying. I go to a stupid little diner somewhere in New York, and the waitress says to me: “Ready for another cup of coffee, Sweetie?”. It’s genuine. Sometimes, the Germans tend to think that we’re just superficial. No. We’re trying to get through. I’ve met some of the kindest strangers, you know? We’re never gonna see each other again, but why not make the day a little bit more pleasant for each other?

The Berlin Spectator: You have been living in Berlin, the city of cities, for 31 years. As a Berliner, what do you think makes this place this fascinating? What’s the aspect that makes almost everybody love it?

Gayle Tufts: It’s a city of absolute opposites. You got one thing, but also the other. It’s this combination of history and innovation. History is always here, which is a good thing, to be constantly up against it, whether it is the Holocaust or the Wall. On the other hand, you have all those start-ups. I’m often reminded of New York. What’s the new neighborhood? What’s the new place to go to? On the one hand there is a hipness, on the other there is something that’s very solid. Also it doesn’t close. You know you can go out on Thursday and come home on Tuesday. It’s still happening. And it’s a brilliant mix of people. Here, you can meet anybody from anywhere, including the East and the West. There is a huge influx from Eastern Europe, especially now. It’s almost getting a little too popular. Also, the combination of a huge metropolis, a huge world city, and on the other hand you can get on the ‘S-Bahn’ train and [end up] in some beautiful forest or at some beautiful lake where you can go and just calm it down. And I think there is a respect for the city, about all of its facets.
I’m so grateful to Berlin, because it gave me, with my mix of languages and genres, a place where I can present my work. I’ve been very lucky. There’s a niche. You can pretty much find your place here. And if you can’t find it, you can create it.