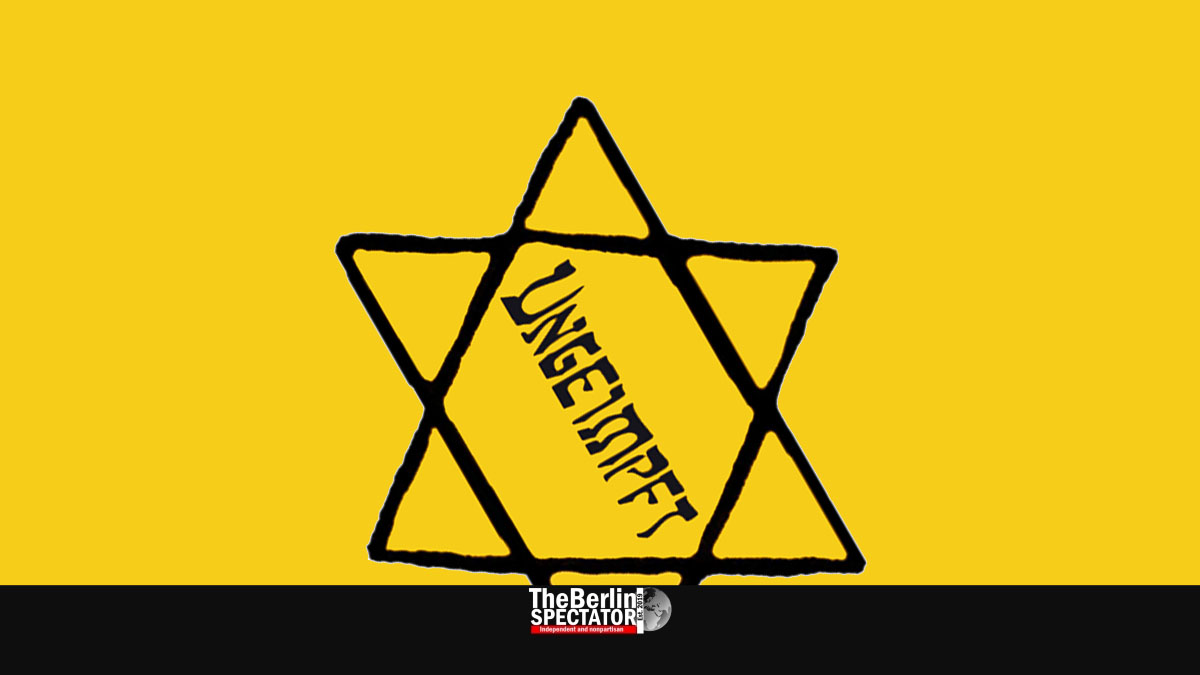 Since the Corona pandemic reached Germany, conspiracy theories have spread like the virus. Fiction about the Coronavirus was combined with antisemitism, for instance at protests, the organization RIAS says.

The idea of fighting a danger like the Coronavirus together is being lived by many. During the semi-lockdown in March, April and May, countless Germans helped the elderly, by shopping for them or by communicating via safe channels. Most Germans followed the Corona rules, and still do, because they know it is all about decreasing the danger of infection for everyone.

Myths About Origin of Corona

But there is bad news too. Tens of thousands of Germans do not believe the Coronavirus exists. Others blame a minority for the pandemic: As usual, it is “the Jews”. Blaming Jews for illnesses or viruses is not very creative or new. Hundreds of years ago, they were accused of poisoning wells. As it turns out, things have hardly changed.

The Berlin-based watchdog organization RIAS just published a study on the matter. It is entitled ‘Antisemitism in the Context of the COVID-19 Epidemic’ and its content is alarming. According to the publication, antisemitic myths about the origin and the spread of Corona appeared quickly when the measures against the virus were put in place.

Because people were confined to their homers most of the time when the contact restrictions kicked in, antisemitic statements were mainly made online and spread very rapidly, RIAS says. Behavior that offended Jews directly was reported in numerous instances. Later on in the ongoing crisis, the Jew hatred manifested itself during protests.

German Jews who were interviewed by RIAS said their impression was that the pandemic led to a reactivation of antisemitic conspiracy theories which were expressed online a lot.

Because of Corona, Jewish life in Germany mainly happened online, including prayers that would have taken place in synagogues, under normal circumstances. Within the first four weeks, RIAS documented seven cases in which Zoom online meetings conducted by Jews, including online prayers organized by Jewish congregations, were disturbed by haters who hacked their way into those online gatherings and spread their hatred towards Jews right there.

For instance, eight to ten persons entered an online evening prayer by the Jewish congregation in Leipzig, some with the username ‘Hitler’, and asked the participants whether they were Jews. The Rabbi had ended the prayer immediately and contacted the police, RIAS says in its report. Similar incidents were reported in Berlin, Düsseldorf, Frankfurt and other cities.

Between March 17th and June 17th, 2020, RIAS documented as many as 123 protests against the anti-Corona measures implemented by the German government during which antisemitic statements were made. The latter included different kinds of Jew hatred expressed on t-shirts, signs and during speeches held at those events.

More and more, an alteration of the yellow star Jews had to wear under Nazi rule, before they were arrested, deported and murdered, appeared on signs and clothing during protests staged by Corona deniers. The German word “ungeimpft”, which means “unvaccinated”, was added to those stars. This kind of self-victimization belittled the Shoah and national socialism, RIAS said in its study.

On top of it all, “Zionists”, “Rothschilds” or “Soros” were blamed for COVID-19 at the same protests. Those two names and the designation are code words for Jews that are being used a lot, among antisemites.

According to RIAS, there were regional differences. Most of the mentioned protests with antisemitic statements between mid-March and mid-June took place in Bavaria, namely 30 of them. There were 19 in Baden-Württemberg, 16 in Berlin, eleven in Saxony-Anhalt, eight in Hesse, seven in Brandenburg and more in six additional federal states within Germany.

In the past years, also before anyone had heard of Corona, antisemitism in Germany generally increased. So have crimes with an antisemitic background, including attacks and murders. Seventy-five years after Nazi Germany was defeated and Auschwitz liberated, antisemitism has three main sources, namely the far right, the far left and Islamists.

In Potsdam, the capital of Brandenburg province, federal state’s Interior Minister Michael Stübgen and Jörg Müller, the Director of Brandenburg’s Office for the Protection of the Constitution introduced this authority’s annual report on Tuesday. It says the number of right-wing extremists in the state has increased substantially.

There were almost 2,800 of them, the report says. Some of them are suspected right-wing radicals, while others definitely fit that category. It is the highest number of right-wing extremists Brandenburg has had since its foundation 30 years ago. Only two years ago, there were 1,675 radicals of this kind.

Minister Stübgen said, half of all right-wing radicals in Brandenburg were prepared to use violence. To the authorities, the situation was a challenge. Parts of the extremist party AfD, about 800 of its members in Brandenburg, were included in the report’s part about right-wing extremists.