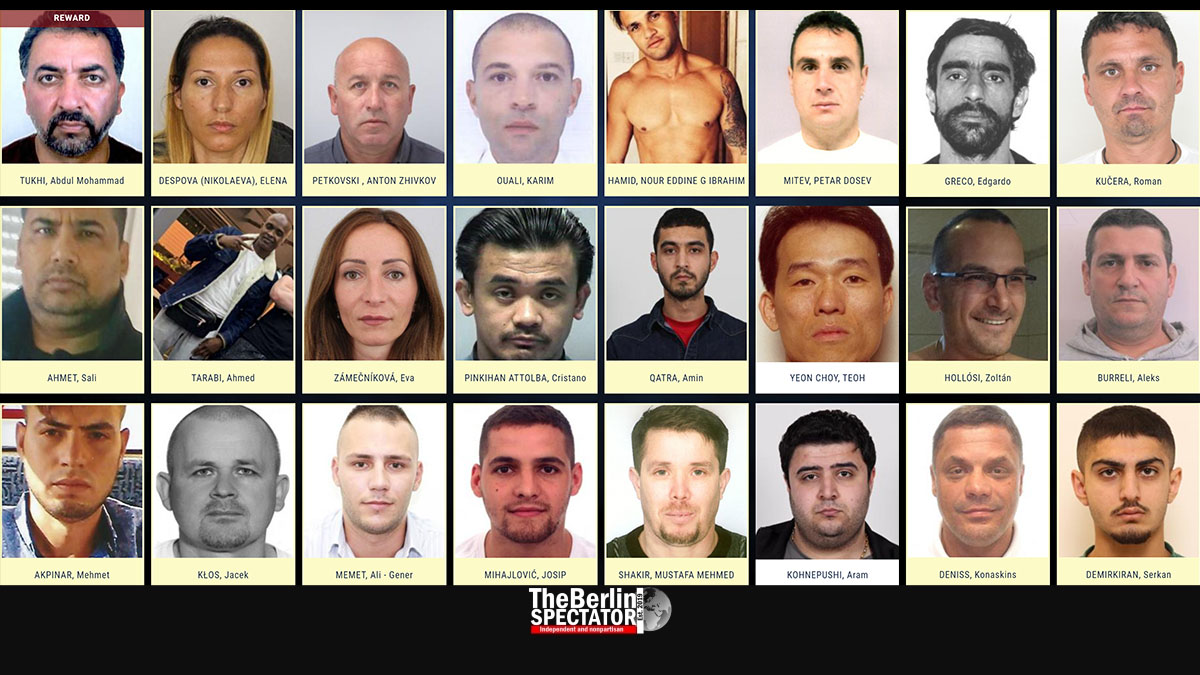 Europol has a list of the most wanted criminals, just like the American F.B.I.. This good idea was adopted only six years ago, and it has already led to some successes. Apparently, there is no equality among most wanted fugitives. Only three of the 63 ‘candidates’ are women.

Berlin, January 19th, 2022. Update: 4:22 p.m. CET (The Berlin Spectator) — Europe has learned from the United States. None other than J. Edgar Hoover discussed the idea of a list of the most wanted criminals with a journalist in 1949. Soon, it became clear that American newspaper readers were lusting for true crime stories, including reports about investigations and especially about suspects.

The Federal Bureau of Investigation, also known as the F.B.I., knew what it did when it released its first list of the ten most wanted fugitives on March 14, 1950. It worked. With that list, the Bureau could put some of the most wanted behind bars quickly.

It would take decades, until something called the Internet came along. Now, absolutely everyone had the opportunity to check the “F.B.I. Ten Most Wanted List”. This lead to even more arrests. Recently, the F.B.I.’s list received a relaunch, an oil change, new brake pads and additions. Apart from the 10 most wanted individuals, the Americans are now listing wanted terrorists, kidnappers and bank robbers separately. Missing person cases are also part of their secondary lists.

In Europe, things took a little longer. Only 66 years later, in early 2016, Hoover’s idea was borrowed. Europol now has a list of dozens of men, and some women, who are being sought. Of course this is about more than just stealing a pack of chewing gums at the local supermarket. Europe’s Most Wanted Fugitives list is something like the phone book of dangerous criminals. The individuals listed are being accused of human trafficking, armed robbery, large-scale fraud and murder.

Looking at the 59 men and three women on today’s version of the list leads to the insight that women can be bad criminals as well, but they obviously are a tiny minority. One of the wanted ladies is a Colombian citizen who allegedly abused and exploited young women in Spain. They worked in her apartment as prostitutes. She also sold cocaine. A Bulgarian woman who is on the list allegedly forced her victims into prostitution and laundered money. The third female entry on the list, a Slovak national, was convicted of attempted murder, but disappeared into thin air.

But hunting the criminals and suspects on the list is only a small part of what Europol does. On a regular basis, they take down organized crime rings which sell drugs or illegal streaming services, while effectively fighting human trafficking. Europol keeps on staging very useful operations. Earlier this week, the authority coordinated an operation that involved the police from the United States of America, Canada, the United Kingdom, Germany, Czechia, France, Hungary, Latvia, the Netherlands and Ukraine.

This was about taking down VPNlab.net, a service which enabled criminals to spread ransomware bugs and launch other kinds of cybercrimes. The fifteen servers VPNlab.net was using were seized when the whole endeavor was put out of business. The Central Criminal Office at the Hanover Police Department in Germany led this operation. Today, Europol headed an operation against an organized crime group that was involved in migrant smuggling. Not anymore. The police in Albania, Greece and Italy searched 28 objects and arrested 29 individuals on Wednesday.

Europol’s Most Wanted Fugitives list can be accessed here.

Note: An earlier version of this feature was published in early 2019, just after The Berlin Spectator was launched.