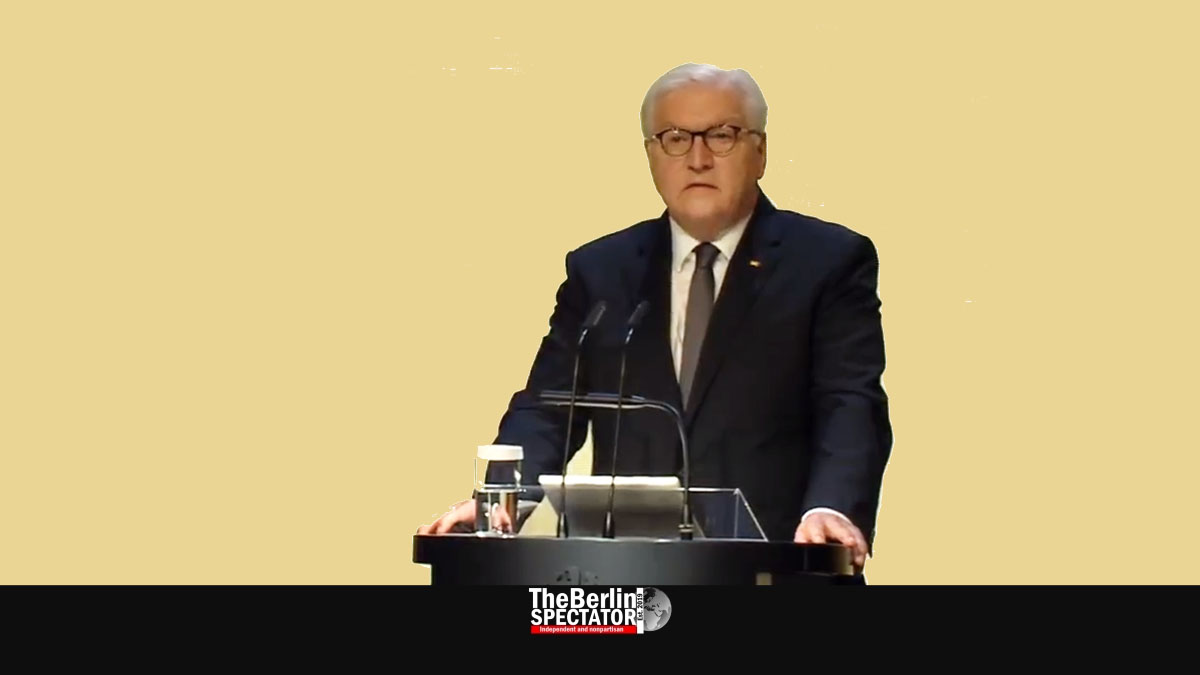 In Berlin, President Frank Walter Steinmeier held a speech at a commemoration event for almost 80,000 people who have died of COVID-19 in Germany alone. The next of kin of some Corona victims spoke about the loved ones they lost, in place of tens of thousands of others.

Berlin, April 18th, 2021 (The Berlin Spectator) — Choirs and instrumentalists created the right atmosphere at Berlin’s ‘Konzerthaus’ at Gendarmenmarkt Square with the classical music they played. Because of the Corona restrictions, only few people were part of the commemoration event on site, but it was televised. Chancellor Angela Merkel, Wolfgang Schäuble, the President of the Bundestag, family members of Corona victims and others participated in the event President Frank Walter Steinmeier had suggested a few weeks ago.

“More than a year ago, the pandemic descended on us, on our country, on the entire world”, he stated. “We are weary of the pandemic”, he said. “We need a moment to pause and to look at the human tragedy” the Corona crisis had brought along. Steinmeier said it was time to commemorate those who had died “a lonely and often torturous death in these dark times.” The President also mentioned those who died of other diseases without their families around them, because of the Corona restrictions that included bans on visitors in virtually all hospitals in the country.

“We are often not aware of the fact that there are fates behind those numbers. A society that suppresses all of this sorrow will suffer damage”, Steinmeier stated at the central commemoration event. The victims were now missing in families, among friends, in the neighborhood. They would not come back. “We remember their names, faces and stories. We commemorate all victims from all over the world. Mourning them connects us across borders”, President Steinmeier said.

“We should not forget under what conditions people died.” Many had not been allowed to welcome visitors. “We think of those who had to die without a word, without a soft glance or a touch. This makes us very sad.” Frank Walter Steinmeier said the country also remembered those who were caring for dying patients at hospitals, care homes or hospices. “We are thankful for their benevolence.” Many had gotten infected themselves while helping others, and some of them had died as well.

“Today we want to offer our condolences to those who are mourning loved ones, and tell them they are not alone”, Steinmeier stated in Berlin. “The virus has hit and wounded us more deeply than we acknowledge to ourselves. We also think of those who are suffering from after-effects of their infections.” He also mentioned young people whose start into their independent lives had been affected by Corona.

“The pandemic also shows us our vulnerability and mortality. This experience can be a humiliation, but it can also be healthful”, the President said. “Because now we are asking ourselves what is really important in life.” He stated people had been there for each other from day one of the Corona pandemic. “This human sympathy is a beacon of light in dark times.”

After President Steinmeier, people who lost loved ones commemorated them at the event. They included two daughters who lost their fathers, a woman who lost her husband and a man who lost his mother. In place of thousands of mourning people in Germany and in the world, they gave their Corona victims a face. Later, photos of more victims were shown, while an orchestra played classical music.