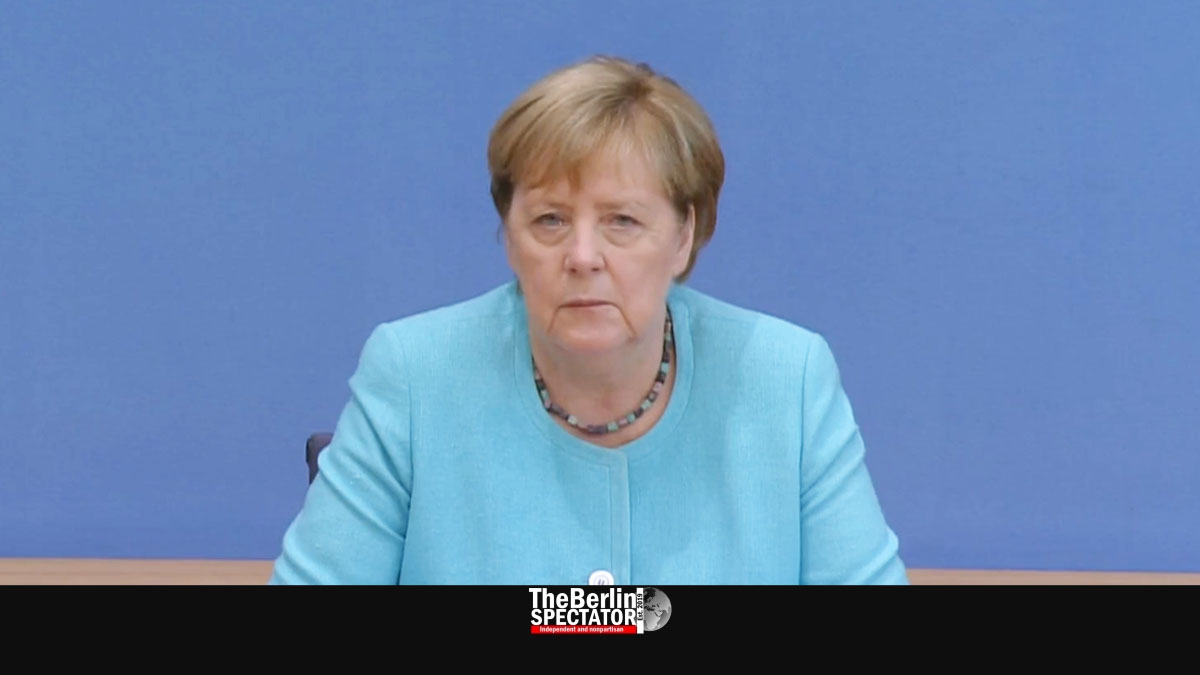 For the last time, Angela Merkel gave her traditional “summer press conference” in Berlin. She said the Coronavirus had reached an “alarming momentum” in Germany.

Berlin, July 23rd, 2021 (The Berlin Spectator) — Sixty-five days ahead of the big elections that will end her last term, the 67-year-old Chancellor Angela Merkel came to the Federal Press Conference in Berlin to talk about all kinds of subjects, including the sixteen years she was in office and the five big crises she had to deal with. Here, she included the financial crisis of 2008, the salvation of the Euro, the refugee crisis of 2015, as well as the ongoing climate change and the Corona crisis which the world is still dealing with as well.

She said the events throughout her term had shown that Germany could not cope with big challenges on its own, but only in cooperation with the world. Mrs. Merkel named two examples: “Alone, we will not be able to change the climate. Alone, we will not be able to fight the pandemic.” But the way we do it can be an example to others who might follow Germany’s approach, she said.

The Chancellor conceded she had not had the time to think about what she would do after her 16-year term in office. She stated the number of tasks she would have to deal with in the remaining weeks was “enormous”. But she also said she was enjoying her work. Her intention was to prepare for a proper handover to the next government. Her party colleague Armin Laschet has the best chances to succeed her.

In regard to the increasing number of Corona infections in Germany, Angela Merkel said there was an “alarming momentum”. She called for more vaccinations. “The more people are vaccinated, the freer we will be”, she stated. The pandemic could only be overcome if people worked on this challenge together. Following the Corona rules was still existential, including wearing masks, keeping one’s distance, airing rooms and getting tested. The Chancellor said the fact that the German Corona infection numbers were doubling every 12 days was alarming.

An overburdening of Germany’s health system needed to be avoided, Angela Merkel stressed. This was still the main guideline for her government. The subject would likely come up at her next conference with the Federal Ministers from Germany’s sixteen states. At the latter meeting, emergency aid for the people affected by last week’s floods was going to be the main point on the agenda.

Angela Merkel also mentioned those floods and the fact that Germany is now mourning 170 victims. The devastation caused by the recent weather catastrophe was horrible. She said the federal government was providing 200 million Euro (235 million U.S. Dollars or 171 million Pounds Sterling). An emergency aid fund was supposed to be set up with the federal states, she stated.