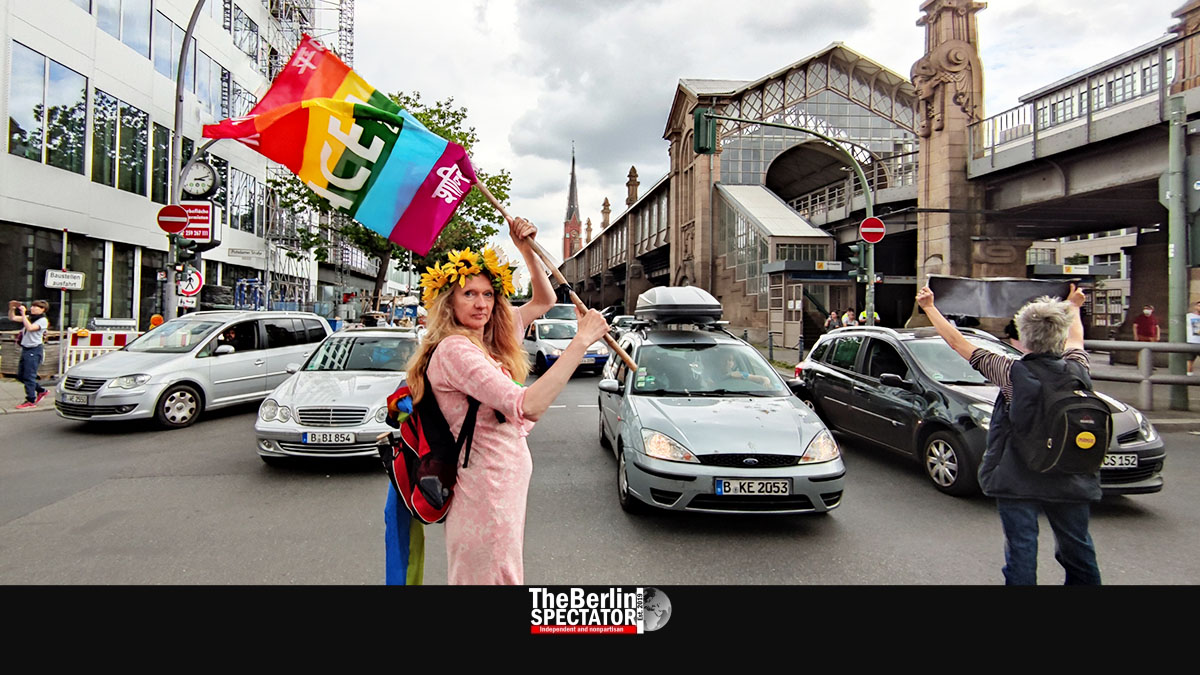 In Berlin, thousands of Corona deniers staged a protest on Sunday, even though it was banned. In some areas, the police did not have the situation under control. They had to use force on more than one occasion. One protester died on Sunday, possibly of a heart attack.

Berlin, August 1st, 2021. Update: August 3rd, 2021, 6:15 a.m. CEDT (The Berlin Spectator) —  Thousands of Corona deniers staged a protest in Berlin on Sunday, in spite of the fact that the authorities had banned it. Members of the movement ‘Querdenken’ and other conspiracy theorists took to the streets in Berlin’s western city center. For the most part, the police did not control the situation.

Escalation on the Streets

On Saturday, they successfully prevented prohibited protests from taking place. But on Sunday, the situation escalated quickly when a growing crowd started demonstrating. In the early afternoon, the Berlin Police Department said a group of protesters had harassed and attacked officers at Länderalle, a street in the German capital’s Charlottenburg borough. The attackers had tried to break through a police barrier and pull officers out of a formation. As a result, pepper spray and clubs were used against them.

According to the Berlin Police Department, as many as 950 protesters were arrested. When others tried to free some of them them, police needed to use spray again. At the Victory Column, they threatened the use of water cannons when hundreds of protesters there refused to follow the order to leave the location. After 5:00 p.m., the illegal rally was still going on. The authorities have the right to inflict fines of up to 1,000 Euro (1,187 U.S. Dollars or 853 Pounds Sterling) per person.

One protester died on Sunday, according to a statement the Police Department sent out on Monday morning. When officers wanted to check his documents, he said he was not well. An ambulance was called. At the hospital he was taken to, he could not be saved.

In front of the protest march, Jörg Reichel, the head of the German Journalist Union in Berlin, was pulled from his bicycle by protesters who beat and kicked him. He was taken to a hospital after passers-by saved him from the attackers.

For hours, the protesters marched back and forth in the streets of Berlin. At some point, they reached Kurfürstenstrasse and Potsdamer Strasse in the ‘Nollendorf Kiez’ neighborhood. Nobody seemed to know where the protest march was supposed to go. It moved in circles and reached the same spots up to three times. No police officers were there to block streets to motorized traffic. This aspect lead to dangerous situations at the intersection of Bülowstrasse and Potsdamer Strasse, where impatient motorists almost hit protesters who stood in their way.

The conspiracy theorists protested against the government’s Corona policies which are designed to curb the virus as much as possible, and against the Corona restrictions, even though hardly any of them are left by now. They kept on chanting “Peace, freedom, democracy!” in spite of the fact that Germany has all of that. A total of 2,250 police officers were on duty to deal with the situation, without success. From a helicopter, the police observed the situation. But this did not help them to stop the illegal rally either.

No Distance, No Masks

None of the participants kept their distance, and nobody wore masks. This problem had been foreseen. It is the main reason why the protest was banned, along with 12 similar rallies that had been registered for this weekend. In the past months, Corona deniers and extremist right-wingers they protested with had broken through police barriers more than once. Once, they almost stormed the Reichstag. Hardly ever did they adhere to orders given to them by the police. Some 5,000 protests take place in Berlin every year. Only very few registered rallies are banned.

Still, three more protests against Germany’s Corona policies registered for Monday were banned as well, according to a spokesperson for the Berlin Police Department.

The Berlin Perspective: ‘Let’s Cut Each Other Off on Karl Marx Strasse’