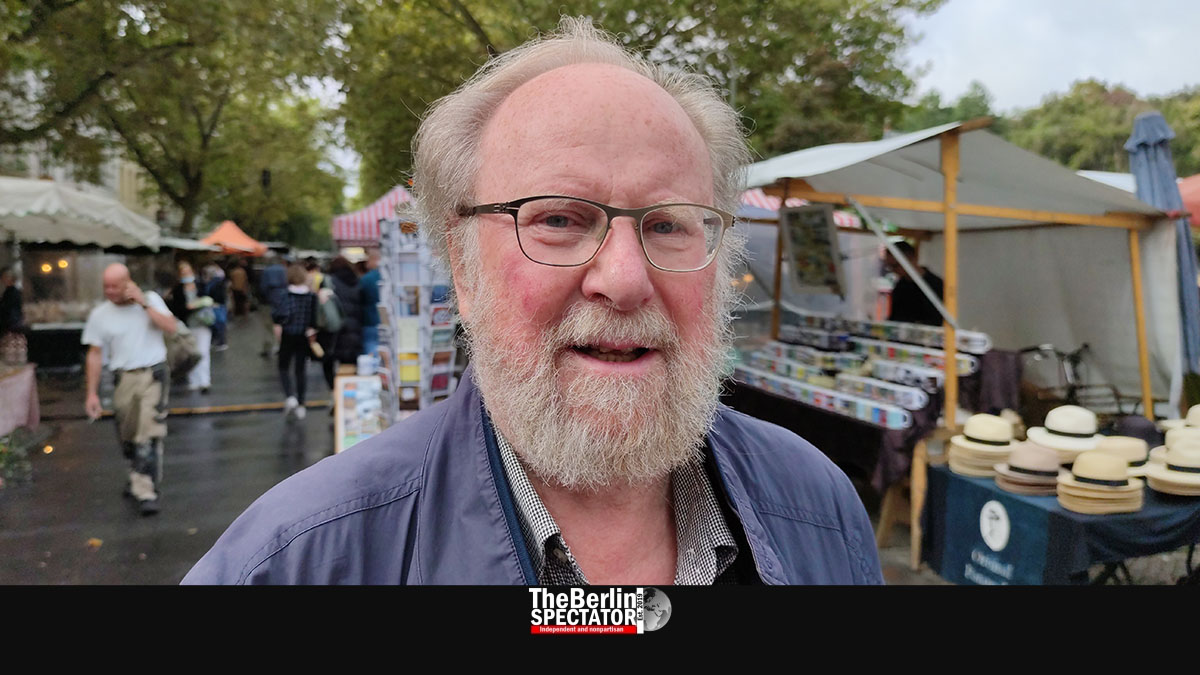 Now that the big elections for the Berlin Bundestag are only days away, Germany’s major parties are trying everything to get the attention of undecided voters. They are staging campaign events with big names.

Sofia/Bulgaria, September 22nd, 2021 (The Berlin Spectator) — At the weekly market at Berlin’s Kollwitzplatz, a square in the posh Prenzlauer Berg neighborhood, one face stuck out the other day. Wolfgang Thierse, a former President of the Bundestag and one of the most prominent Social Democrats, stood there at a stand his party colleagues had set up. He distributed flyers, discussed things with people and shot selfies with some of them. Thierse was only one of many stars of German politics who hit the campaign trail ahead of Super Sunday.

Further west, in North Rhine-Westphalia, the departing Chancellor of the Federal Republic, Angela Merkel, was going to help her conservative Christian-Democratic Party’s candidate Armin Laschet in his home city of Aachen. He needs all the support he can get, since he has been trailing behind in the polls for weeks. On Tuesday, Mrs. Merkel and Laschet, the man she wants to make her successor, took part in an election campaign event in Stralsund, which is her election district. She is now passing it on to a much younger party member.

Early this morning, Angela Merkel’s cabinet was scheduled to convene for the last time in this legislative period. But the grand coalition, consisting of the center-right CDU and the center-left SPD will be responsible for all government affairs until the new government stands, meaning it will remain in office for now. It might take some time, possibly even months. A coalition needs to be formed first. Once this process is completed, a new Chancellor will be elected by the new Bundestag.

The Green candidate for Chancellor, Annalena Baerbock, was on the campaign trail in Stuttgart on Tuesday. If the polls prove to be at least sort of accurate, she will not head the next government. But Olaf Scholz of the SPD might. He was campaigning as if there was no tomorrow. His party is sending him to every corner of the country these days. Does Scholz ever sleep? Hopefully yes, but probably not that much.

About one in four potential voters has not decided which party to go for. These are the people Laschet, Scholz and Baerbock are after with the message they are spreading until the last moment. Smaller parties in Germany, including the center-right, pro-business FDP, the far-left ‘Die Linke’ and the extremist right-wing AfD are on the campaign trail as well.

The latest polls still give the SPD the edge. In the last elections for the Bundestag, in 2017, the Social Democrats got only 20.5 percent. This time, they might reach 25. Armin Laschet’s CDU and its Bavarian version CSU will likely lose substantially. Last time, they won in a landslide, with 32.9 percent. This time, they might loose one in three voters. A catastrophic result of 22 percent is what pollsters predict.

One party might double the support it got last time, namely the Greens, who could end up with about 17 percent. The FDP and the AfD will end up with 11 percent each if the latest polls prove to be accurate, and ‘Die Linke’ stands at 6 percent. According to these polls, a number of government coalitions might be mathematically possible. If the results for SPD and CDU increase a little, they could actually be able to form a new grand coalition. But they would probably have to change roles, meaning the SPD would likely become the senior partner this time.