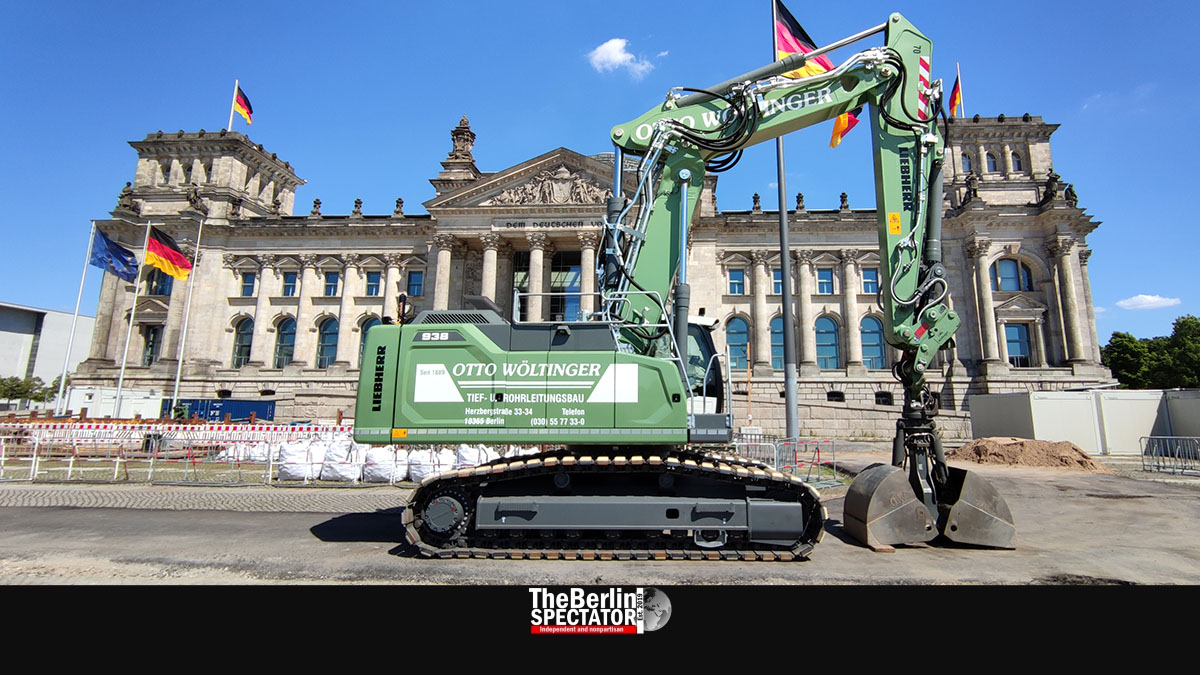 Yes, it rained a few times. But, all in all, this was (and still is) a mostly sunny weekend in Berlin. The capital’s residents and guests engaged in lots of activities. Our reporter was on the move on his bicycle.

Berlin, June 12th, 2022 (The Berlin Spectator) — What a weekend! Yes, some rain was pouring down from the sky on Sunday morning, but by 9:00 a.m. it was supposed to be gone and give the Sun the opportunity to dominate Berlin for the rest of the day. On Friday and Saturday, our reporter did some cycling, as usual. This is what he ran into.

When our skin is exposed to sunlight, it makes vitamin D from cholesterol, according to healthline.com. This works anywhere, including on Museum Island. On Friday, some Berliners chose to refrain from walking to the next park. Instead, they insisted on feeling the warmth our solar system’s star delivers right there, in front of the Old National Gallery. Obviously, they could not have picked a nicer spot.

These two Polish gentlemen (see photo above) cycled all the way to Berlin from their home town in Poland. They said it had been a 600 kilometer (373 miles) trip. When our reporter met them at Brandenburg Gate, they were getting ready to cycle back home. Bon voyage!

According to websites that deal with earthquakes, a short tremor with a magnitude of 1.4 on the Richter scale was registered in Berlin’s Tempelhof borough on Friday night. It looks like the tiny earthquake was caused by the Tempelhof Sounds festival, the noise of which was even heard two miles away, in the Neukölln neighborhood, in which people were trying to enjoy a quiet weekend.

Hundreds of mostly young Berliners and visitors walked towards the festival ground on Saturday in the early afternoon. I probably increased the average age substantially when I took photos there. After listening to a band the guitarist of which knew how to play as many as four chords, I had enough and made sure I got out of there as quickly as I could.

I took refuge at a far more quiet place without aggressive “music”, namely the flea market at Marheineke Platz, a square in Berlin’s Kreuzberg borough, located at the eastern end of Bergmannstrasse, a famous street known for its many restaurants. This event takes place on Saturdays (10:00 a.m. to 4:00 p.m.) and Sundays (11:00 a.m. to 5:00 p.m.). Apart from neat chairs and tables, they sell absolutely everything, including old Teddy Pendergrass records, Matchbox toy cars and useless junk. The atmosphere is great.

Here and all over Berlin, lots of tourists with strong Bavarian and Swabian accents were heard and seen. There was a sense of normality in the city this weekend. Being there almost felt like nothing had happened in the past months. But several smaller protests against Moscow’s war of aggression in Ukraine did take place.

The many tourists in front of the Reichstag building (see main photo at top of page) did not expect to see what they found there: Excavators spoiled the selfies they were going to take. The reason they are there is the construction of a new visitor center. Tourists who want to enter the dome on top of the Reichstag, for a special view of Berlin, are supposed be routed to the Reichstag through a tunnel they are digging out right now. Those containers that serve as a visitor center right now will disappear once the new building is inaugurated. But first, it will have to be built.