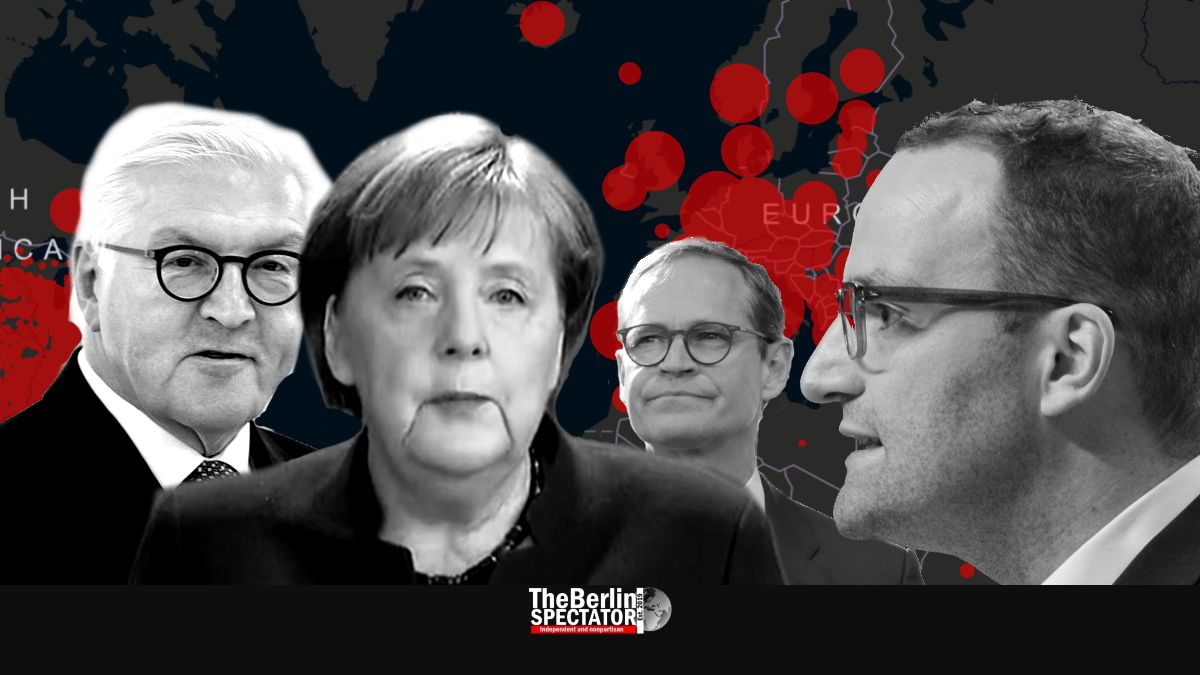 In Germany the number of deaths caused by COVID-19 has increased by two thirds within 48 hours. The country’s Chancellor said it was too early for discussions about lifting the ‘contact ban’.

After a six-hour video conference with her G20 colleagues, Chancellor Angela Merkel recorded a voice message in which she asked Germany for patience. It was too early for a debate about an easing of the ‘contact ban’, a measure that largely confines people to their homes.

Only hours before, Merkel’s own Chancellery Minister Helge Braun had jumped into the discussion his boss wants to avoid at this stage, by saying young Germans could be allowed to go back on the streets first, once the measures would be lifted.

Merkel, who had to go into quarantine in her home herself after an infected doctor vaccinated her, said she did miss personal contacts, for instance to the members of her cabinet. But she was “very well engaged”, the head of government stated, also because she was spending a lot of time in video conferences.

During the video conference, it had indeed been possible to work on controversial texts, but this task had required a lot of discipline and raising one’s hand, Merkel said. While she insists the European Stability Mechanism (ESM) was the main instrument for helping other European countries cope with the Corona crisis, other voices wanted to go one step further, with “Corona bonds”.

On Thursday, President Frank-Walter Steinmeier had made his first statement on the Coronavirus crisis. He said it was difficult to “keep a distance from people we love and places that are important to us.” But only this approach “helps us not to lose what we love.”

‘Calm Before the Storm’

Berlin’s Governing Mayor Michael Müller announced Berlin would accept five Coronavirus patients from Italy. “We will fight for every life!”, he vowed. In this crisis, Berliners were not separated by a physical wall, but by an invisible one. Berlin had always withstood its crises, Müller said.

According Germany’s Health Minister Jens Spahn, this is “the calm before the storm.” So far, the numbers were not encouraging, he said. “But there will be a time after Corona, during which we will still fight the virus while life normalizes”, Spahn stated.

Half way around, the world, a Boeing 747-8i with the Lufthansa livery stood at Lima Airport in Peru on Thursday. The aircraft was sent to pick up German tourists who had been stranded there since the Corona crisis escalated. This flight is part of Foreign Minister Heiko Maas’ giant pickup endeavor for tourists who could not have returned to Germany otherwise, because of cancelled flights, closed airports or closed borders.

In Lima, 27 Israeli tourists in the same situation joined the Germans on the giant Lufthansa plane chartered by the Federal Republic of Germany. The Israeli Ambassador to Germany Jeremy Issacharoff, who recently got infected with the Coronavirus during a meeting, thanked Germany.

From Lima to Tel Aviv

“In these crisis-ridden days, Israeli-German relations have proven to be very resilient for the benefit of the citizens on both sides”, Issacharoff said. “Cooperation through contacts at all levels has shown the depth of this strategic partnership and enabled many Israelis to return home. We are very grateful.” The pickup flight landed in Frankfurt early this morning, where the Israelis will be picked up and flown to Ben Gurion Airport.

For the pickup operation, the federal government in Berlin had allocated 50 million Euro (56 million U.S. Dollars or 45 million Pounds Sterling). So far, 150,000 stranded tourists were picked up. Some 50,000 are still waiting in all parts of the world.

On Friday morning, Germany had 43,211 Coronavirus cases, before the first updates came in from the federal states. One fourth of all infected persons, close to 11,000 of them, were reported in North Rhine-Westphalia. Bavaria and Baden-Württemberg stood at more than 8,000 each early this morning, Lower Saxony and Hesse had more than 2,000 cases each and Berlin was about to hit the 2,000 mark.

Mark Worth: Germany Loves Whistleblowers – Unless They are German