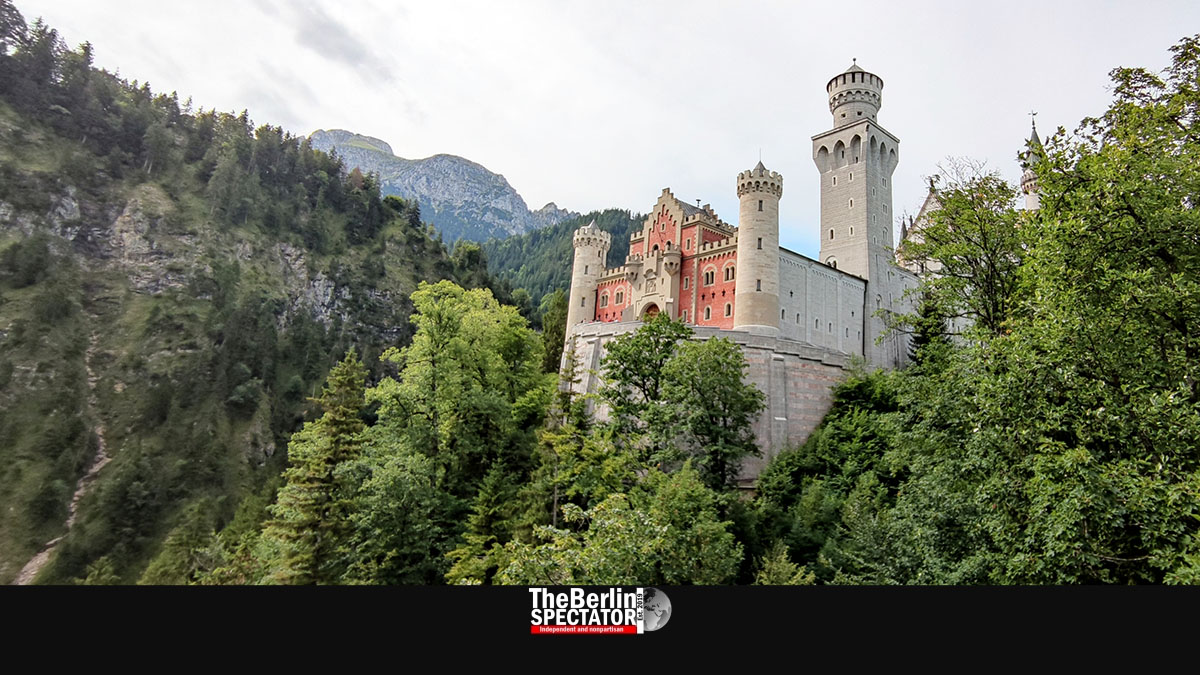 Germany has many sightseeing spots, including the Black Forest, wine regions, rivers, historic sites and buildings of all kinds. There are quite a few palaces and castles too. None of them is quite like Neuschwanstein.

Grossgmain/Neuschwanstein, August 12th, 2021 (The Berlin Spectator) — A big tourist magnet needs to be organized well. When it is as beautiful as Neuschwanstein Castle, it will not only mesmerize countless people, but also create a whole lot of income. They did what they could to control those crowds of tourists. As many as 1.5 million of them go to see one of Germany’s most important sightseeing spots every year. In the Corona pandemic, the numbers decreased temporarily. During the summer vacations of 2021, things were as normal as they could be.

Discovery on the Hill

Three roads lead to Neuschwanstein Castle and neighboring Hohenschwangau Castle, one from Munich, one from Schwangau and one from Füssen, yet another one of Bavaria’s many tourist destinations. All buses and cars that arrive are being channeled to three parking lots all of which charge fees. From there, the crowds need to walk by an information center located next to the bus stop, with bathrooms which also charge fees. Tourists who walk up the main road will hit the most important building of them all, namely the ticket center.

In August of 2021, time slot tickets were offered, but sold out weeks ahead. Tickets are needed to enter Neuschwanstein Castle, but not to look at it from outside. Up to 10,000 visitors per day, with and without tickets, walk up the mountain one of the most famous palaces in the world is located on. Those who are willing to pay for a ride on a horse-drawn carriage can bypass the walk. A lady in a Land Rover Discovery drives up and down the road on a regular basis and removes the droppings those beautiful horses leave behind. Her job title is not known.

Once the tourists close in on the most beautiful castle in the Federal Republic of Germany after 20 to 40 minutes of walking uphill, depending on the speed, they will see what they came here for. There is no better object for postcard photographs. Neuschwanstein beats them all. The ‘Marienbrücke’ further up the mountain, the place with the best view, was closed due to renovation work. But the tourist magnet can be photographed from all sides at several spots along the way.

Neuschwanstein’s owner, namely the federal state of Bavaria, does a good job keeping things neat. Millions are being invested on a regular basis, but the income is a lot higher than the costs. Besides, the castle attracts many tourists to the entire region. There are two problems though: Corona, which nobody can do anything about, and traffic. Residents in a wide radius around Neuschwanstein are annoyed, especially in summer, when thousands of vehicles with tourists cause pretty bad traffic jams.

Ludwig II of Bavaria wanted a castle which would be “more beautiful and more cozy than Hohenschwangau Castle, by any measure”. This was exactly what he got, but he did not live to see its completion. Work on Neuschwanstein Castle commenced in 1869. It took until 1892 until the last part, the bower, was finally done. A wonderful fairytale castle is what Neuschwanstein became, one with more than 200 rooms and halls, only 15 of which were used when Ludwig II of Bavaria was still alive.

Today, Neuschwanstein Castle, located south-west of Munich at the Austrian border, is the place of places, the spot every good tourist should walk up to at least once. Just make sure you remember where you parked your vehicle.