Berlin: Some Incidents Registered at May 1st Protests, Antisemites Rally in Spite of Ban 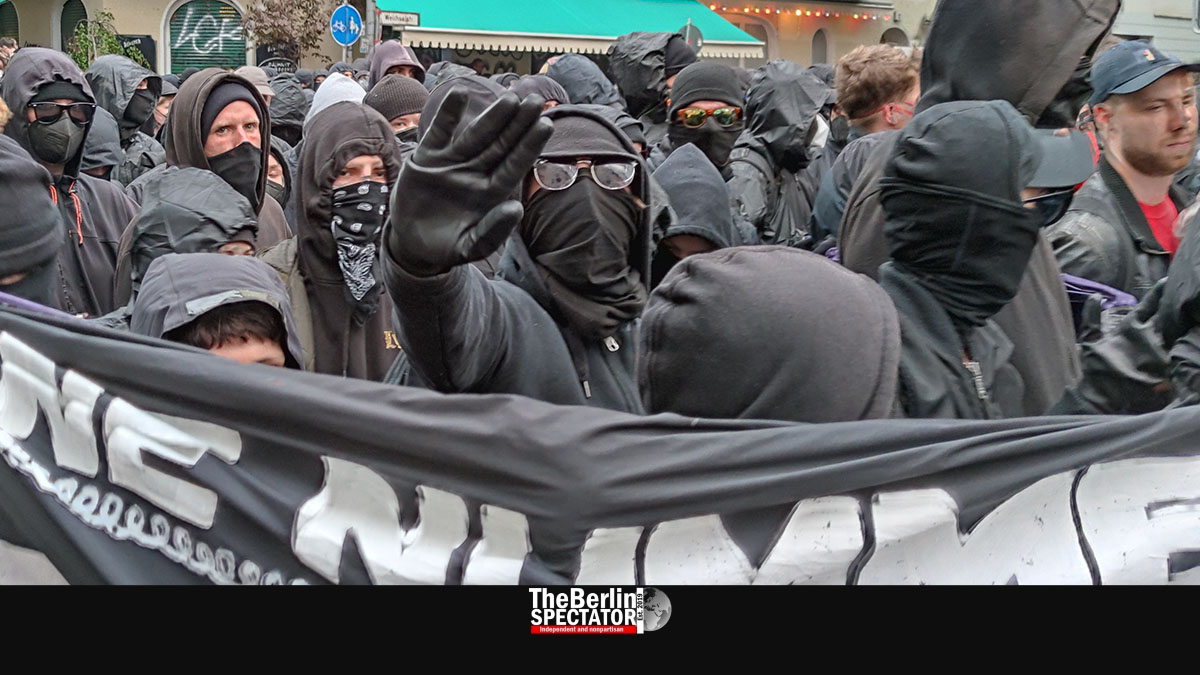 In Berlin, this year’s May 1st protests were comparatively quiet, a police spokeslady told The Berlin Spectator. But the Governing Mayor was pelted with eggs, and many participants of a big rally chanted antisemitic slogans. Police officers were attacked in some cases.

Berlin, May 2nd, 2022. Update: 2:17 p.m. (The Berlin Spectator) — At 10:00 a.m., the official Labor Day protest commenced. Thousands took part in the rally which ended at Brandenburg Gate. Reiner Hoffmann, the chairman of the DGB, an organization that represents all German unions, said the war in Ukraine could serve as a pretext to arm the military indefinitely. He stated the funds used for weapons were needed for future investments for the welfare state.

At Brandenburg Gate, Berlin’s Governing Mayor Franziska Giffey aborted her speech when she was booed and protesters threw eggs at her. So, even the traditional rally was not entirely peaceful. It was one of a total of 19 demonstrations that took place in Berlin on Sunday. A police spokesperson told The Berlin Spectator’s reporter almost 6,000 officers had been on duty today. Two thousand of them had come from nine other federal states, namely Baden-Württemberg, Bavaria, neighboring Brandenburg, Lower Saxony, Mecklenburg-Hither Pomerania, North Rhine-Westphalia, Rhineland-Palatinate, Saxony-Anhalt and Schleswig-Holstein. The Federal Police helped the Berlin Police Department as well.

Especially the ‘Revolutionary May 1st’ protest had worried Berlin’s authorities. At least 14,000 people took part, including extremist left-wingers. The march from Hertzbergplatz in Berlin’s Neukölln district to Oranienplatz in Kreuzberg was stopped by the police a few times. First, some participants were ordered to remove their banners because of illegal content. Then, one person was pulled out of the crowd because of aggressive behavior. His ID was checked before he was released. On Monday afternoon, the Police Department stated there had been 63 arrests, while 37 persons remained in police custody. A total of 123 legal proceedings were initiated against protesters. Twenty-six officers were injured on Sunday.

Palestinian pro-terror groups took part in the ‘Revolutionary May 1st’, including ‘Palestine Speaks’ and ‘Samidoun’, an ‘NGO’ that is affiliated with the terror organization PFLP. Its members chanted antisemitic slogans including “From the river to the sea, Palestine will be free”. By this, they do not mean to say Gaza should be freed from the terror organization Hamas which rules it. Instead, they are calling for an elimination of the only predominantly Jewish state in the world, which also is the only democracy in the Middle East.

The police had banned antisemitic protests until Sunday, after two of them had caused outrage a week ago. Still, the antisemites did join Sunday’s large protest. Another worrisome aspect is the fact that the other participants did not seem to mind. The rally also included a ‘black bloc’ of modern day revolutionaries who use the right to protest the system gives them in order to protest against the system. Many of them hid their faces at this public event they were part of.

Once the ‘Revolutionary May 1st’ reached Kottbusser Tor in the Kreuzberg borough, the protesters provoked the police, as usual. “All of Berlin hates the police”, they chanted. This statement is not true, but it obviously sounds good to left-wing radicals. In those chants, they also called cops “pigs” who needed to “get out of the neighborhoods”.

The officers they were trying to provoke protected Berlin on Sunday. They tried to keep a low profile as long as the demonstration was peaceful, but hundreds of officers did accompany the ‘black block’ and other groups that were part of the biggest rally. Most of the people who were part of the ‘Revolutionary May 1st’ march were peaceful. But in the late evening, the police were attacked when protesters threw bottles and lit pyrotechnical products at them. One trash can and a car were set on fire. At 10:00 p.m., the organizers officially ended the rally at Oranienplatz square. According to the Berlin Police Department, this was “the most peaceful May 1st in decades”.

Several street fairs took place on Labor Day as well. Hermannplatz square was one of those locations. It was blocked to motorized traffic. On the big intersection of Urbanstrasse, Sonnenallee and Kottbusser Damm, a good Soul and Rock band played for a dancing crowd. Motorists needed a lot of patience, since many streets were off limits for them. In Kreuzberg, there were pretty bad traffic jams. In some cases, people had to wait for hours until they could finally drive home.

There were May 1st demonstrations in other cities too. In Düsseldorf, Chancellor Olaf Scholz spoke at the main union rally. He rejected demands for an end to weapons exports to Ukraine by saying the notion they could defend themselves against the Russian attack without weapons sounded cynical to Ukrainians. At the rally Scholz spoke at some protesters called for “peace without weapons”. On Friday, several prominent Germans had signed an open letter to Olaf Scholz in which they told him not to send more heavy weapons to Ukraine because this approach could motivate Russia’s President Vladimir Putin to extend the war into NATO territory.

In Berlin, several cars were set on fire on Sunday night. It is unclear whether there is a connection between any of the Labor Day protests and those crimes.

Franziska Giffey on May 1st: ‘We Are Firmly Opposed to Violence and Hatred’