Franziska Giffey on May 1st: ‘We Are Firmly Opposed to Violence and Hatred’ 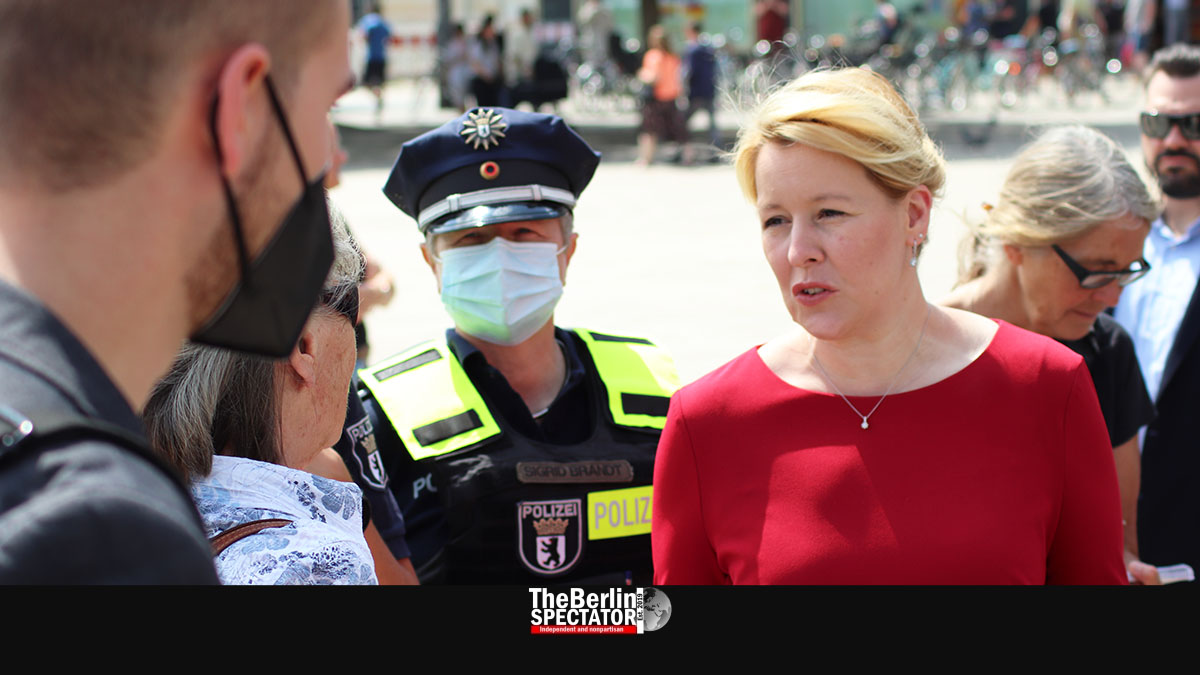 This is Labor Day. Most Berliners hope there will not be big incidents involving violence on the part of radical protesters. Governing Mayor Franziska Giffey called on people to be peaceful and responsible. Not everyone will.

Berlin, May 1st, 2022 (The Berlin Spectator) — “It is an encouraging sign that employees and union members can take to the streets again on this year’s Labor Day”, Berlin’s Governing Mayor Franziska Giffey said. In the past two years, Corona had hit the working world hard, she added. Thanks to those who had worked during the crisis, Berlin had come through it well. Good work needed recognition and fair pay above all, the Mayor stated. That was why strong unions were needed. Mrs. Giffey mentioned Berlin’s new minimum wage, which is 13 Euro (13.70 U.S. Dollars or 10.90 Pounds Sterling).

“I hope we can mark May 1st with strong messages, but in a peaceful and responsible fashion”, Franziska Giffey said. “We are firmly opposed to violence and hatred, on May 1st and every day.” She stated the police officers from Berlin and other states who would be on duty today under difficult conditions had her utmost respect. She thanked them “on behalf of all Berliners”. The Governing Mayor is scheduled to take part in the big, traditional Labor Day rally organized by the DGB, which is the German umbrella organization for all unions. In the afternoon, she will talk to the Berlin Police Department’s operational command.

For today, as many as 19 protests were registered with the police. Most of them are Labor Day rallies of different kinds. At least one of them was organized by communists, another one by the far-left party ‘Die Linke’. There are one bicycle parade, one motorbike parade and several local Labor Day rallies. Two demonstrations against Corona deniers are supposed to take place as well, and one by Nazis who are demanding “the resignation of the entire federal government”, its arraignment “in front of a military tribunal” and what not. This kind of nonsense seems to be covered by freedom of speech.

But the biggest threat today is not the extremist right, but the extremist left. It’s ‘Revolutionary May 1st’ rally will include hundreds of participants who are ready and willing to become violent, the authorities believe. This is the main reason why more than 5,000 police officers will be on duty all over the city. The Berlin Police Department follows a de-escalation strategy in these situations. For today, it added the overkill approach it usually choses on May 1st, because of this particular protest.

On Saturday, this year’s Walpurgis Night protests took place. The largest one of them was a feminist rally the participants of which demanded an end to violence against women. “Take Back the Night” was this demonstration’s motto. When a few participants attacked police officers with bottles and threw paint bombs at shops, some arrests were made. But, apart from a few individuals who were violent during this rally against violence, most demonstrators were peaceful.

Today, the many Labor Day protests will hamper traffic in Berlin, especially in the city center(s), Kreuzberg and Neukölln. Several streets are already closed to motorized traffic. Using public transport or moving around by bicycle makes a lot of sense today.

Berlin: Some Incidents Registered at May 1st Protests, Antisemites Rally in Spite of Ban