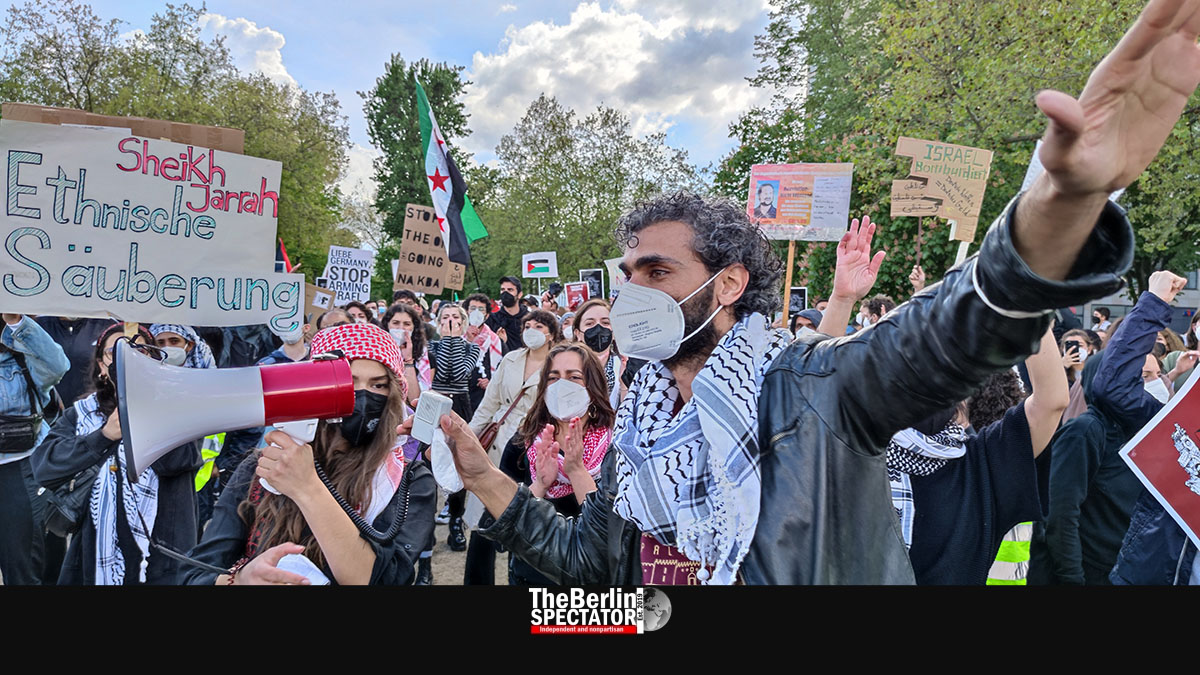 The latest display of Jew hatred on the streets of the German capital terrified the Berlin Senate and the federal government. While the Berlin Police Department is still investigating offenses registered at last week’s ‘protests’, it banned comparable events for three days.

Berlin, April 29th, 2022 (The Berlin Spectator) — Seventy-seven years after the Allies defeated fascist Nazi Germany and ended the Holocaust in which 6 million Jews and hundreds of thousands of members of other minorities were murdered, the Federal Republic of Germany still has a big problem with Jew hatred. This condition is known as antisemitism.

It is wide-spread in the extremist right, but also the radical left. The BDS movement unites left-wingers and antisemites from within the large Muslim community in Germany. It basically says “Do not buy from Israelis”, decades after the Nazis said “Do not buy from Jews”. The Al Quds March, an antisemitic rally at which an extinction of the only predominantly Jewish state in the world has been demanded many times, was cancelled this year, but Jew haters tried to replace it with similar events.

A week ago, two ‘pro-Palestinian’ demonstrations took place in Berlin’s Neukölln and Kreuzberg boroughs. In both cases, antisemitic chants and incitement were registered. Police officers were attacked and journalists threatened. It was not the first time. Last year, the extinction of Israel was demanded at several ‘protests’ in the same Berlin neighborhoods. One of them had been organized by Samidoun, an ‘NGO’ that is affiliated with the terror organization PFLP, another one by ‘Palästina spricht’, an organization which spreads the same kind of pro-terror propaganda and conspiracy theories about Israel.

That same group is active in other German cities as well. In Berlin, it was going to stage yet another ‘pro-Palestinian’ protest today. Again, the plight of the Arabs who have called themselves Palestinians since the late 1960s is not what these rallies are about. ‘Palästina spricht’ does not mention the fact that the areas they call Palestine are being ruled by a terror organization called Hamas and Mahmoud Abbas, a President who was elected for four years seventeen years ago and openly admits to supporting terrorists financially.

The group does not mention the corruption in those areas, the Palestinian terror against Israeli civilians or the missile attacks against Israel that are being launched from Gaza all the time. At those ‘protests’, the fact that the Palestinian-Arab leaders have rejected all peace deals since 1948 because the proposals included the existence of the state of Israel, while the Israeli governments agreed to all of them, is not being mentioned either. Those protests in Berlin are not ‘pro-Palestinian’ as they claim to be, but antisemitic. Both calling for violence against Israel and spreading lies about the same state are among the most common forms of antisemitism (see working definition of antisemitism by the IHRA).

After the most recent antisemitic rallies, the authorities in Berlin launched investigations because of incitement, breach of the peace and assault. Now, the authorities banned all ‘pro-Palestinian’ demonstrations until May 1st, because the city does not want to tolerate more antisemitic chants and incitement on its streets. One of those protests was supposed to take place today.

Berlin’s Interior Senator Iris Spranger stated the kind of antisemitic slogans that had been spread at last week’s protests were “completely unacceptable”. She said she supported a ban of similar rallies, if the legal requirements for this measure were existent. Society needed to take a stand against antisemitism, no matter where it came from. Germany’s Interior Minister Nancy Faeser said there was no place for Jew hatred in this country. Uwe Becker, the chairman of the German-Israeli Circle, demanded a general ban of anti-Israeli demonstrations in Germany.

Violence Expected on May 1st

In the meantime, Berlin’s authorities are preparing for many rallies on Labor Day, which is May 1st. Most of them are expected to be peaceful. The problem is the ‘Revolutionary May 1st’ event staged by left-wing extremists many of whom will likely resort to violence, as usual. Five thousand police officers from Berlin and other federal states are supposed to protect the city.

The main photo at the top of this page was taken at an antisemitic protest organized by ‘Palästina spricht’ in 2021.