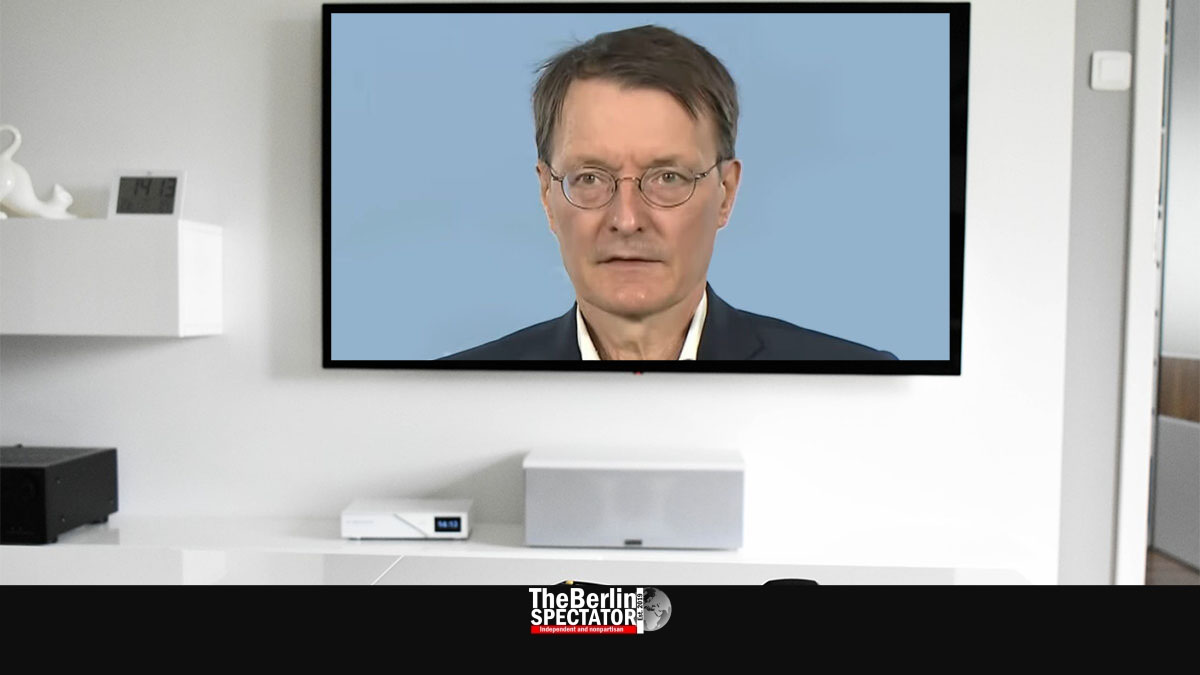 It took Health Minister Karl Lauterbach and Justice Minister Marco Buschmann weeks to agree on new Corona measures for the upcoming cold season. But not all federal states are satisfied. At the Conference of Health Ministers, some participants criticized the latest plans. Lauterbach defended them on ARD television.

Berlin, August 10th, 2022 (The Berlin Spectator) — Professor Karl Lauterbach, Germany’s Health Minister, is infected with Corona. Since his symptoms are mild, he does work, but from his home office. The Social Democrat (SPD) is very busy because there is a lot to discuss. Just before he got infected, a week ago, he and Marco Buschmann, a Free Democrat (FDP) who runs the Justice Ministry, agreed on the details for an amendment of the Infection Protection Act.

At yesterday’s Conference of Health Ministers, which includes Lauterbach and his colleagues from the capitals of Germany’s sixteen federal states, some participants were critical of the plans for the fall and winter. The Corona part of Germany’s Infection Protection Act expires on September 23rd, 2022. For the cold season, the states need new options for rules they can put in place if and when the Coronavirus infection numbers are high.

According to the plan Lauterbach and Buschmann agreed on, a mandatory mask rule can be put in place at restaurants, cultural venues and sports facilities. Persons who got their last Corona vaccination less than three months ago, as well as those who just recovered from COVID-19 or who tested negative, are supposed to be exempt. This is the aspect neither the Bavarians nor the Lower Saxons like. They say freshly immunized or recovered individuals could pass on the virus as well. Therefore, they demand changes to the plans. Besides, the critics believe the exceptions to the rule could be hard to implement because checking all certificates takes a long time.

In spite of his Corona infection, Minister Lauterbach appeared in the ‘Tagesthemen’ news show on the ARD network’s first TV program last night. He said the Corona App many Germans use would be programmed to show immunization certificates in different colors, depending on the date they were issued. That way, they would be easy to check. He also stated there would hardly be freshly vaccinated persons at the beginning of the cold season anyway.

What Karl Lauterbach tried to defend on television was a compromise that was hard to get to. Marco Buschmann’s center-right FDP, one of Chancellor Olaf Scholz’ coalition partners, has its own idea of freedom. To many prominent members, letting people decide about vaccinations and masks on their own is freedom, while the center-left Social Democrats see the necessity to pressure people into getting vaccinated or force them to wear masks in order to make sure all others can enjoy more freedom.

The discussion continues. After the summer vacations, in early September, both the Bundestag and the Bundesrat are supposed to approve the new Infection Protection Act. In the meantime, the number of new Coronavirus infection in Germany still is at a very high level, but it seems to be decreasing. The Seven Day Incidence is 366.8. It was 672.9 a month ago. According to the Robert Koch Institute, 72,737 new Corona infections were reported in the past 24 hours. On July 10th, there were 141,862 new cases.