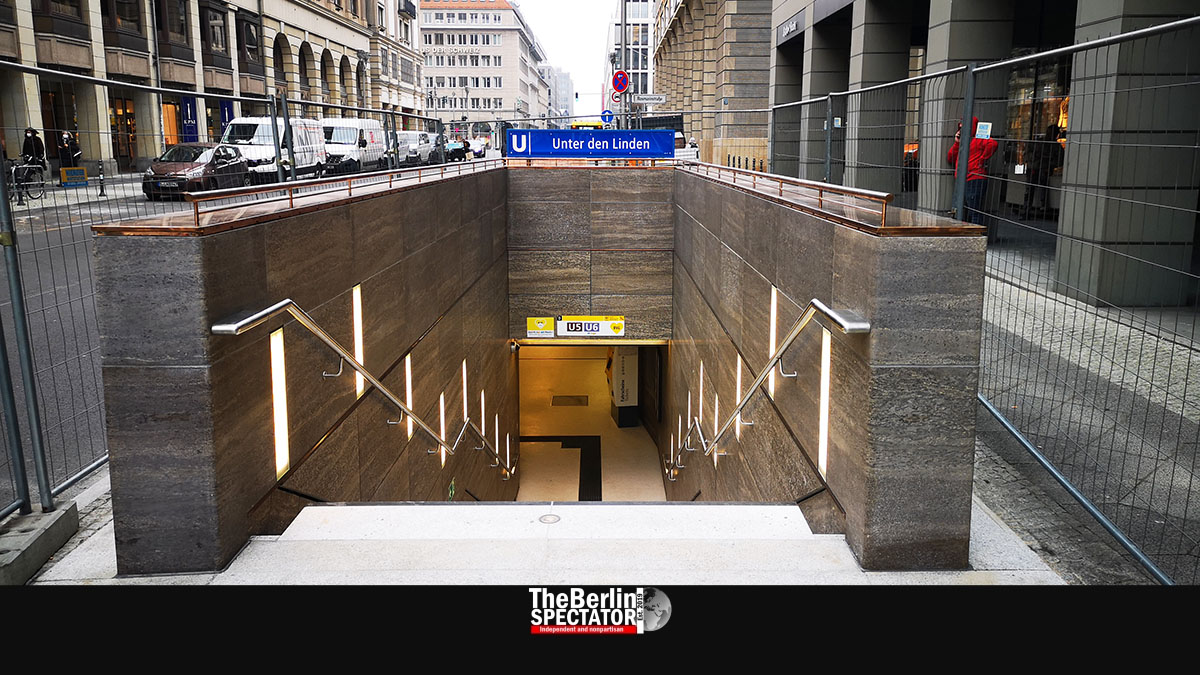 Yet another big endeavor is almost completed in Berlin. The new ‘U-Bahn’ line U5 will help commuters and tourists, once they return to the city of cities. It opened as soon as today.

Berlin, December 4th, 2020, update 10:27 a.m. (The Berlin Spectator) — Everyone knows the German language has some rather long words. Untergrundbahn is one of them. It means underground, tube, metro or subway, depending on the country or city people are talking about. Because even the Germans themselves like shorter words and abbreviations, they say ‘U-Bahn’ instead.

There is a lot of talk about the Berlin ‘U-Bahn’ these days, for a good reason: The U5 line was just extended. It will now go from Hönow station, located at the border between Berlin and Brandenburg province, all the way to Berlin’s central station. The stretch between Alexanderplatz and Brandenburg Gate had to be constructed. It was a rather complicated endeavor. And it was not free, by the way.

A large station that already existed, with multiple ‘U-Bahn’ and ‘S-Bahn’ lines.

New station underneath Museum Island. This one will not open until next year.

New station with entrances on Friedrichstrasse and Unter den Linden. This is where the U5 connects to the U6.

This one already existed.

One U6 station, Französische Strasse is closed now, for good, because it is only a few steps away from Unter den Linden station, meaning it will not be needed anymore. On Thursday, some young people who wore jackets with the logo of Berlin’s public transport provider BVG, but no masks, spoke to passengers who entered or left the station. They informed some of them about the changes that apply from today. But they said most people already knew.

Most of Berlin, including the Senate, is happy to have the new U5 stretch. Not only will it help commuters, but also tourists. At this stage, there are none of the latter. Once they are back, they will not see a lot down there in the ‘U-Bahn’ tunnel, apart from three elegant new stations. But the U5 will help them get from one sightseeing spot to the next in case they do not want to walk.

The big moment arrive this morning, when Governing Mayor Michael Müller, the BVG’s CEO Eva Kreienkamp and others took that first U-Bahn ride. At about noon, the first regular trains were going to race back and forth. During and around business hours, trains will be coming every 5 minutes. Since Museum Island station will not be ready until the summer of 2021, the ‘U-Bahn’ will not stop there for now.

During the little inauguration ceremony, Governing Mayor Michael Müller said the gap closure was important for the city. He was very happy the project, with all of its challenges, had been completed after a long construction phase. The new stations were beautiful, Müller stated. He took part in an ‘U-Bahn’ ride from Red City Hall station to Unter den Linden.

Berlin has a new airport now. Well, it is sharing it with Brandenburg. And it has the U5 which now contains the missing link. Everyone is happy. Well, almost everyone. A new study reportedly came to the conclusion that the construction of new ‘U-Bahn’ lines generally causes a lot of air pollution. In order to make up for the CO2 that is being blown out, a metro line needs to be run for 100 years. If that is the case, the U5 will be climate-neutral in 2120. Maybe those environmental NGOs will be happy then.

There is something neither the U5 nor any other train line in Berlin has: safety walls. Sofia, the Bulgarian capital, just inaugurated its third metro line the stations of which feature glass walls on both sides of their platforms. Once a train arrives, its doors align with the doors in those safety walls. A pretty good feature, right?