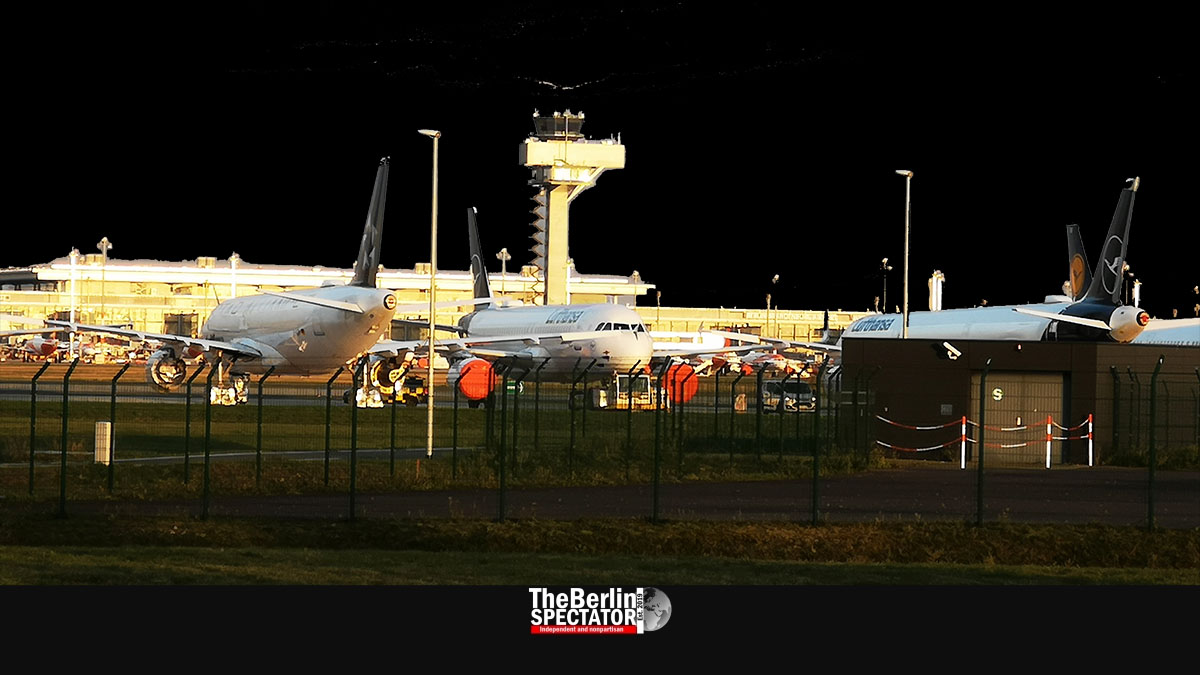 At airports in Germany, an entry ban the government put in place for passengers from the United Kingdom, because of a more aggressive Coronavirus mutation that is spreading there, has led to issues. The ban is supposed to be tightened today.

Berlin, December 21st, 2020, update 11:47 a.m. (The Berlin Spectator) — In Brandenburg, at BER Airport, flights from the U.K. were still listed as scheduled at 6:40 a.m. on Monday, in spite of the fact that an entry ban for flight passengers from there was put in place at midnight on Sunday. Incoming flights from Edinburgh, Stansted, Heathrow, Nottingham, Gatwick and Manchester were still not marked as cancelled.

The ‘Welt’ daily reported, passengers who had flown to Hanover from London had been forced to spend the night at the airport, on cots. According to the newspaper, they will not be allowed to leave the airport until the results of Corona tests come in. The passengers had to take them upon arrival.

According to reports from Britain, the new Coronavirus mutation is 70 percent more contagious than the version the world has been battling for a year now. The first country in mainland Europe that had put in place a ban for flights from the U.K. was the Netherlands. Other European countries took similar moves on Sunday. In Germany flights to the U.K. are still allowed, as opposed to flights from there. The same kind of ban might be in place for travelers from South Africa soon, because of yet another Coronavirus mutation that has been spreading there.

Today, Germany intends to announce a full entry ban for persons coming from the United Kingdom, no matter what means of transport they use or where they had stopovers. The European Union was moving in that direction too. According to some German media reports, the Eurotunnel is closed already. The same seems to be applying to the ferry terminal in Calais.

Throughout Europe, the situation had already be alarming before the new Coronavirus mutation was reported. Now the shocking spread of the new version of the virus led to unprecedented steps. More are expected today. Germany’s Health Minister Jens Spahn said in TV interviews, the new mutation had not been detected in Germany.

In northern Germany, the city of Lübeck put in place stricter measures because of the alarming spread of the “old” Coronavirus. Only one person per household may enter supermarkets. Persons from one household may gather with only one person from another household. The authorities took these steps because the Seven Day Incidence Number in Lübeck exceeded the 200 mark.

There are many more German cities and counties in which this is the case. Berlin is one of them. In spite of the situation, about 1,000 people protested against the government’s anti-Corona measures again on Sunday. Only two miles away from the “silent march” the Corona deniers staged, people died from COVID-19 at hospitals.

Berlin’s Charité university clinic is already working in emergency mode because of the growing number of Corona patients. In the meantime, dozens of persons were standing in line for Corona tests in front of the former fetish club ‘KitKat Club’ on Sunday. Tests have been offered there for two weeks now.