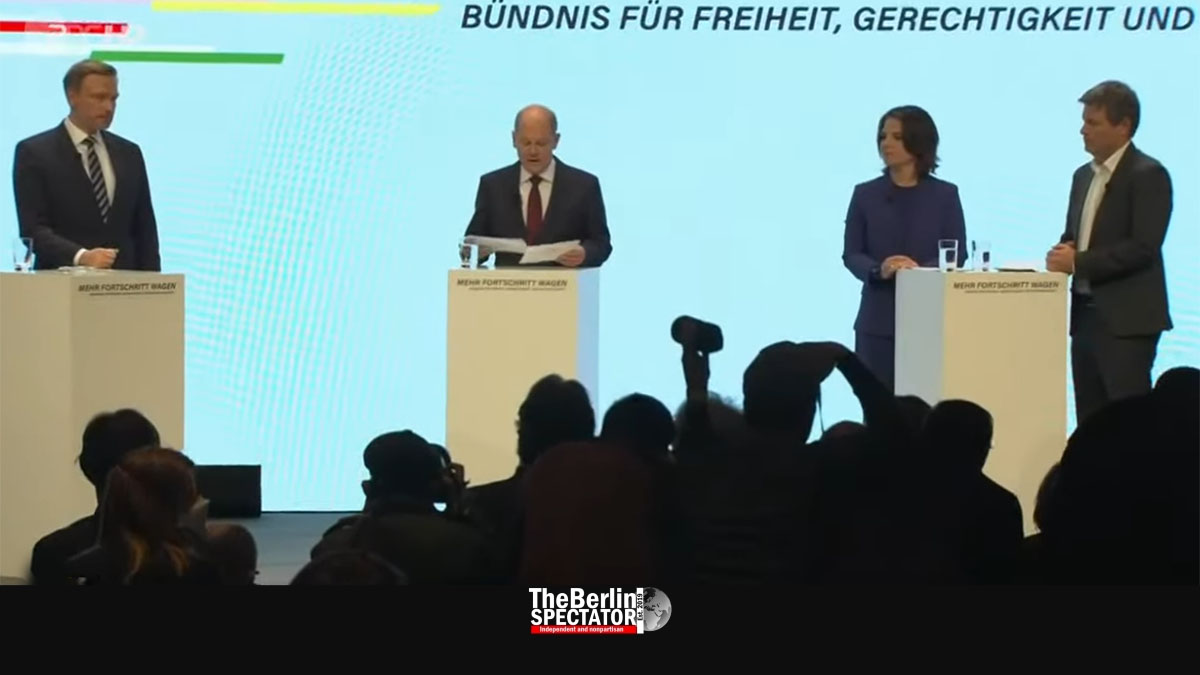 The wind of change is blowing through Berlin. Olaf Scholz and his coalition partners introduced ambitious plans they intend to implement. On or just after December 6th, the Bundestag is supposed to elect him Chancellor.

Berlin, November 25th, 2021 (The Berlin Spectator) — When the late Willy Brandt was elected Chancellor by the Bonn Bundestag on October 22nd, 1969, one of the sentences he said was for the history books: “We intend to dare more democracy.” Now, 52 years later, the future government headed by another Social Democrat, namely Olaf Scholz, wants to “dare more progress”. These statements sound more convincing in German than they do in English.

The ‘traffic light coalition’ got its name from the colors attributed to the three parties involved. The center-left Social Democrats (SPD) are red, the left-wing, environmentalist Greens are obviously green, and the center-right Free Democrats are yellow. Traffic lights stop the traffic and they let it go again. What will it be in the case of the future government of the strongest economy in Europe, and a rather big country, from the European perspective? Will the traffic light stop it or make it move?

For the conservative Christian-Democratic Union (CDU), which will be part of the opposition for the first time in 16 years, its secretary general Paul Ziemiak commented on the coalition agreement by saying there were “more question marks than exclamation marks”. The party’s floor leader at the Berlin Bundestag, Ralph Brinkhaus, was not convinced either: “We do not really see the awakening”, he stated. The party’s departing chairman Armin Laschet, on the other hand, congratulated the ‘traffic light coalition’.

Scholz’ new government came up with very ambitious plans. First of all, it intends to step up the fight against the Corona pandemic. Whether the measures Scholz announced are strong enough remains to be seen. These are some of the other plans the future government wants to implement:

Three more hurdles need to be taken. Before the Bundestag can elect Olaf Scholz Chancellor, the three parties need to approve the coalition agreement. This step is supposed to be completed by December 5th. On or shortly after December 6th, the parliament can vote.