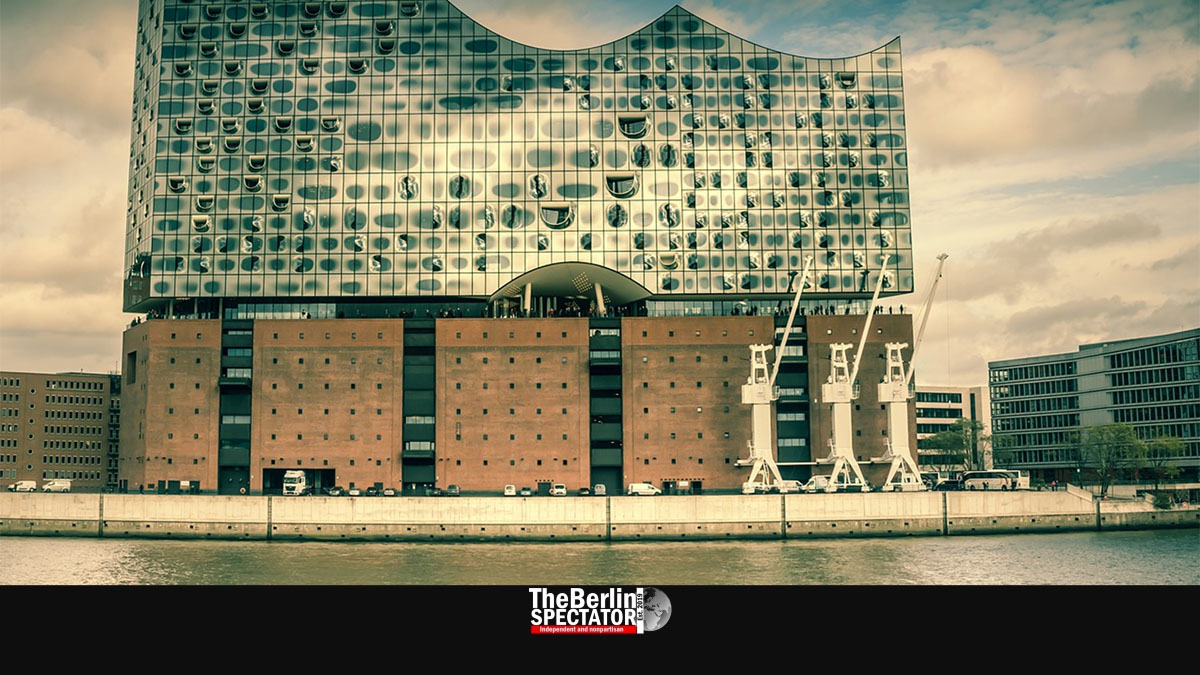 To some, it looks like an oversized cookie someone took three bites of. But most would agree that the ‘Elbphilharmonie’ is about as elegant as the Sydney Opera House. Its beauty is unbeatable. So is its sound.

Berlin, January 10th, 2022 (The Berlin Spectator) — In 2017, the world was still standing. The word “Corona” was used at restaurants and bars only, whenever beer brands were discussed or ordered. Masks were worn at the carnival and in surgery only. Distance had to be kept between Rottweilers and Pitbull Terriers. And measles vaccinations were mandatory for schoolkids. On January 11th of that year, exactly five years ago, Hamburg’s Elbe Philharmonic was inaugurated.

In Hamburg, life was supposed to become even better, when the city state decided to go ahead and build a new landmark. The Elbe Philharmonic Hall would spread beauty, brilliant music and impress not only tourists with their Nikons and Canons, but also Hamburgers with cheese and onions. The building the Germans call ‘Elbphilharmonie’ was not supposed to be built at some square somewhere in the city, but right inside another landmark Hamburg calls its own, namely the port. They basically wanted to place the new concert hall in the water.

To some, the plans were exaggerated, pretentious, unnecessary and far too expensive. In 2001, the architect Jacques Herzog and his wife Jana Marko presented the original idea to the Hamburg Senate. At first, First Mayor Ole von Beust was not too enthusiastic, but a year later, he announced the construction of a new concert hall at the port. The price he mentioned was 50 million Euro (56.8 million U.S. Dollars or 41.8 million Pounds Sterling).

Jacques Herzog teamed up with his colleague Pierre de Meuron. They presented their architect’s plan in 2003, just before the Hamburg Senate finally decided to go ahead and implement the project. In Germany, things take time. In 2005, a feasibility study was available. Things looked good, except for the price tag the amount on which had more than tripled to 186 million Euro (211.3 million Dollars or 155.5 million Pounds), even before the first turn of the shovel. In 2013, seven years after the construction had commenced, the next First Mayor, whose name was Olaf Scholz (hint!), announced the tax payer’s contribution to the Elbe Philharmonic would be 789 million Euro (896.4 million Dollars or 659.6 Pounds). On top of this issue, there were tons of other problems, including technical ones. At this point, it was too late to dump the project.

Then, five years ago, on January 11th, 2017, the big moment had arrived. Everyone showed up at the two inauguration concerts, including former critics of the project. When they saw the majestic building standing there, they finally shut up. And when they experienced the concert, they were in love with the acoustics too. So were First Mayor Olaf Scholz, Chancellor Angela Merkel, President Joachim Gauck, countless other prominent guests and 1,000 Hamburgers with cheese and onions who won their tickets in a lottery. They needed a lot of patience. Before they could finally present their evening attire to everyone else, they had to listen to eleven compositions that night, played by the Elbe Philharmonic Orchestra, from Benjamin Britten to Ludwig van Beethoven.

What will a major concert hall, a haven for mainly classical music, do on its fifth anniversary? It will not put up a giant disco ball and have people dance to the sounds of Earth, Wind & Fire, The Brothers Johnson and Chic, but stage a concert with mostly erudite music. Its very own orchestra and conductor Alan Gilbert will get to work. The good news is that tomorrow’s anniversary concert will be streamed all over the place. Fortunately, the Coronavirus does not spread via Internet streams, at least not yet. Compositions by John Adams, Thomas Adès and Esa-Pekka Salonen are on the playbill. The soprano singers Anu Komsi and Piia Komsi will probably not wear medical masks during their performance, which will undoubtedly be brilliant.

It gets better: The anniversary will be celebrated for an entire week. On January 13th, Sir Simon Rattle is scheduled to perform with the London Symphony Orchestra. On the 16th, the American composer Suzanne Ciani will hit the stage. Her compatriot John Scofield, a Jazz and Fusion guitar genius, will be there too, on Saturday. No tickets are available for Charles Lloyd, another American Jazz hero, unless you have a time machine. His concert took place yesterday, at the most sexy concert hall on the European continent.

Related feature: Hamburg: ‘My Beauty of the North, I Love You’