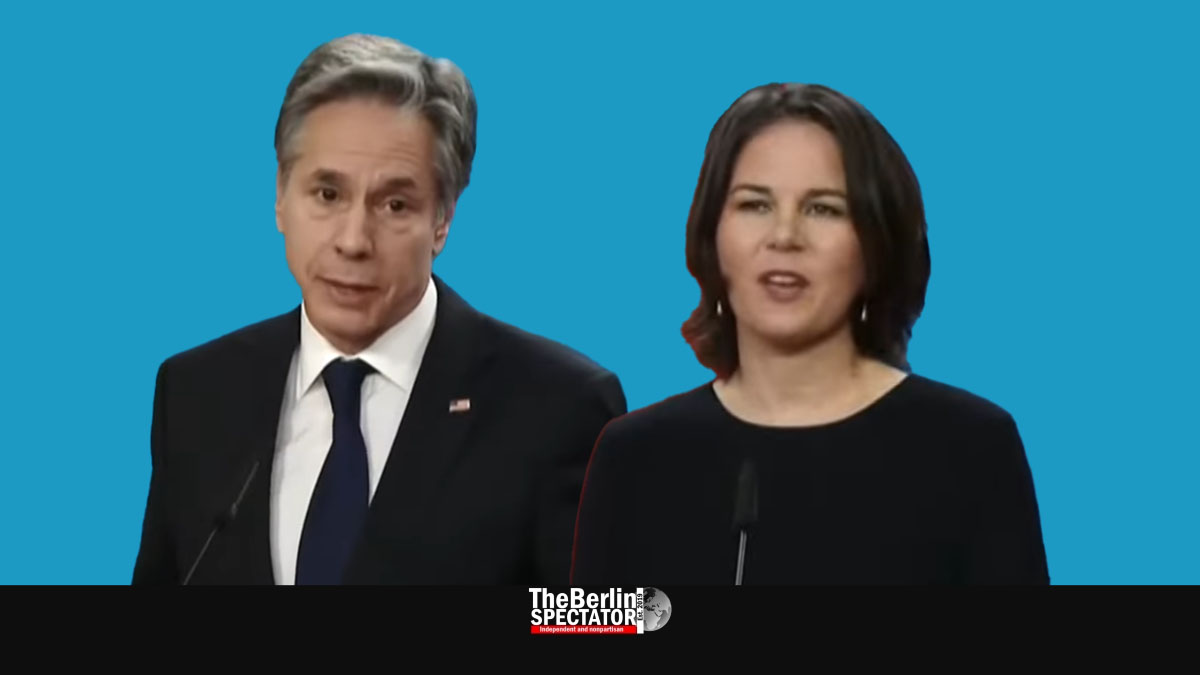 In Berlin, U.S. Secretary of State Anthony Blinken and Germany’s Foreign Minister Annalena Baerbock held talks about their approach in the Ukraine crisis Russia is causing. Their goal is to “ease the tensions”, and their weapon is diplomacy.

Berlin, January 20th, 2022 (The Berlin Spectator) — In Berlin, Annalena Baerbock and Anthony Blinken sent another unambiguous message to Moscow. “We are urgently calling on Russia to take deescalating steps. More aggressiveness will have grave ramifications”, Annalena Baerbock said. The efforts undertaken by Germany, the U.S. and other partners were about “nothing less than the preservation of peace in Europe”, which was existential and needed to be protected. Even if the necessary measures had economic ramifications they would be taken, the new German Foreign Minister vowed.

Another Trip to Ukraine

Mrs. Baerbock also said NATO’s Secretary General Stoltenberg had just invited the members of the organization’s Russia Council to a new round of talks. This was an important signal. In spite of the “fundamental differences” that existed, those talks had potential. The Minister also announced another visit to Ukraine with her French colleague Jean-Yves Le Drian, which is supposed to take place “soon”.

With Secretary Blinken, she also talked about another crisis, namely Iran and the stalling negotiations about the agreement known as ‘Iran Deal’ in Vienna. The United States and Germany acted in concert in this regard too, the Minister stated. Iran was in the process of extending its nuclear program. Therefore, the timeframe for a resolution of this conflict was closing rapidly. Annalena Baerbock said the JCPOA talks were in a crucial phase. Progress was urgently needed here as well.

Anthony Blinken summarized the goals of his country and its partners very well: They were “to seek a diplomatic path, to ease the tensions caused by Russia’s massing of troops along Ukraine’s borders, to deter a further Russian invasion or destabilization of Ukraine and to address legitimate security concerns put forward by Russia, by the United States and by Europe, through dialogue, not through aggression.” He stressed the importance of “upholding the international rules that have provided the foundation, for peace, for security, for prosperity in Europe and beyond, for decades.”

Blinken said he was “here to consult and coordinate with allies and partners about how to proceed”. His talks with Annalena Baerbock, Jean-Yves Le Drian and the United Kingdom’s Deputy Foreign Secretary James Cleverly in Berlin took three hours. After his press conference with his German colleague he held a speech at an event organized by the ‘Atlantik-Brücke’ after which he was scheduled to head to the chancellery for talks with Chancellor Olaf Scholz. On Friday, Blinken will meet his Russian counterpart Sergey Lavrov in Geneva.

The ‘Only Practical Way’

On Tuesday, Mrs. Baerbock had been in Moscow, where she held talks with Lavrov and accused Russia of threatening Ukraine. During her visit, and today in Berlin, she hinted the North Stream 2 natural gas pipeline project was on the line here too. The German Foreign Minister also stressed diplomacy was “the only practical way”.