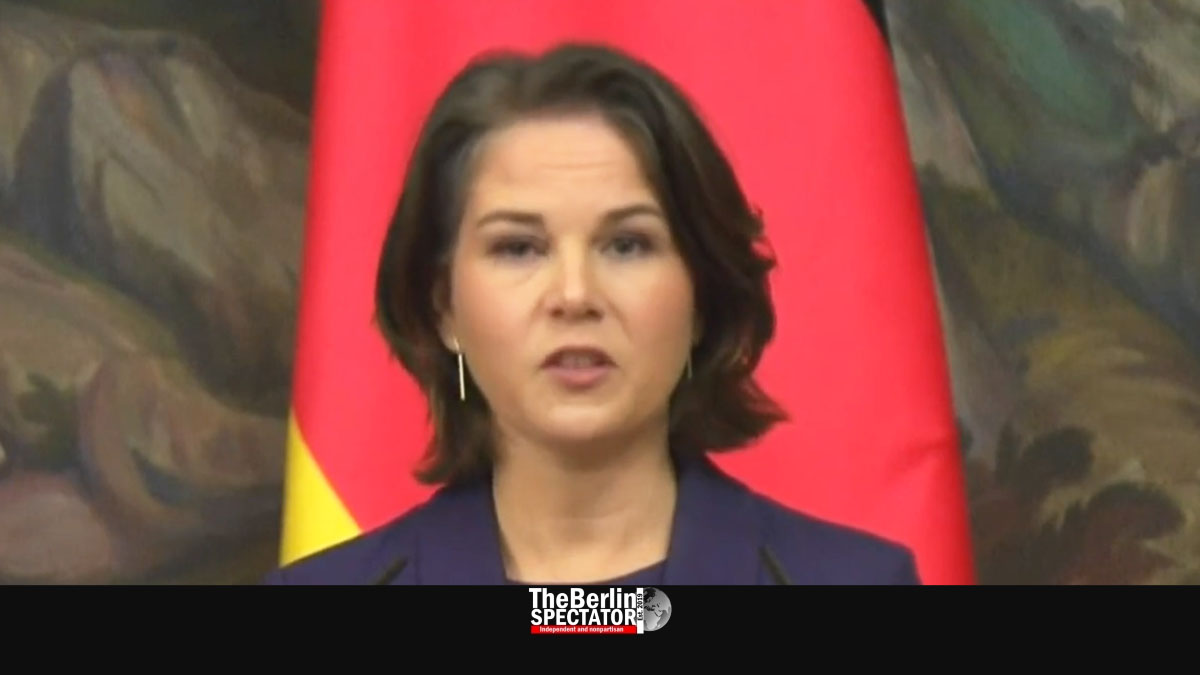 Berlin, January 18th, 2022 (The Berlin Spectator) — Massing tens of thousands of soldiers at the Ukrainian border is something Foreign Minister Lavrov calls an activity “on our own territory” nobody had the right to interfere with. To Annalena Baerbock it is an obvious threat. Even if Russia had not attacked and annexed Crimea in 2014, she would have been right. But, because it has, Moscow’s move obviously is extremely dangerous.

Her visit to Russia is the most difficult trip Annalena Baerbock has taken so far, in her new role. At the press conference she cut quite a figure, in spite or because of those “fundamental differences of opinion” she mentioned. The friendly young lady, who was 9 years old when the first Cold War ended, and who took over the Foreign Ministry only a month ago, turned into a tough representative of the Federal Republic of Germany, as she was bombarded with contortions of reality. All the smiles were gone. The Green Minister chose the appropriate approach.

Obviously, the Russian government lives in a parallel universe in which wrong is right and untruths are the truth. Putin and Lavrov have gone back to the kind of victim blaming the Soviet Union was good at during the first Cold War. Ukraine is to blame for being threatened, a Putin foe named Navalny is to blame for the murder attempt against him and for being put in jail as a political prisoner, and everyone but Moscow is to blame for the Tiergarten murder case, in which an FSB agent killed the Chechen Georgian national Zelimkhan Khangoshvili in broad daylight, in Berlin.

In yet another context, the truth was bent rather far in Moscow today. In tandem with a lady who works for the Russian channel RT (formerly ‘Russia Today’), Lavrov accused the Berlin government of suppressing the freedom of the press by not letting RT broadcast its program via the German cable TV system, even though it is the media authority MABB in Berlin which made sure the station’s cable channel was shut down, because of several issues.

First of all, the way RT got its license, via Belgrade, does not conform to German regulations. Neither does the direct exertion of influence of a state on any media organization. RT is obviously being controlled by the Kremlin. On top of it all, RT is being accused of spreading disinformation and conspiracy theories. Its Internet channel is still accessible in Germany, in spite of it all.

In Moscow, Mrs. Baerbock is in for a balancing act. She has to keep the dialogue open, but still discuss the issues that are affecting the relations between Europe and Russia negatively. Different opinions about North Stream 2, the big Russian-German pipeline project, in her own government do not exactly make things easier for the young Foreign Minister.

Before her arrival in Moscow, she had visited Kiev where she promised her Ukrainian colleague Dmytro Kuleba Germany’s “diplomatic support”. At the same time she ruled out the delivery of weapons. “Diplomacy is the only practicable way”, she said. Not only the European Union member states are hoping Russia will not show what it thinks is practicable.