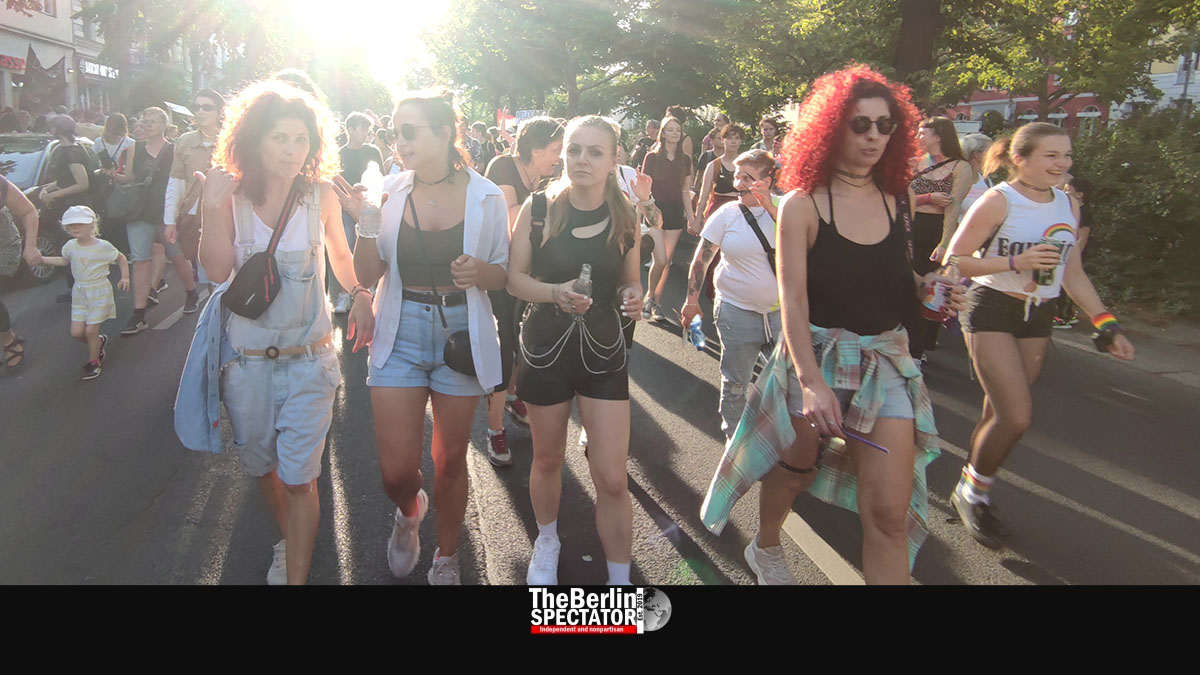 On the eve of Berlin’s Christopher Street Day, hundreds of lesbians and their supporters took part in a rally against hatred and for equality. The participating ‘dykes’ wanted to increase their visibility in the LGBTIQ community.

Berlin, July 22nd, 2022 (The Berlin Spectator) — Hundreds of lesbians and other protesters appeared at Platz der Luftbrücke (Airlift Square) exactly 18 hours before Berlin’s Christopher Street Day parade was scheduled to begin. Within the LGBTIQ community, gay men were dominant, for several reasons, a participant of the Dyke March told The Berlin Spectator on site. This was why lesbians wanted their own event, in addition to the CSD parade, she explained.

“For years now, thousands of dykes and their supporters have taken to the streets to celebrate lesbian presence in the LGBTQI community and to increase their visibility”, the organizers said before this year’s Dyke March commenced in Berlin. “We take a stand against hatred and violence and fight for equality, both within our communities and in society in general”, a statement read.

Before 6:00 p.m., the police blocked motorized traffic at the intersection of Tempdelhofer Damm, Columbiadamm, Dudenstrasse and Mehringdamm. From this starting point, the crowd moved towards Hermannplatz square, Sonnenallee and Treptower Park. At a club located there, a party was going to take place after the parade.

Dykes on bikes, a group of lesbians on motorcycles, were part of the protest too. At some point, they separated from the walking protesters and staged they own rally. Both parades attracted a lot of attention. Passers-by stopped and looked at the women and their supporters of all genders. From their balconies, residents in Berlin’s Kreuzberg borough followed the action as well.

An incident slowed down the Dyke March at the beginning. As it turns out, there is a conflict within the lesbian community. A group of young women who oppose the inclusion of transsexual individuals with male sexual organs in the community tried to head the parade with their signs. But they were not the ones who registered the event. It took the police a while to talk them into making room for the actual parade by getting out of the way.

Around the Dyke March Berlin, traffic was tight. Hundreds of motorists were stuck on Mehringdamm when the parade commenced. Along the entire route, Berlin’s Friday evening traffic was affected. While the organizers of the Dyke March were hoping for 5,000 participants, half a million people were expected to join Berlin’s CSD parade on Saturday, July 23rd, 2022.

Berlin: Authorities React to Violence at Swimming Pools and Excesses at Parks