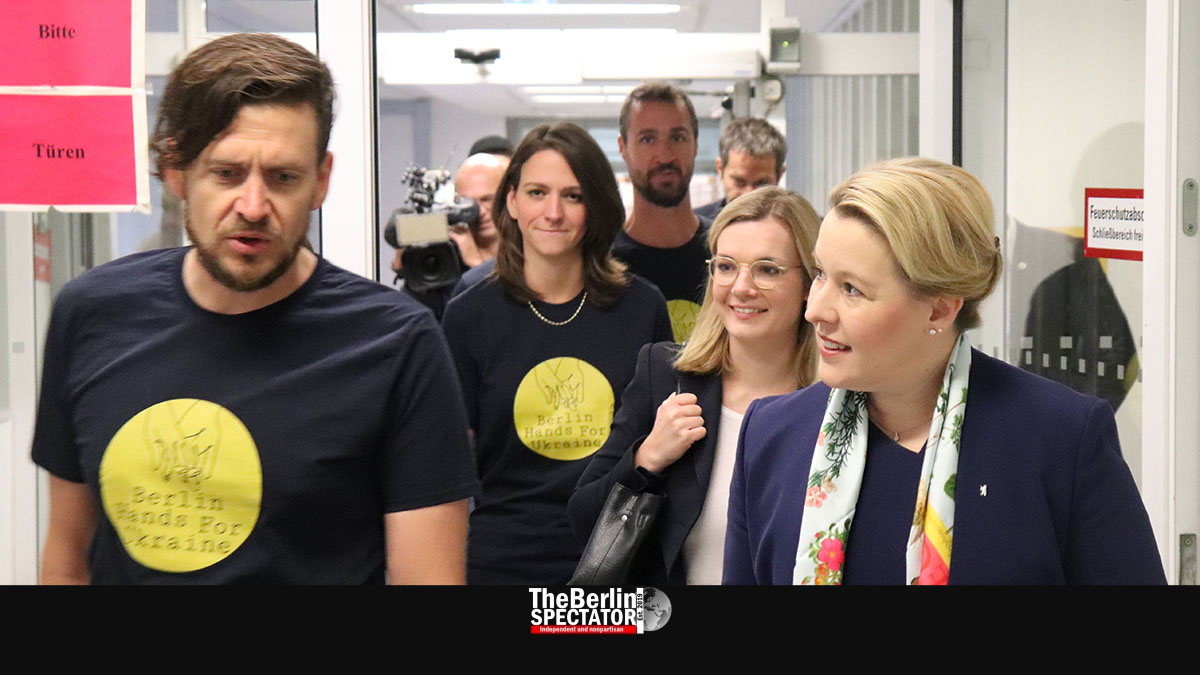 Berlin’s Governing Mayor Franziska Giffey spoke to members of an aid organization on Thursday. The NGO ‘Berlin Hands’ is about to send 6 metric tons of food to Ukraine. This kind of aid is still needed, but the readiness to donate is decreasing.

Berlin, September 8th, 2022 (The Berlin Spectator) — When Russia first attacked its neighbor Ukraine more than half a year ago, hundreds of thousands of people joined protests in Berlin. In front of the Russian Embassy, rallies against Putin’s war of aggression took place all the time. By now, frustration has replaced those activities. Demonstrations alone will obviously not end the war.

During the first months, hundreds of Berlin’s finest helped Ukrainian refugees and persons of other nationalities who lived in Ukraine when Russia started the war. Berlin had accommodated some 300,000 war refugees from there, Franziska Giffey said today, when she met eight members of the NGO ‘Berlin Hands’. Almost a million Ukrainian refugees were counted in all of Germany. Those who are here are getting all kinds of support.

When the nightmare began, the willingness to donate to NGOs that help Ukrainians in their country was there. Millions of Euro and tons of commodity contributions were given to organizations of this kind. As ‘Berlin Hands’ told the Governing Mayor today, this has changed. These groups still need contributions because aid of all kinds is still needed in Ukraine as long as the war is continuing.

Franziska Giffey looked at several pallets of food that was stored in a room the Berliner Sparkasse, a major bank, made avialable to the NGO. It includes oatmeal, sugar, salt and tomato sauce. For ‘Berlin Hands’, its chairman Timo Brückner told The Berlin Spectator, the food there, and more from several storage rooms in the city, would be taken to the Polish-Ukrainian border on Friday, on a truck that was borrowed to the organization by the employer of one of its members. From there, Ukrainian partners are supposed to take the goods to Zaporizhzhia.

This is where residents of Melitopol have fled to because their town is occupied by the Russian invaders. Melitopol’s Mayor Ivan Fedorov had visited Berlin in April. Back then, he asked for relief aid. Since, Berlin has supported him. The donations needed for tomorrow’s delivery were collected at a recent fest at Red City Hall that was hosted by Franziska Giffey.

Until today, the ‘Berlin Hands’ NGO has taken nine trips to Ukraine. They mostly drove right into the country. Apart from food and clothing, they also brought vital medication to the people in need, including children. The organization includes two couples and five other individuals. Its website (in German only) can be found here. Obviously, it includes the NGO’s bank account number for donations.