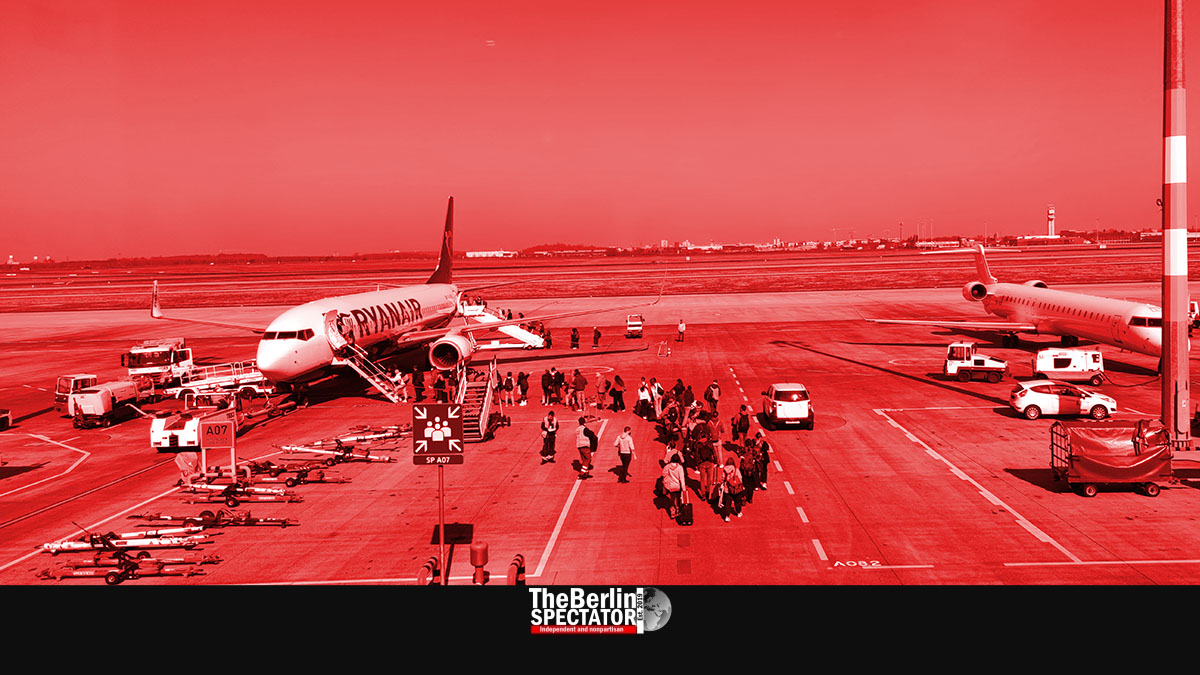 Members of the group ‘Last Generation’ entered taxiways for aircraft at Berlin Brandenburg Airport on Thursday afternoon. As a result, incoming flights were rerouted. In the evening, the airport was back in service.

Berlin, November 24th, 2022. Update: November 25th, 2022, 10:09 a.m. CET (The Berlin Spectator) — Protesters who are part of ‘Letzte Generation’, the German division of ‘Last Generation’, cut chain-link fences at BER Airport on Thursday and staged a protest on the tarmac. This is a further escalation. So far, they had glued themselves to streets and damaged paintings in museums. Twice, they entered ministries in Berlin. But breaking into the security area at a major airport is a new quality.

On a video the radicals posted, the break and entry offense is documented. The footage shows how the protesters stand on taxiways and hold rehearsed speeches about the environment into their video camera. “Millions and billions will die”, one of the activists said. “We only have two to three years to do something.” He was referring to global warming.

For quite a while, nobody stopped the protesters. Some 16 minutes into the video, approaching police vehicles were visible. This was when some of the radicals glued their hands to the taxiway. Later, officers told them they had entered a high security area and threatened to take them out of there by force. “What you are doing here is not good”, another policeman told them.

In the evening, Germany’s Federal Police confirmed there were persons on the tarmac. At least two groups seem to have entered the airport from different directions. Both of BER Airport’s runways had to be closed. According to the RBB radio and TV network, several incoming flights were rerouted to Dresden and Leipzig. This was confirmed by social media users. “I am wondering how they got in there”, one of them wrote. “We have landed in Dresden while we were flying to Berlin. Now we are just waiting here.
How the hell people get into an airport without being checked? Are you serious?”

According to BER Airport’s website, five outgoing flights were cancelled as of 6:11 p.m. CET on Thursday. It was not known whether the protest was the reason, but it probably was. A bit later, the airport was back in service.

Politicians of several parties criticized ‘Last Generation’ harshly. Germany’s Interior Minister Nancy Faeser stated this new escalation was “absolutely unacceptable”. She thanked the Federal Police for dealing with the situation quickly and decisively. Actions of this kind destroyed the acceptability in the society for the fight against climate change, she said.

“How could criminals gain access to the critical infrastructure at BER Airport with a hedge clipper?”, Kai Wegner, the chairman of the conservative CDU in Berlin, asked in a Tweet. ‘Last Generation’ was becoming more dangerous. The perpetrators finally needed to feel the consequences.

‘Last Generation’ has hundreds of active members. The group claims Germany’s government was responsible for “crimes against humanity” because it did not do enough against global warming. A general speed limit of the German Autobahn and a new 9 Euro Ticket are the protesters’ main demands. A few days ago, ‘Last Generation’ had announced activities at airports. Still, the authorities were surprised. BER Airport now wants to improve its security concept.