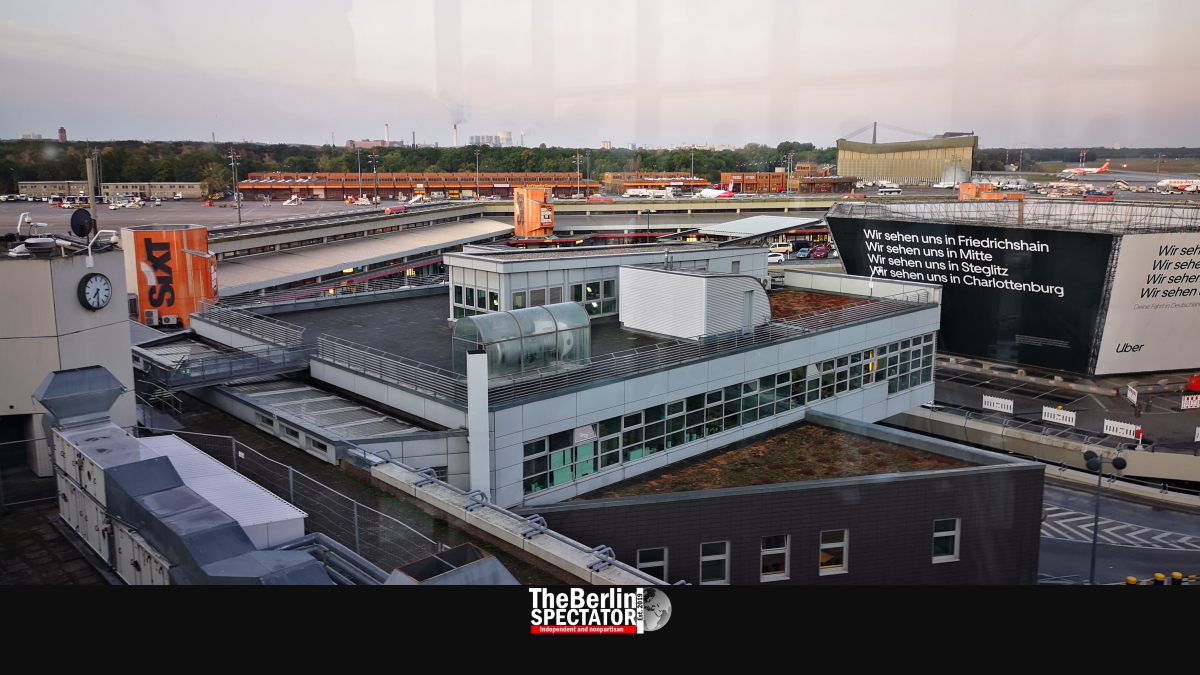 The operator of all major airports in and around Berlin, Flughafen Berlin Brandenburg GmbH (FBB), might soon go ahead and close Tegel Airport temporarily. But more discussions will take place first.

During the Corona crisis, passenger flights slumped substantially. Tegel Airport is not needed because Schönefeld Airport, located just outside Berlin in Brandenburg province, can handle the few passenger flights that are still taking off or landing, and the freight business.

At FBB’s shareholders’ meeting today, the Federal Republic of Germany, as one of the owners, did not vote against closing Tegel as it did last time. The other two owners, namely the federal states Berlin and Brandenburg, have been ready to close the airport for a while now. Another discussion, in two weeks from now, will likely move Tegel further to its shutdown.

Berlin’s Governing Mayor Michael Müller said he would welcome a temporary closure. “We have to see that it just does not make sense to maintain two infrastructures”, Müller stated in an interview with the RBB radio and TV network. “For economical reasons, concentrating on one location is the right way.”

What is being called a temporary closure at this stage could very well last forever. Tegel Airport was going to be shut down on November 8th, 2020, anyway, after the opening of BER, the new airport for the Berlin Brandenburg region. The big day is October 31st. BER Airport’s inauguration will have a delay of nine years.

Once BER is operational, Schönefeld Airport will become its Terminal 5. At least that was the plan before the Corona crisis hit. Because of Corona, it is unlikely that BER Airport’s capacity of 28 million passengers per year will be exceeded anytime soon, meaning the additional capacities the old airport in Schönefeld was going to provide might not be needed.

The opening of BER Airport is six months away. Just yesterday, the building control authority in Dahme-Spreewald county confirmed the completion of the new Terminal 1. At a press conference on Wednesday evening, FBB’s CEO Engelbert Lütke Daldrup said the time of construction was now over. It was time “to make the new terminal fly.”

Lütke Daldrup stated the closure of Tegel Airport, which his company would officially request today, had to do with the fact that the 100,000 guests per day from the times before Corona had shrunk to 1,000. The traffic volume was 1 percent of what it had been before the crisis.

According to Professor Lütke Daldrup, Schönefeld Airport will remain operational because it has a few advantages compared to Tegel Airport, namely a part dedicated to freight and a medical center. Besides, it had a 24-hour permit for flights and it was located close to BER Airport, he said. The date for Tegel Airport’s closure might be June 1st.

Top 10: Corona Statements by German Politicians and their Actual Meaning