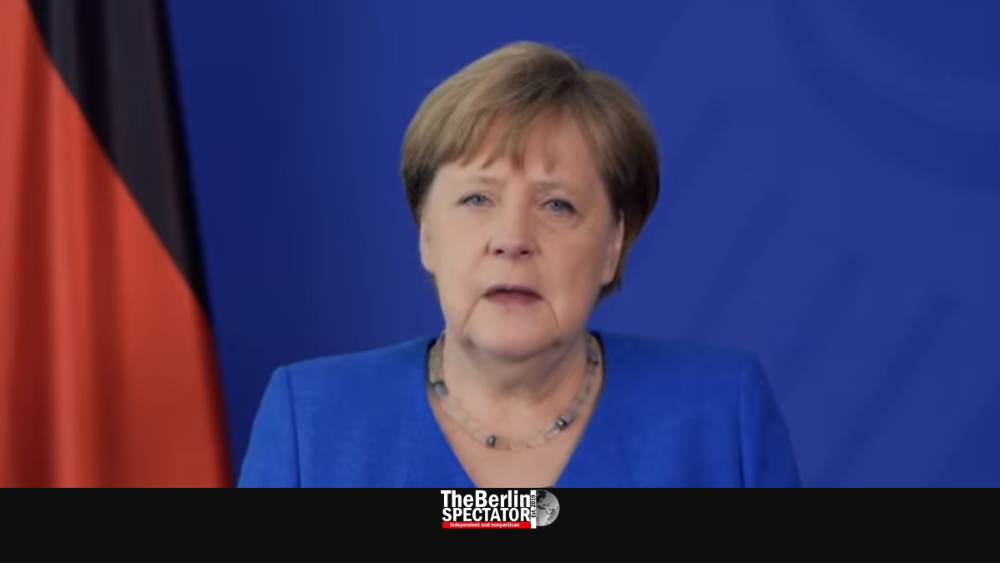 Angela Merkel said she was glad it had been possible to lift some Corona restrictions. At the same time she reminded the German nation to be careful and considerate.

Four months after the first Coronavirus case was confirmed in Germany, Chancellor Angela Merkel stated the crisis had “put our country, our economy and our citizens to the test. It would be great to be able to tell you ‘That’s it, we’re through.’ But without medication, without a vaccine, nobody can say so”, Merkel said in her regular podcast.

“What we can say, and I’m incredibly grateful for that: We have passed this test quite well so far” Germany’s head of government said. “Together, an overwhelming majority of people in our country have have been cautious. We have been guided by reason and responsibility for others.”

Angela Merkel stated a lot of effort had been made. Not overburdening Germany’s health system had been the country’s main success. Since the Corona crisis had commenced, everyone in need had received appropriate medical care in Germany.

The Chancellor also addressed the growing number of conspiracy theorists. Some people believed that, because the masses had not suffered, the danger had not been too grave. “What a mistake!”, Mrs. Merkel said. “A look at partner countries that were hit hard shows what could easily have happened” in the Federal Republic too.

Now, after these first four months of the pandemic, the steep infection curve was not a flat one. The daily number of new infections was manageable, Merkel told the Germans. Health authorities were doing a great job dealing with local Corona outbreaks. They were working on identifying infection chains and interrupting them.

According to Mrs. Merkel, the daily numbers provided by the Robert Koch Institute give hope. “But I often think of the fact that, behind those numbers, there fates.” People had been forced to put up a hard fight against COVID-19. And there had been grief, because more than 8,500 people in Germany had died from it.

At this moment, there were still families who were fearing for the life of loved ones at many hospitals. A scientist herself, Angela Merkel said statistics were important in order to understand how the Corona pandemic was progressing. “But let’s never forget that this is about people.”

She said she was glad public life had started again and that the economy was getting up to speed in some areas. “I hope we can take more steps in this direction, without stoking up the infections again”, the German Chancellor said. “If we are courageous and vigilant, this might work.”

Angela Merkel said life had become very difficult to many people, in the Corona pandemic. She mentioned parents and children, but also those who work in the food service industry, for travel agencies or for cultural organizations. Germany had reacted early on, by establishing enormous aid packages that had helped people keep their jobs, she stated.

But this was not enough. The Chancellor announced yet another economic stimulus plan which is supposed to be approved as early as next week. It was important to make sure the aid programs would push innovation and sustainability too while saving companies and jobs.

Again, Angela Merkel pleaded for a strong Europe. Germany would work on strengthening it during its Presidency of the Council of the European Union which starts on July 1st, 2020. She said it had been necessary to resume borders controls within the E.U. temporarily. This aspect had hurt.

As Germany started its long Pentecost weekend on Saturday, Mrs. Merkel reminded the nation to stick to the distance and hygiene rules.

Berlin: The Fight For and Against a New Department Store at ‘Hermannplatz’