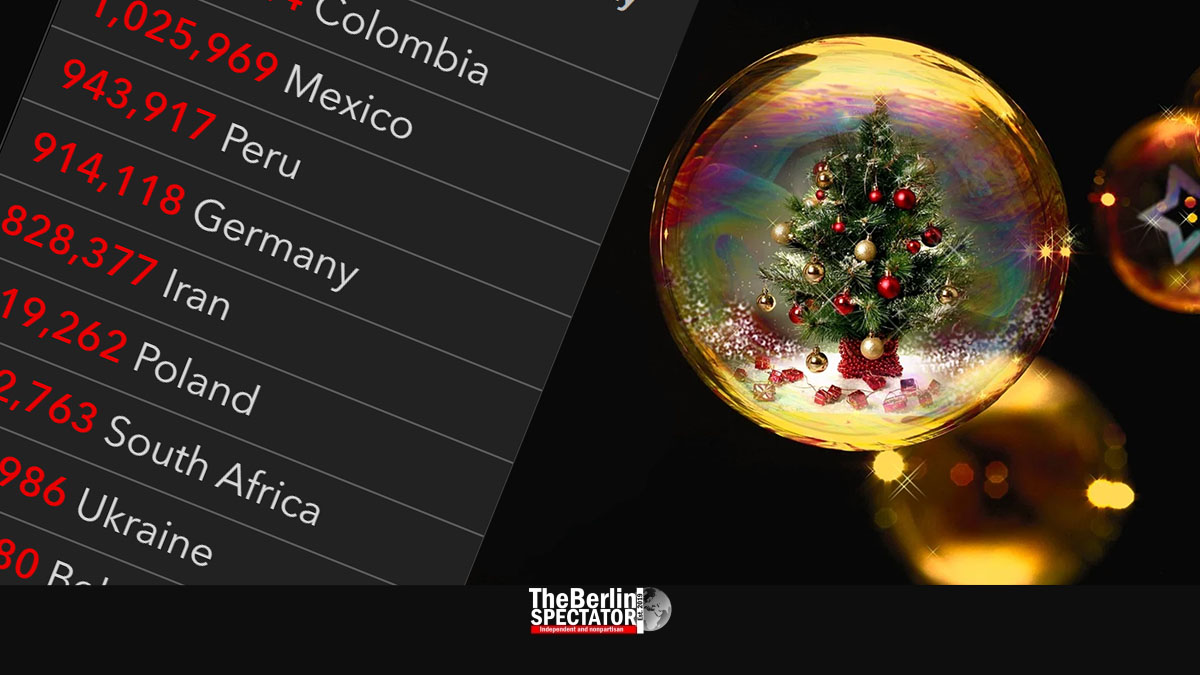 Since the ongoing partial lockdown is not pulling the infection numbers down so far, politicians in Berlin and elsewhere demand tighter restrictions. Those might be put in place on Wednesday. Christmas is five weeks away.

Berlin, November 21st, 2020 (The Berlin Spectator) — Yet again, the number of new Corona infections within 24 hours is high. Johns Hopkins University’s data show there were 22,593 of them. The Robert Koch Institute says there were 22,964. At the same time, Christmas is approaching fast.

Alexander Dobrindt, who heads the conservative CSU’s regional faction at the Berlin Bundestag, just demanded a substantial tightening of the existing anti-Corona measures. He told the ‘Passauer Neue Presse’ daily, in order to limit the infection numbers until Christmas, additional restrictions were necessary.

According to him, the infection situation at Germany’s schools needs to be slowed down. Dobrindt suggested they could offer a mixture between classes on site and online classes. He also said all schoolkids could be provided with ‘FFP2 masks’ which protect their users more.

In the interview, Dobrindt stated the Seven Day Incidence Number needed to be decreased to a level below 50, in order to give people the opportunity to have a “normal Christmas holiday”. For that reason, more efforts needed to be taken. Dobrindt said, otherwise the goal would be reached later, in mid-January.

The First Minister of North Rhine-Westphalia, Armin Laschet, wants stricter contact restrictions. He told the ‘Stuttgarter Zeitung’ daily, families should be allowed to meet up to two more persons from one different household. This is what he intends to suggest at the next big meeting with Chancellor Angela Merkel.

On Wednesday, she and the First Ministers are scheduled to hold their next online meeting. Last week, they postponed decisions about tightening the rules even though Mrs. Merkel had wanted to take them. For the meeting on Wednesday of next week, decisions and a preview until the beginning of next year were announced, whatever that may mean.

In an interview with the editorial pool ‘Redaktionsnetzwerk Deutschland’, Chancellery Minister Helge Braun said celebrating Christmas without grandparents was “unimaginable”. At the same time, he asked people to be careful. It was imperative to reduce the number of contacts beforehand, Braun stated.

In Berlin, the situation is worsening, including at schools. Within one day, 1,703 new Corona cases were reported. This is a record number. Now three out of twelve districts in the German capital have Seven Day Incidence Numbers higher than 300. They are ‘Neukölln’, ‘Friedrichshain-Kreuzberg’ and ‘Mitte’. Four more districts, namely ‘Steglitz-Zehlendorf’, Reinickendorf, Spandau and ‘Tempelhof-Schöneberg’, are above 200 and the remaining five are above 100. The Incidence Number for the entire city of Berlin stands at 225.7. In the German capital, 19 COVID-19 patients died within 24 hours.

Berlin’s schools reported 1,500 infected pupils and 400 infected teachers. Two hundred out of Berlin’s 700 public schools will have to switch to “hybrid classes”, a mixture of classes on site and online classes. Only 32 schools have no or few Corona problems. All others do feel the Corona pandemic. In the entire country, 300,000 pupils are in quarantine.