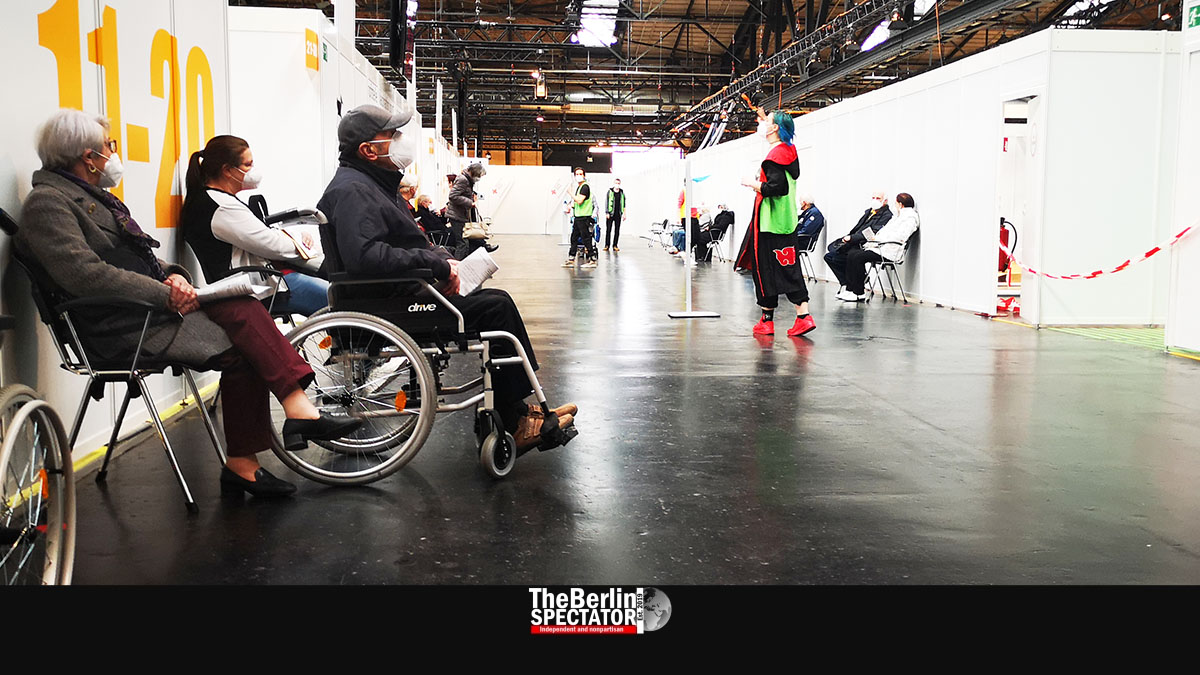 Organizing a giant vaccination campaign is an art form. It needs actors who know what they are doing and a director who streamlines the play until he achieves a goal many have failed to even come close to. This is about the perfect choreography.

Berlin, March 29th, 2021 (The Berlin Spectator) — The curtain opens for the first act. A million taxis bring mostly elderly individuals to a vaccination center in a secret city that starts with a “B” and ends with “erlin”. The cabs enter the blind lane that leads to the entrance and stand in line until it is their turn. Once it is, they turn around and stop in front of the entrances to the Corona vaccination center. At this moment, soldiers step towards the vehicles, open the doors and welcome the passengers, while a man who cannot be overlooked due to the bright yellow vest he is wearing stamps taxi vouchers. Once he does, those vouchers become valuable. It is a big business. The state pays for the transportation.

Now, the second act commences. If there was an orchestra in the pit, it would now be playing some kind of a fanfare with lots of horns, and then change to a far less dramatic, soothing melody that includes a harp and strings. This is the waiting part. Even this second act is choregraphed well. At this moment, some 50 elderly citizens with grey to white hair, who wear coats that may have been fashionable in the early 1970s, are being asked to stand in two separate waiting lines for entrances 1 and 2. Entrance 3 is reserved for individuals who use wheeled walkers. They do not even have to wait, but just enter the center.

Just two to three minutes later, the waiting lines start moving into the building. This is the place. Thousands of lives have already been saved because of this vaccination campaign. Thousands more will. Those who keep on complaining Germany did not have vaccine and was badly organized are being proven wrong at this location. Yes, just like several other E.U. countries, Germany should have more vaccine. It will soon. Once the vaccination campaign is being sped up in April, it will be even more successful and effective, as long as vaccination centers of this kind play a role.

No, the second act is not over. While the two waiting lines disappear in the building, just as many leave it through two exits. The cabs that just brought people for vaccinations now pick up those who are done and take them home. This time, the drivers get their vouchers they can later cash in from their customers, who got them inside the building. Dozens of people constantly enter the place while others exit it. It is like an opera play. Except there is no unnerving screaming. Hey! This is not Verdi’s ‘La Traviata’, but a vaccination campaign.

Once the vaccination candidates are inside, they show their I.D. cards and invitations to very kind soldiers. Germany’s armed forces, the Bundeswehr, either chose the kindest ones they had, or they briefed them well, about how to treat elderly people some of whom might be insecure or afraid. It is probably both. Making people feel good is the art form in this third act. Once the paper work has been taken care of, one of those seventy kind soldiers who work here sends people to the next helper, a lady in a yellow vest. She is obviously one of the choreographers here.

It is her job to send people to chairs lined up alongside two walls in a huge corridor. Nobody will catch the virus here, hopefully, also because there are wide gaps between those chairs. At this vaccination center, nobody will run into anyone else. There is a lot of room. And there are helpers who make sure the aisles are vacant, so that people can walk through without tripping.

Now the orchestra, if there was one, would prepare the audiences for some action, with a more dramatic, partially disharmonic theme which would have increased the suspense. Each vaccination candidate will be sent into a box with a window. On the other side of it, a persons asks big questions: “Is this your first or second vaccination?” Good one. “How did you tolerate the first vaccination? Did you experience any side effects?” The man behind the window does some more paperwork, before he sends people off towards another kind lady. She wears a green vest and leads the way to another box, which turns out to be a full-blown doctor’s office. This is obviously the beginning of the fourth act.

The doc in charge in this box is a very friendly expert for nuclear medicine from the Erzgebirge (‘Ore Mountains’) in Germany’s east. His expertise in that complicated field of his is not needed here. But he wants to help vaccinating people anyway, as a simple doctor. He says he would even do the night shift if there was one. The friendly doctor likes to chat with people. Once the shot was administered to a 79-year-old lady, he sends her to the monitoring location. For 15 minutes, those who just got their shots are supposed to sit down, relax and have a cup of water. Yes, this is already the fifth act.

In a giant seating area, a young man who is just as kind as absolutely everyone else in this vaccination center pushes a tea trolley with lots of plastic cups and water bottles from chair to chair. “Are you well? Do you want some water?” His colleague at the exit door gives him signals with his fingers. That way he will know how many persons are standing in the two waiting lines for taxis at this moment. Once there is room, he kicks people out of the vaccination center. Actually, he tells them they may now leave if they are ready. Waiting for the cab in the final act of this well-choreographed theater play takes a few minutes. People with walking aids get large taxis, while the others squeeze themselves into those Toyota Prius and Mercedes E-Class cabs.

That’s it. The curtain closes, and the audience is impressed with the way this big endeavor is being organized. Things did not always run as smoothly as they do now. When this secret vaccination center in the secret city that starts with a “B” was opened in December, absolutely nothing happened here. Hardly anyone came to get vaccinated. Then, a few weeks ago, it was the exact opposite. The place was crammed. Those taxis that were supposed to make sure people got there on time for their vaccination appointments were up to one hour late, since they were stuck in terrible traffic jams. By now, all issues have been resolved. The Senate Health Administration and everyone involved should be awarded prizes.