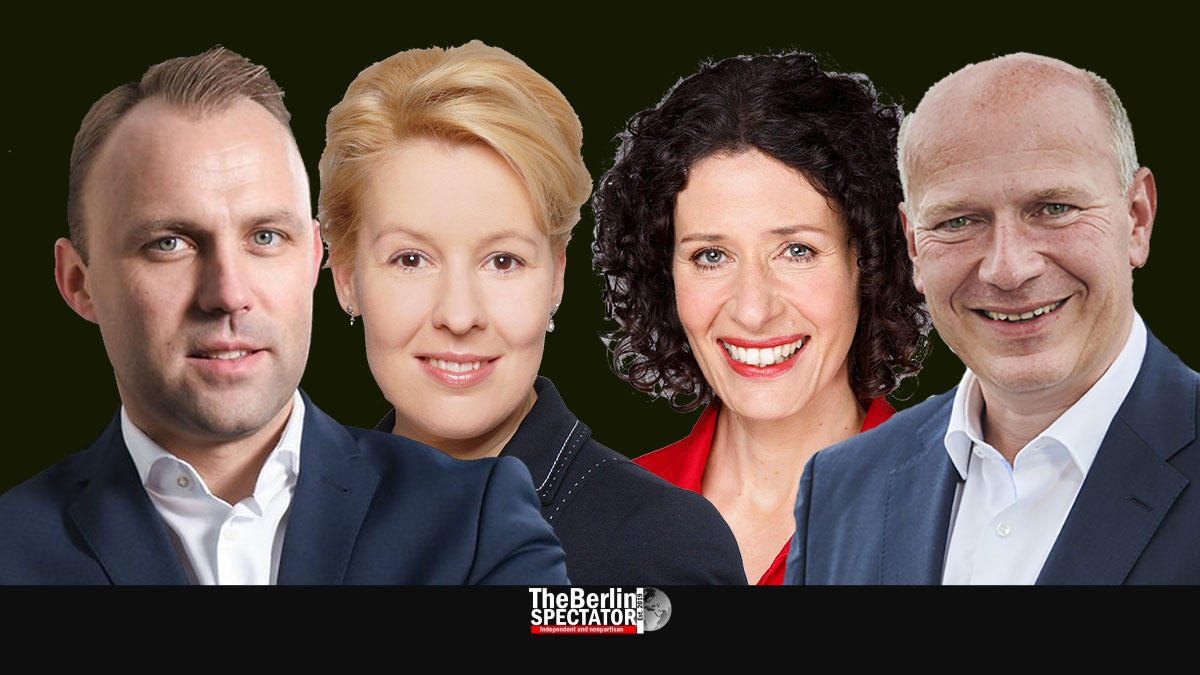 In the city state of Berlin, the carrousel of candidates is turning as the next elections for the Berlin House of Representatives are coming closer. Everyone wants to govern Berlin, even though it is definitely not easy.

Berlin, October 6th, 2020. Update: March 28th, 2021 (The Berlin Spectator) — Later this year, Germans will be voting until their fingers hurt from marking their favorite candidates on a gazillion ballots. There will be elections in as many four more federal states and general elections for the Bundestag. On top of it all, some local elections will take place. State elections in Baden-Württemberg and Rhineland-Palatinate already took place.

Berliners will make their choices in regard to the district assemblies, they will vote for old and new members of the House of Representatives and for the Bundestag, all at once. In the capital, all elections that could take place are coming up. The wind of change is blowing in the German capital.

Whatever happens, Berlin will have a new Governing Mayor in 2021. The city might even replace its center-left Senate coalition into a conservative-green or a green-conservative one. On the other hand, it might not. What will the Berlin Senate look like in late 2021? Nobody can really tell.

If the election for the Berlin House of Representatives was a beauty contest, all candidates would win. But it isn’t. Two parties have the best chances to conquer Red City Hall, according to the latest polls. The center-left Greens and the conservative CDU are taking turns at the top of the list of the strongest parties in the city state.

In fall, the Greens just announced Bettina Jarasch would be their main candidate in 2021. This comes as a surprise. Pretty much everyone had expected Commerce Senator Ramona Pop and the Green floor leader at the House, Antje Kapek, or one of them, to run.

But Bettina Jarasch is no stranger. From 2011 to 2016, she headed the Berlin Greens. Since 2016, she has been a member of the House of Representatives. And she is part of the ‘realist’ wing in her party, which makes her electable for more Berliners than she would have been as a Green ‘fundamentalist’.

The way things look right now, Bettina Jarasch might very well become the first female Governing Mayor has had since Louise Schröder held the office provisionally from 1947 to 1948. That is because the balance of power to the left of the political center has changed. The Greens are a lot stronger than the two parties they are governing Berlin with right now, namely the center-left SPD and the far-left ‘Die Linke’ (‘The Left’).

The conservative CDU, the Berlin division of Chancellor Angela Merkel’s party, is a strong contender, but one with issues. First of all, there is no conservative majority in the city state of Berlin. That is why the CDU is already trying to flirt with the Greens.

Secondly, they could have an issue with female voters because their gender is not exactly being promoted in the party. The Berlin CDU’s Monika Grütters, a popular and gifted politician with a lot of experience, had to take over as her party’s chairlady in 2016, when things did not look too good. As soon as the numbers improved in 2019, she had to make room for Kai Wegner, a local matador.

Years ago, Wegner was known as an uncompromising ‘law and order guy’. Ahead of next year’s elections, he is changing his image, by adapting to modern ways of looking at transport policy and by having an open dialogue with the Greens, a party his colleagues at the House of Representatives and certain local media keep on slamming on a daily basis. The law and order approach is difficult, because the SPD’s Interior Senator Andreas Geisel is doing a good job here already.

Wegner’s CDU wants to look modern. For that purpose, it recently started a new advertising campaign that was supposed to be “as naughty as Berlin”. The plan backfired when an ad about commuters used slippery word games most of which work in German only. It was something about “in and out without fun” that did not go down too well in the emancipated city. While its creators at the advertising agency in charge must have laughed their butts off, critics did not. So, the sexualized ad disappeared.

Berlin’s Social Democrats (SPD) have much bigger problems than the CDU. As things stand right now, they will lose Red City Hall. Their Governing Mayor Michael Müller was ousted at a party convention in 2020. He wants to continue until the elections and become an MP at the Bundestag in fall.

Müller is a hard worker. He might not be the born self-promoter though. This is a weakness, but also something that makes him more likable to some. But the SPD keeps on drowning. According to polls, it is at its lowest point since the Federal Republic of Germany was founded in 1949. This applies in Berlin and on the federal level.

Today’s federal Family Minister Franziska Giffey is supposed to be Müller’s successor. With Raed Saleh, the SPD’s floor leader at the House, she wants to change course. Giffey is a favored politician and she is not new to Berlin, but she does have an issue with an alleged dissertation scandal she cannot get rid of.

On the other hand, she is an extrovert, as opposed to Müller. And she qualified for local Berlin politics years ago, when she was a councilwoman and district mayor in the difficult Neukölln district for several years. In 2018, duty called elsewhere in Berlin, when they wanted her for the Family Ministry. Her experience in federal politics will not hurt her in Berlin, but she will have to defeat both the Greens and the CDU if she wants to become Governing Mayor.

The Star with the Earring

The left-wing ‘Die Linke’ intends to send Culture Senator Klaus Lederer into the 2021 race. Something would be wrong there if they did not, because Lederer is one of the most popular politicians in the city. During the ongoing Corona pandemic, he has been a convincing crisis manager from the perspective of many. The fact that the man with the 1980s earring has angered far-left-wingers in his own party does not seem to hurt him at all.

For the liberal FDP, Sebastian Czaja was the main candidate last time around. The party’s floor leader at the House of Representatives wants to do it again in 2021. He was confirmed just yesterday. The FDP’s recent campaign against the closure of Berlin’s Tegel Airport was dumped. Czaja intends to concentrate on the economy. For instance by calling for an improvement of climate-friendly investments, in order to seem greener in the pretty green city of Berlin.

For the extremist right-wing AfD, Georg Pazderski might become the main candidate, or the new chairlady Kristin Brinker. The AfD’s goal is to co-govern Berlin. This should be rather difficult because none of the other parties are ready to even talk to the right-wing radicals who are now being investigated by the Federal Office for the Protection of the Constitution.