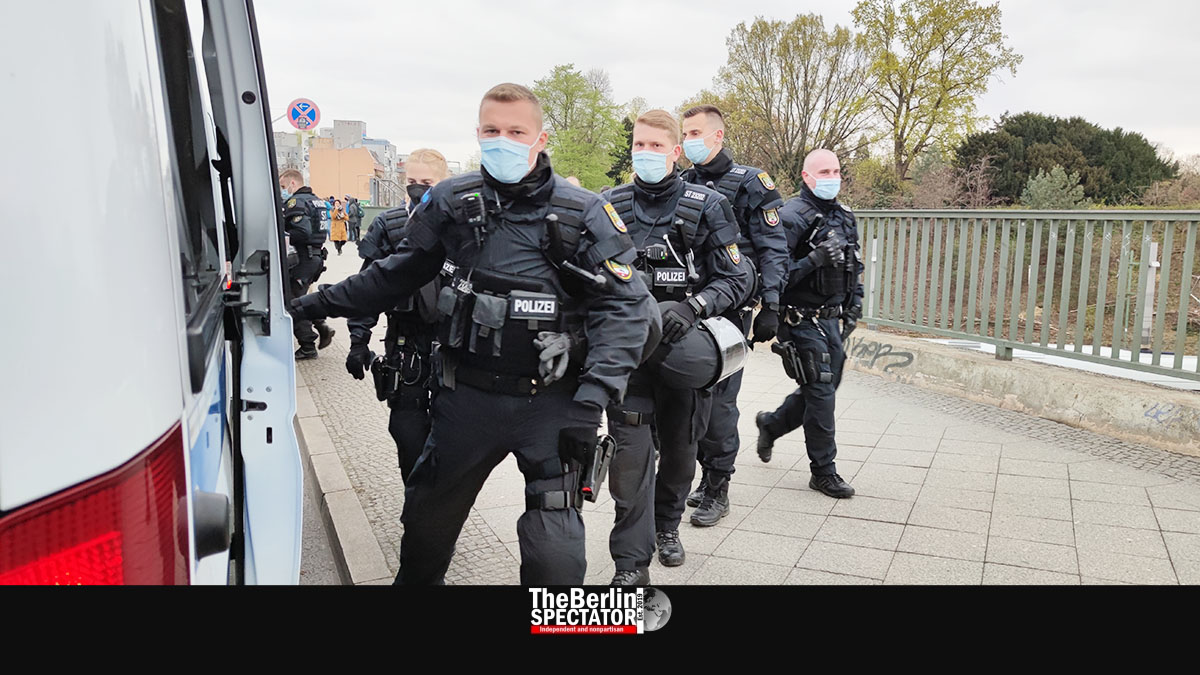 In Berlin, 5,500 police officers from a total of nine federal states are on duty today. That is because dozens of Labor Day protests were registered. Most of them will be peaceful, but the ‘Revolutionary May 1st Protest’ might not.

Berlin, May 1st, 2021 (The Berlin Spectator) — The Berlin Police Department rented several hotels in the city, in order to accommodate hundreds of police officers from other federal states who are badly needed in the German capital today. That is because some of the Labor Day protests organized by the radical left, including the ‘Revolutionary May 1st Protest’, may very well turn violent. A police overkill is necessary.

Against “Patriarchy and Capitalism”

Dozens of protests were registered for today, but the first ones actually took place on Friday. In Berlin’s Wedding borough, officers from Saxony-Anhalt and Germany’s Federal Police helped the Berlin Police Department cope with a large rally the 1,500 participants of which demanded action against Berlin’s affordable housing crisis, including dispossessions of large real estate companies. Two people were arrested temporarily. Other than that, this protest was peaceful.

In the late evening, feminists took to the streets in the German capital’s Friedrichshain-Kreuzberg district. During their protest “against patriarchy and capitalism” that was entitled “Take Back the Night”, some participants lit fireworks illegally. The police ordered the 2,000 protesters to stop the use of pyrotechnical items. When bottles, stones and eggs were thrown at the officers, the rally was ended. From a helicopter, the police also observed the events unfold from above.

All of this was only the beginning of a very busy weekend in a complicated situation. It is already the second Labor Day in the Corona crisis. In 2020, up to 20 persons were allowed to gather. Back then, the police successfully kept several groups of protesters apart. Now, the rules are different. There is a nightly curfew, but it does not apply to protesters, and the number of participants is not limited. But, of course, there are distance and mask rules everyone has to adhere to.

Ahead of the big day, Berlin’s Police Chief Barbara Slowik had said her colleagues would act consistently. In case the Corona rules are not being followed, they have orders to end protests quickly and disperse the crowds. They would even use water cannons if necessary, Mrs. Slowik stated. She also thanked all officers for their efforts in advance and said she hoped they would be safe and sound at the end of the day.

But this is not the approach the police want to take. They have de-escalation teams in place too. As long as everything can be resolved with communication, the water guns will not be used. Berlin’s prosecution is prepared as well. Several prosecutors will be on standby today, just in case they have to sign arrest warrants. As many as 5,500 police officers from nine federal states, including the city state of Berlin itself, are preparing for this difficult day right now.

Apart from some more dangerous protests, including one that will be staged by Corona deniers and the “revolutionary” one organized by left-wing extremists, there are several rallies which will most likely be peaceful, including traditional Labor Day demonstrations for worker’s rights. But the police are needed at those events as well. For instance, they have to reroute traffic and protect the participants.