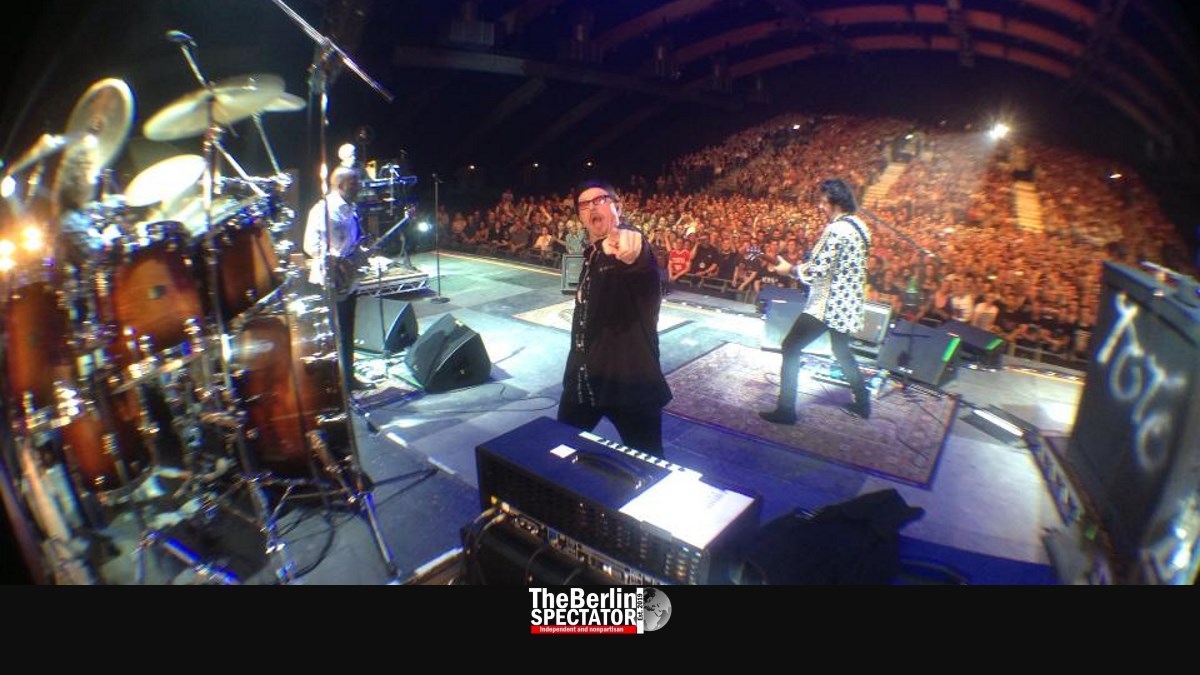 One of the greatest Rock bands on the planet, Toto, survived many decades. They are still strong. And they will be performing all over Europe, including in Germany, Austria and Switzerland.

Berlin, November 21st, 2020. Update: May 15th, 2021 (The Berlin Spectator) — It’s hard to believe today, but in the era of what they called Adult-Oriented Rock, or AOR, in the late 1970-s and early 80-s, quality actually counted. ‘Real music’ enthusiasts did not care much about pretty faces or big breasts. They wanted the killer sound, the compositions, the arrangements and the ‘feel’.

In 1978, Toto’s self-titeled debut album was released. “What in the hell is Toto?” people might have asked themselves. But the minute they played that piece of art on their record players, they knew Toto equaled perfection. The band delivered AOR at its very best, even though the AOR era had only just begun.

Those who listened more closely would discover that hardly any band before Toto ever sounded as clean as they did. Also there was a Funk influence. While most Rock bands at the time rejected that kind of approach and sounded dry as a result, Toto were open-minded, innovative, progressive. In short: They nailed it.

The ‘Toto’ album includes their smash hit ‘Hold the Line’, a dance floor filler. ‘You are the Flower’ is a very sophisticated AOR piece. With ‘Georgy Porgy’, they covered the funky side of things with vocalist Cheryl Lynn. This tune became an AOR and Funk hymn.

Another extraordinary track is part of that first album: ‘Takin’ It Back’. Those synths, the surprises the tune contains regarding its arrangement, and the entire composition are nothing less than sensational. Steve Porcaro, an original member who is still their keyboarder today, composed this one when he was only 20 years old.

There were some things many other bands did not have, but Toto did, including this level of genius. Nobody else featured vocalists like Bobby Kimball either. On top of it all, there was Jeff Porcaro who revolutionized Rock drumming.

Toto’s second album, ‘Hydra’, was more than excellent too, but somehow different. They took a more mystical approach, like Genesis or Yes. But this aspect did not stop them from delivering brilliant AOR tunes as well, in 1979.

In 1982, something big happened: Toto’s fourth studio album ‘IV’ made landfall. This one made them global superstars. On ‘IV’, the most brilliant ‘AORish’ tune is ‘Waiting for Your Love’, but it was ‘Africa’ radio stations all over the Western world could not get enough of. That one was played every five minutes. ‘Rosanna’ was another huge hit.

Over time, Toto had more successes. From a 1970-s AOR point of view, many of their newer compositions were different, again. Some of them sounded as if they were made to please formatted radio stations. But their huge fan base all over the world, especially in North America, Europe and Japan, always was, and still is, with them.

Toto members also played with — and produced albums for — other artists, most notably Boz Scaggs. Toto’s unique blend can be identified in quite a few stunning songs of his.

On August 5th, 1992, tragedy struck. After spraying his garden with insecticides, Jeff Porcaro, the genius drummer and Steve’s brother, collapsed. He died at a hospital that day. The band and the world were shocked. He was only 38.

Apart from Steve Porcaro, the original members David Paich and Steve Lukather are still with Toto today. The band of bands is very active, and they are returning to Germany. On July 14th, 2022, they will be performing in Bonn. On the 16th, it is Halle’s turn. More Toto gigs are scheduled in Tüssling on July 20th, 2022, in Schwetzingen on the 28th and in the Austrian city of Graz on July 29th, 2022.

It gets better: They will also put on their stunning shows in Amsterdam (July 15th, 2022), in Pratteln, some spot in Switzerland (July 19th), Middelkerke, Belgium (July 21st, 2022), Vitrolles, France, Warsaw, the Swedish towns of Helsingborg and Gothenburg as well as in Copenhagen and Viborg in Denmark. Because of the damned Corona pandemic, those European gigs had to be postponed several times.

More information is available on Toto’s website. Tickets for the German gigs can be purchased here.