Berlin: Ukrainian Refugees Apply for Residence Permits by the Thousands 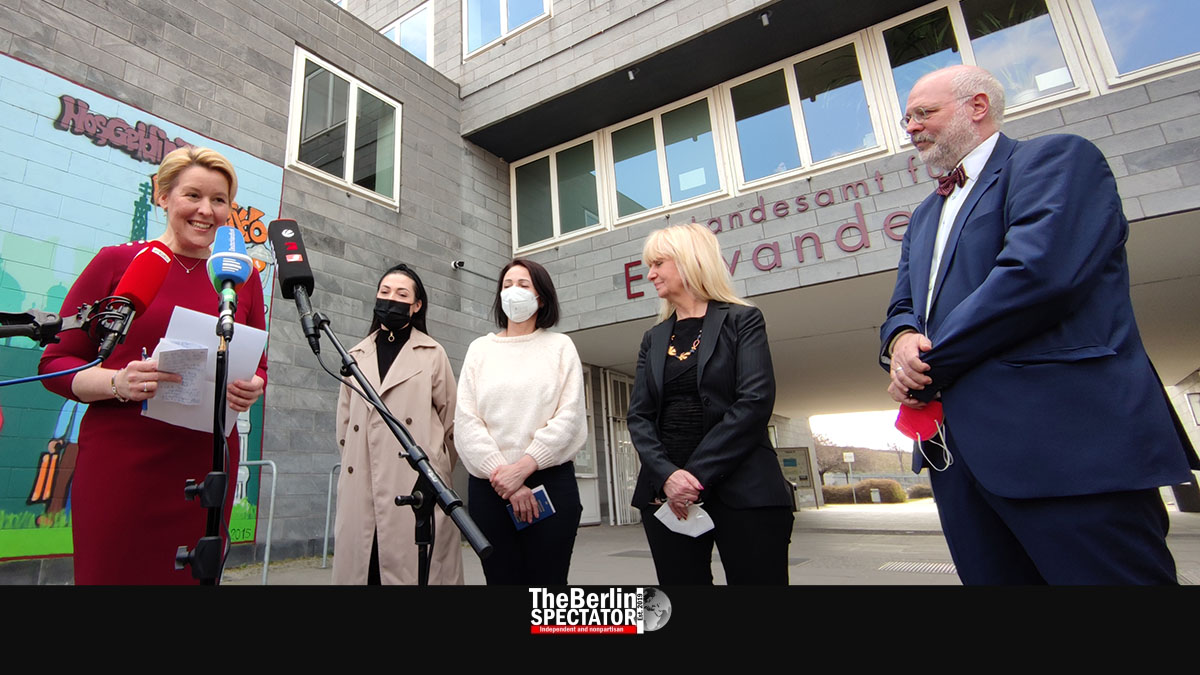 Berlin’s Governing Mayor Franziska Giffey is very active. She appears everywhere in the city all the time to get a clear picture of processes, issues or situations. This time, she visited the State Office for Immigration, where she received interesting numbers about war refugees who came to Berlin.

Berlin, March 26th, 2022 (The Berlin Spectator) — There are ‘Foreigner’s Registration Offices’ in all parts Germany. Berlin calls its equivalent State Office for Immigration (LEA is the abbreviation for ‘Landesamt für Einwanderung’). According to Governing Mayor Franziska Giffey, the name says it all. “This is about supporting people while they immigrate, about seeing how their integration and their stay can be successful”, she stated in front of the authority at Friedrich-Krause Ufer, right next to the Berlin Spandau Shipping Canal.

The State Office of Immigration is busy. In the past seven days, 11,000 war refugees from Ukraine handed in applications for residence permits. Mrs. Giffey said some 2,000 applications had come in every day. She expects that there will be many more, namely up to 100,000 in the coming days and weeks. Ukrainian refugees who are being accommodated by the state will be registered at refugee welcome centers. The authority, LEA, is the place to go to for refugees who live with Berliners, in their private homes, or with friends or relatives who already lived in Berlin when Russia attacked Ukraine.

Now, because the authority is so busy with refugees from Ukraine it is employing more people. So far, it has managed to process 1,100 of the 10,000 applications. Franziska Giffey said more measures would be taken to make sure there would not be long waiting lines. She said an online application for Ukrainians was already available. (Follow this link. The site includes explanaitions in Ukrainian and Russian.) Once they were processed, the applicants would be invited to come to LEA, for appointments.

The Governing Mayor accompanied a Ukrainian lady whose daughter already lived here, to experience one of those appointments herself. According to Franziska Giffey, the State Office grants residence permits for two years because it does not want to go through the effort of prolonging permits for thousands of people in six months or a year from now. The authority believes one in two Ukrainian refugees who hand in applications will live in Berlin for good, or for a long time.

Engelhard Mazanke, LEA’s director, said Berlin was confronted with “enormous challenges”, but also “new opportunities”. He said the Ukrainians who applied mostly had two questions. They wanted to know where they could find German language courses and jobs. Mazanke stated Berlin needed the new arrivals and welcomed them. He was referring to skilled professionals who are in high demand.

Berlin’s Interior Senator Iris Spranger, who came to LEA with the Mayor, said most refugees had biometric, forgery-proof passports. According to the Federal Police only 2 percent of all new arrivals from Ukraine do not have passports. Obviously most war refugees who come to Germany are women and children. Out of the 1,100 applications that have been processed so far, only 30 to 40 were handed in by men. But Berlin expects that tens of thousands of men might follow their families to Germany soon.