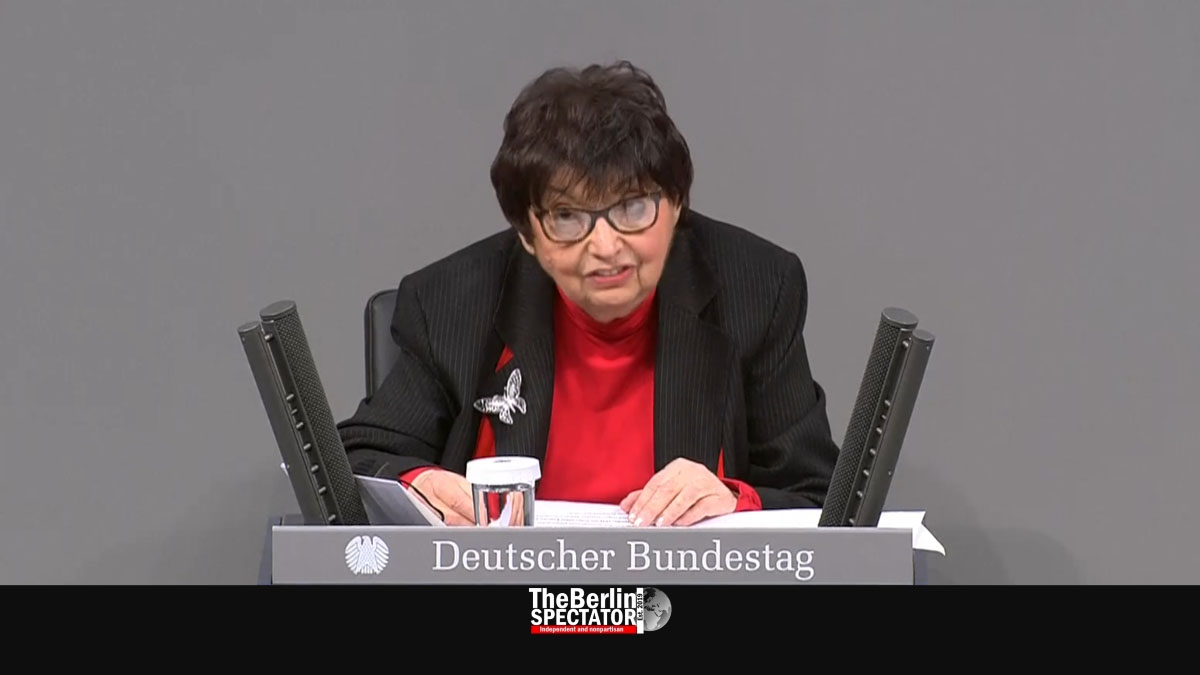 The Berlin Bundestag observed the International Day of Commemoration in Memory of the Victims of the Holocaust on Thursday. Inge Auerbacher, a survivor, told the MPs about her deportation to Theresienstadt.

Berlin, January 27th, 2022. Update: 1:10 p.m. CET (The Berlin Spectator) — On the 77th anniversary of the liberation of Nazi Germany’s death camp in Auschwitz, the Bundestag commemorated the millions of Jewish and other victims of the Holocaust. In her speech, the parliament’s President Bärbel Bas mentioned the Wannsee Conference that took place in Berlin eighty years and seven days ago. At this meeting of 15 Nazi soldiers and officials, the state-sponsored mass murder was organized and accelerated.

Bärbel Bas said the event at Wannsee, a large lake in the German capital, stood for a state in which injustice had become justice, a state which had planned and organized crimes, a state which had been borne by people who had become murderers and accomplices. “For this reason, today is a day of shame for the things earlier generations of Germans did”, Mrs. Bas stated. The culprits had never shown any shame. Too few of them had stood trial.

The 87-year-old Holocaust survivor Inge Auerbacher, an American citizen who grew up in the south of Germany, spoke to the MPs. In 1942, the Nazis deported her to the Theresienstadt ghetto. Her family survived and moved to the United States in 1946. “I am a Jewish girl from the village of Kippenheim in the Baden region” she said. There, Jews and Christians had gotten along very well.

Inge Auerbacher, who was born on December 31st, 1934, and lives in New York today, said she had been the last Jewish child who had been born in Kippenheim. Her grandmother had been murdered by the Nazis and buried in a mass grave in a forest near Riga. Nineteen more members of her family had been killed too. Mrs. Auerbacher told the members of the Bundestag she had not even been four years old when she had lived through the Night of Broken Glass. Afterwards, all men and boys from 16 years of age had been taken to concentration camps.

In Jebenhausen, another village, which is part of the town of Göppingen today, she and her family lived with her grandparents for a while, when the family tried to leave Nazi Germany. Inge Auerbacher said more and more antisemitic restrictions and regulations had been put in place back then, and the opportunity for fleeing the country had faded. Even though non-Jewish Germans were not allowed to be in contact with Jews anymore, most children had continued playing with her.

‘Jew-Hatred is a Daily Occurrence’

She also described the terrible conditions under which the family lived in Theresienstadt after its members were deported to the concentration camp there, in August of 1942. Life there had been very hard for a child, she said. It had all been about finding something to eat, on a stinking trash dump kids had been forced to use as a playground. Her small family survived, but most others, including her good friend Ruth and her family, were taken to Auschwitz and murdered.

“I have lived in New York for 75 years, but I remember”, Inge Auerbacher said. Today, Jew-hatred was a daily occurrence again in many countries, including Germany. “Misanthropy is a terrible thing. We are all born as brothers and sisters. My biggest wish is the reconciliation of all people.”

Mickey Levy, the President of the Israeli Knesset, held a speech at the commemoration event as well. At the very building he was holding his speech in, humanity had extended the boundaries of evil, he stated. Back then, democracy had turned into racist savageness. The stones the Reichstag was made of were silent witnesses. Today, democracy needed to be defended at any cost.

Germany’s President Frank-Walter Steinmeier was at the Bundestag, but did not hold a speech this time. Separately, he stressed the importance of remembrance. “Those who forget what happened will also forget what can happen.”