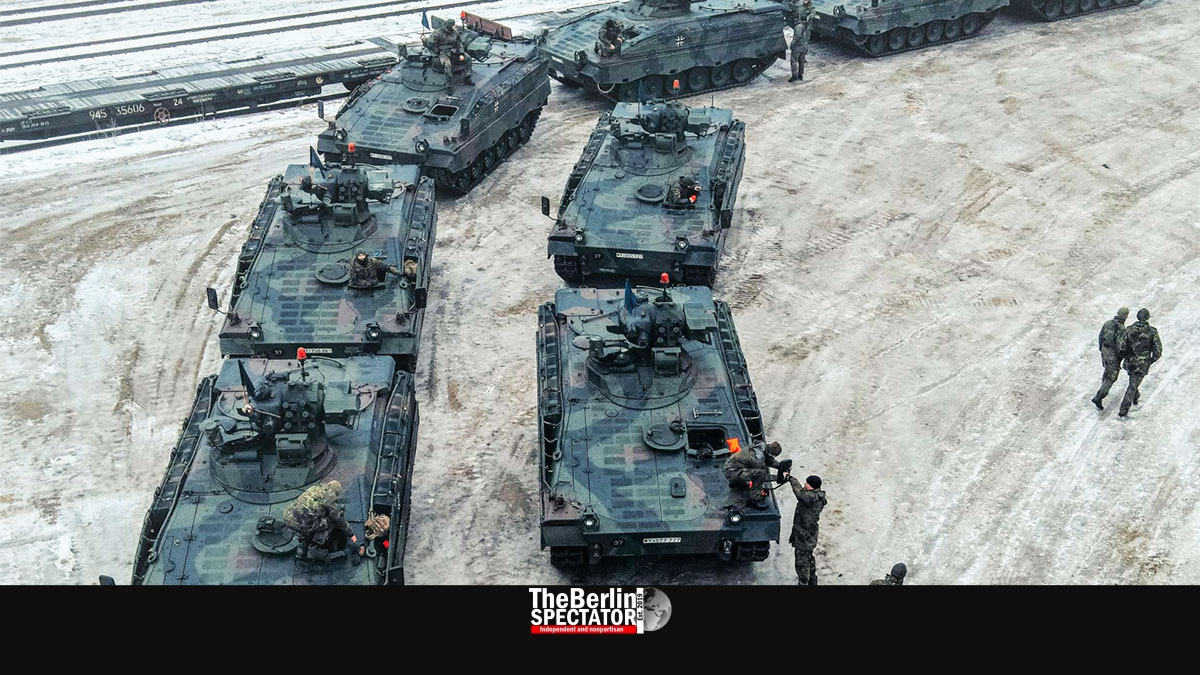 In a letter to all soldiers, Germany’s Defense Minister Christine Lambrecht said the Bundeswehr would be needed “to protect the NATO allies at the eastern flank.” She is considering to call in the reserves.

Berlin, February 25th, 2022 (The Berlin Spectator) — The Bundeswehr, Germany’s armed forces, are affected by Vladimir Putin’s war against Ukraine. According to a report by Redaktionsnetzwerk Deutschland (RND), Defense Minister Christina Lambrecht could call in the reserves soon. The publication pool reports, she had said so during a session of the Berlin Bundestag’s Defense Committee.

At this stage, the Bundeswehr has 183,000 soldiers. There are 40,000 reservists, 20,000 of whom actively take part in exercises. The Ministry of Defense is reportedly expecting to be involved in more operations in Eastern Europe, because of the situation in Ukraine. Guaranteeing perseverance is the idea behind the plans that are being discussed.

On Thursday, Minister Lambrecht prepared the troops for more operations. “The NATO alliance’s territory is threatened”, she wrote in a letter to all Bundeswehr soldiers. It was unforeseeable how far Russia’s President Putin would go with his aggression. For that reason, NATO had activated its crisis reaction plans. Christine Lambrecht said reinforcement had already been sent to Lithuania. The soldiers involved were part of NATO’s Enhanced Forward Presence (EFP).

Now, measures needed to be taken to decrease the reaction time and increase the preparedness. The goal was “to protect our allies at the eastern flank” and to preserve the integrity of NATO’s territory. “Our allies and friends at NATO are relying on us, and we will be there when they need us”, the Defense Minister wrote.

Mrs. Lambrecht said the federal government was discussing the situation with Germany’s partners. She told the soldiers they would be informed about their tasks on a regular basis. The Bundeswehr would definitely be challenged. And it would fulfill its task of defending the country and the alliance. What sounded like a war speech actually was one, because Moscow’s aggression threatens all of Europe.

On ARD television, Christine Lambrecht had called Vladimir Putin’s operation “a brutal war of aggression and a large scale invasion”. He trampled on international law. She said she was proud that Germany could rely on a “motivated and strong Bundeswehr”.