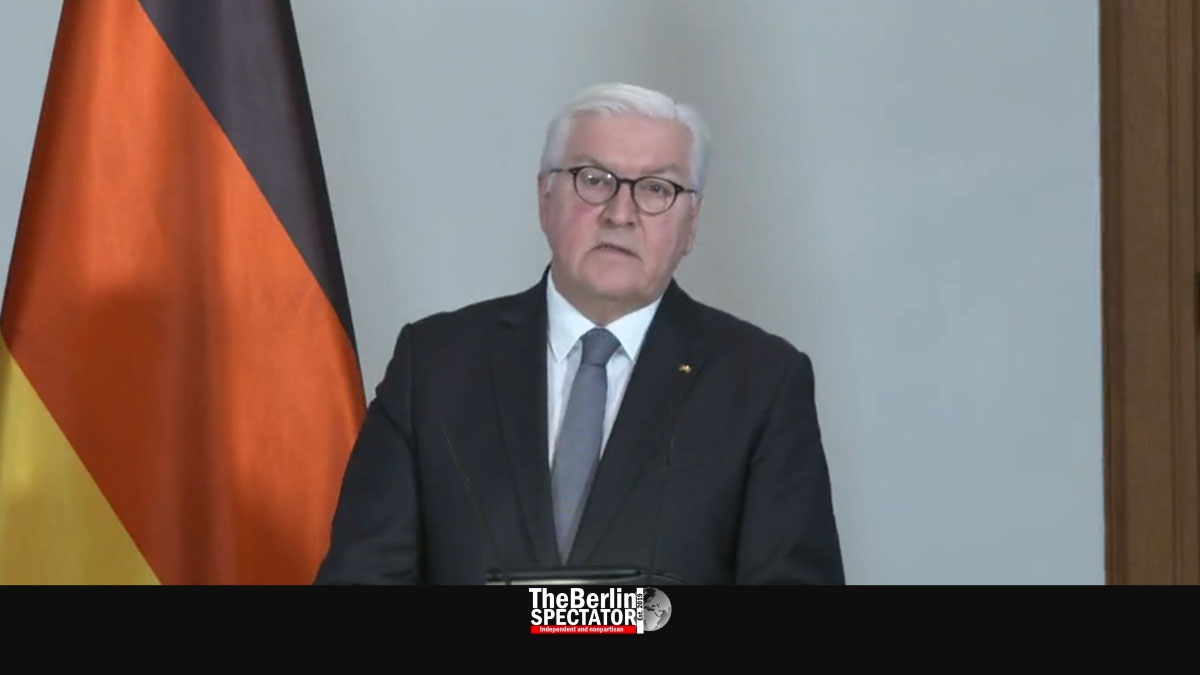 In Berlin, Frank-Walter Steinmeier addressed the nation. In a short speech on Russia’s war in Ukraine he vowed it would have consequences. Health Minister Karl Lauterbach slammed Vladimir Putin as well. So did former Chancellor Angela Merkel.

Berlin, February 25th, 2022 (The Berlin Spectator) — President Steinmeier is known for finding the right words in critical situations most of the time. Today, he did again. Steinmeier condemned “Russia’s war of aggression” which President Putin had started “with untruthful inputs”. Now there was a lot of sorrow “in our vicinity”.

Putin was “shedding the blood of a people he had recently called “sister people”. “I appeal to President Putin: Stop this madness!”, Germany’s Federal President said. “We do not want hostility with the Russian people. The opposite is the case.” But this injustice would definitely have consequences. Steinmeier announced Germany would “do its part to deter and restrain Putin from aggression against our alliance.”

“I have said it before and I will say it again: The Russian President should not underestimate the power of democracy.” Steinmeier stated it was a good thing that people in Germany protested against the war on streets and squares. Putin “should not assume we will tolerate this, not even for a moment.”

“Let us show the people in Ukraine that we do not tolerate it”, President Steinmeier stated. “And let’s show those in Russia who want peace that they are not alone. We want peace, justice and self-determination for the peoples of Europe”.

Chancellor Olaf Scholz, Foreign Minister Annalena Baerbock and other members of the German government have condemned the Russian attack numerous times. Former Chancellor Angela Merkel just did so as well. She said Russia’s offensive was “a cesura after the end of the Cold War”. There was no justification for “this breach of international law”, Mrs. Merkel stated. “I condemn it in the strongest terms.” She also said she supported the government’s, the European Union’s and the United States’ efforts to call a halt to Vladimir Putin’s war.

Even Germany’s Health Minister Karl Lauterbach condemned Russia’s war and slammed the Russian President. He said Vladimir Putin had a “narcissistic craving for recognition” which was intolerable. The world had “more important things to deal with than Putin’s major power fantasies”. He was endangering people in the middle of the Corona crisis. Professor Lauterbach said he felt very sorry for the children of Ukraine, and everyone else in the country.

Several parties and organizations in Berlin are organizing a big protest against Russia’s aggression. It is scheduled to take place on Sunday, February 27th, 2022 at 1:00 p.m. CET between Brandenburg Gate and the Victory Column.