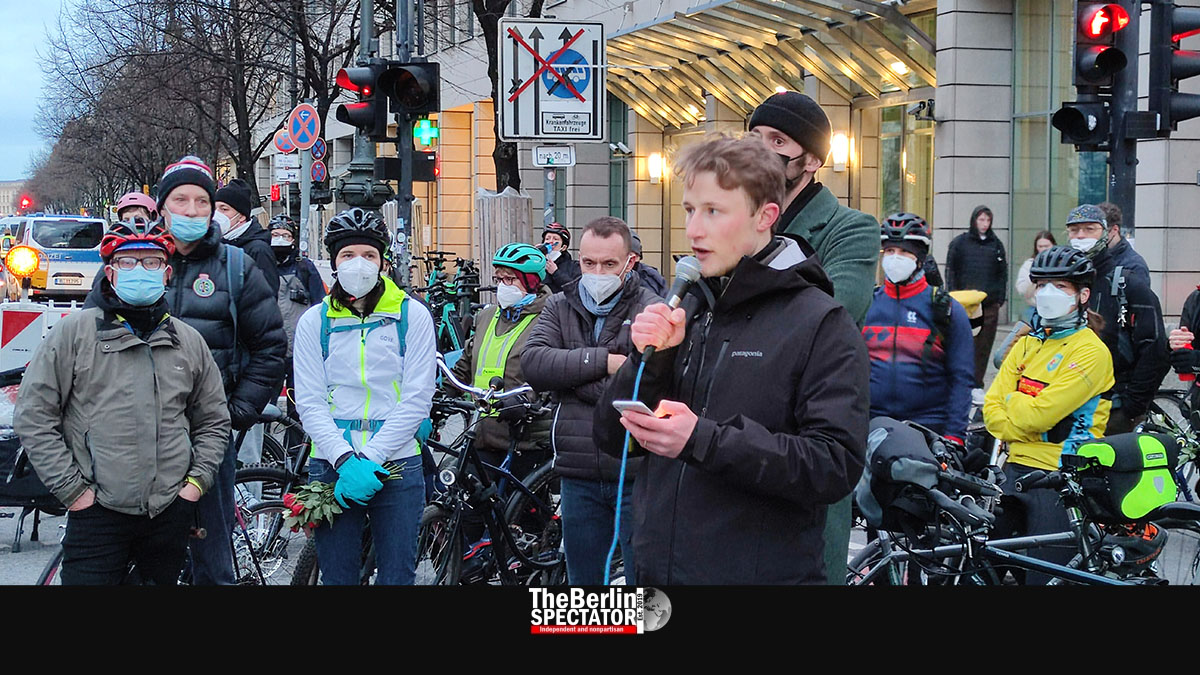 Just a few steps from Brandenburg Gate, some 80 cyclists took part in a commemoration for Christian Jäger. The 57-year-old bike messenger was hit by a car on Thursday and died shortly after.

Berlin, February 25th, 2022 (The Berlin Spectator) — When cyclists die in accidents in Berlin, two NGOs, the German Cyclists Association (ADFC) and Changing Cities, organize commemoration events for the victims at the crash sites the next day. This time, about 80 cyclists gathered at the intersection of Unter den Linden boulevard and Wilhelmstraße. The location is right next to the British Embassy, and around the corner from the American, French and Russian ones. Brandenburg Gate is in sight as well.

Representatives of the two NGOs placed a white bicycle on the street, in memory of the victim. The bike will stay at the location for a year. That way, people who drive, ride or walk by will know or remember what happened at this spot. Before the participants observed a minute of silence for Christian Jäger, Paul Jäde of Changing Cities held a speech. This was when the commemoration turned into a protest, at least in part.

He said moving around safely in Berlin was not possible for those who did not want to sit “in a cold metal box” to get from one place to the next, or for those who would rather feel the freedom of a bicycle than moving around in a protective cage. Paul Jäde said as a bike messenger and a former road racer, Christian Jäger had been an experienced cyclist who had adhered to the rules. But his experience, his routine and his skills had not prevented his death in an accident.

This was the case because traffic participants who were no danger to others were still disadvantaged and because their protection from those who threatened their lives was insufficient. “How many cyclists and pedestrians have to be killed until those in charge fulfill their task of protecting cyclists?” Obviously, Paul Jäde asked a rhetorical question here.

Colleagues who worked with Christian Jäger spoke at the event as well. One lady said he had been a good and cheerful person. As a professional road racer for the GDR, he had even been in Canada in the 1980s. After Germany’s reunification, Christian Jäger had become a bike messenger. His death was a big loss. Another colleague said the victim had always been in a good mood and had brought people together. Tears were shed at the event.

On Thursday, Christian Jäger wanted to take a left turn into Unter den Linden from Wilhelmstrasse. At the intersection, he was hit by a 3-series BMW. According to the police, the driver may have had a medical condition and lost control for that reason. After hitting the cyclist, he crashed into a pole that is part of the protective infrastructure for the British Embassy. He and a police officer were injured in the crash. The victim was revitalized by medics, but died a bit later at the hospital.