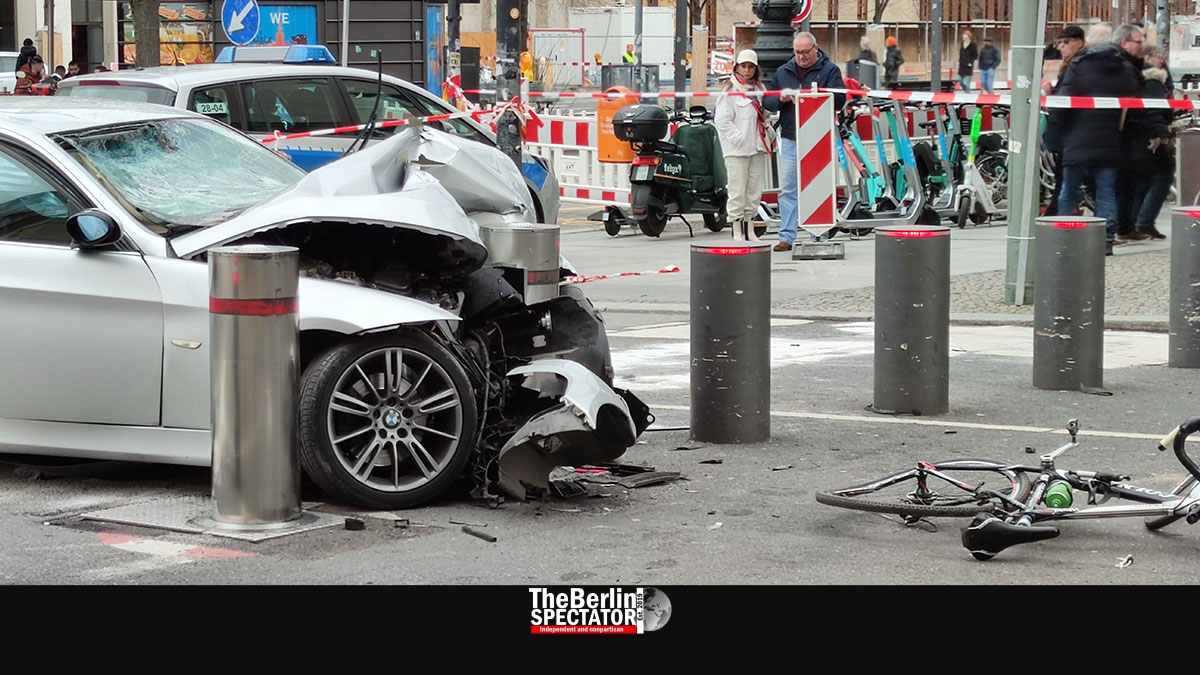 In Berlin, a cyclist died today shortly after he was hit by a car in front of the British Embassy. The 57-year-old man is the second cyclist who lost his life on the streets of Berlin this year.

Berlin, February 24th, 2022 (The Berlin Spectator) — A deadly accident happed at Unter den Linden today, the boulevard that connects Brandenburg Gate to Berlin Cathedral. A motorist seems to have lost control of his vehicle. As a result, he hit a cyclist and crashed into a bollard afterwards. It happened outside the British Embassy.

According to the Berlin Police Department, the driver of the 27-year-old BMW and the 57-year-old cyclist both intended to take a left turn onto Unter den Linden. They had both been on Wilhelmstrasse, on which they moved towards the south. Because of a medical emergency the motorist experienced, he caused the accident. The investigation is ongoing.

In the crash, the cyclist was injured so badly he had to be revived by medics who rushed to the scene. But shortly after, at the hospital he was taken to, he died. The driver of the BMW suffered bad leg injuries when he crashed into the bollard. A police officer who guarded the British Embassy was injured as well. She is being treated at a hospital.

Judging from the damage of the BMW, the driver must have hit the bollard at high speed (see photo at top of page). The car’s airbags deployed. In the early afternoon, the bicycle the dead person had ridden was still lying there, on the street. Police officers cordoned off the crash scene. Unter den Linden, the boulevard, was blocked to motorized traffic for an hour right after the crash took place.

Some two weeks ago, on February 9th, an 81-year-old woman died when she was hit by a truck in Berlin’s Dahlem borough. Sadly, she became the first cyclist who died on the streets of Berlin this year. In 2021, ten cyclists lost their lives in accidents in the German capital.

Several of the victims were killed by trucks in right-turn accidents. In some of these cases, truck drivers do not see the cyclists in their rear view mirrors. They take sudden right turns and knock them down. New trucks have sensors that can prevent this kind of accident, most old ones do not. But, obviously, today’s deadly crash was different.