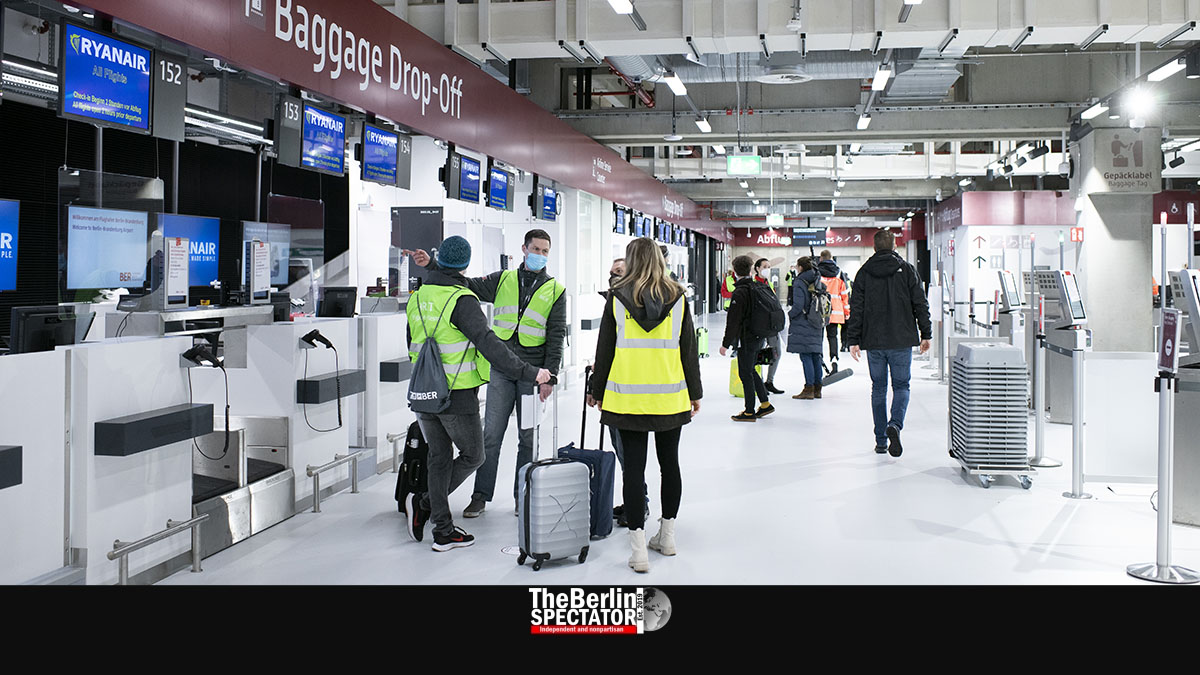 In Oktober of 2020, the region’s sleek and elegant BER Airport was opened. Because of Corona, nobody really needed a large new airport at the time, which is why Terminal 2 has not been used. This is supposed to change on March 24th, 2022.

Berlin, March 10th, 2022 (The Berlin Spectator) — The year 2020 could have been a great one for aviation in the Berlin Brandenburg region. The idea was to replace both Tegel and Schönefeld Airport because the passenger numbers were soaring and needed more room. Besides, having two airports in the region, the one in Tegel which was part of former West Berlin and the pride of the former GDR in Schönefeld, did not make too much sense.

Once BER Airport was completed with a slight delay of nine years after a nearly endless series of serious problems, hardly anyone was flying thanks to Corona, meaning BER was not really needed. They opened it anyway, but Terminal 2 remained locked. Even Terminal 5, which actually is former Schönefeld Airport’s old terminal, was closed and turned into a Corona vaccination center because immunizations had become more important than business trips to London or vacations on Spanish islands.

Now, the passenger numbers are still disappointing. In January of 2022, only 768,000 of them were counted at BER. So were only 9,100 flight movements. Even in December of 2021, there had been more. Just before Corona hit Europe, in January of 2020, 2.25 million passengers were registered in Tegel and Schönefeld, three times as many as in January of 2022.

In spite of the bad numbers, Terminal 2 will be opened on March 24th, 2022. A day earlier, a small inauguration is supposed to take place. A spokeslady for BER Airport told The Berlin Spectator she was not at liberty to say who was going to take part. One or more high-ranking government officials might be part of the small ceremony. BER Airport and the company that runs it have three owners. They are the federal states of Berlin and Brandenburg as well as the Federal Republic of Germany. Because of the losses caused by the Corona pandemic, they are pumping billions into the new airport.

The Irish carrier Ryanair will be the main user of Terminal 2. It will also have the right to let the first flight leave from there. Passengers were asked to look at the information about Terminal 2 available on BER Airport’s website ahead of time. That way they will not get lost on the way. The train station ‘BER Airport Terminal 1+2’ is located below both new terminals, which are connected to each other too, via two bridges. The same parking garages are used for both Terminal 1 and 2.

More articles about BER Airport? We have tons of them. Here they are.

We have a favor to ask: As of March 10th, 2022, at 4:14 p.m. CET, fifteen readers are supporting The Berlin Spectator on a monthly basis. In recent days, we also got one-time donations from some readers. We appreciate everybody’s help a lot. Thank you so much! You know who you are.
But, The Berlin Spectator needs more supporters. Right now, we receive a low three-digit amount per month. The first digit is a 2. In order to make this a more stable project, the amount would have to be quintupled, at least.
This is the obvious question to you: Would you consider supporting The Berlin Spectator?
Even small donations help. You can choose between one-time contributions and monthly ones. And you have the choice between Paypal and Patreon. You can check out our Donations Page first if you want to. Thank you.